Under wraps for 13 years, the U.S. on Friday released once-top secret pages from a congressional report into 9/11 that questioned whether Saudis who were in contact with the hijackers after they arrived in the U.S. knew what they were planning. 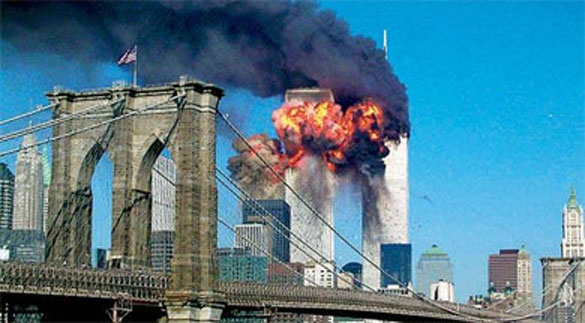 FILE - In this Sept. 11, 2001 file photo the twin towers of the World Trade Centre burn behind the Empire State Building in New York after terrorists crashed two planes into the towers causing both to collapse.

The newly declassified document, with light redactions, names people the hijackers associated with before they carried out the attacks, killing nearly 3,000 people in New York, Washington and on a plane that crashed in Pennsylvania. It identifies individuals who helped the hijackers get apartments, open bank accounts, attend local mosques and get flight lessons. Fifteen of the 19 hijackers were Saudi nationals and several were not fluent in English and had little experience living in the West.

Later investigations found no evidence that the Saudi government or senior Saudi officials knowingly supported those who orchestrated the attacks. But lawmakers and relatives of victims, who don’t think all Saudi links to the attackers were thoroughly investigated, campaigned for more than 13 years to get the final chapter of the 2002 congressional inquiry released.

Saudi Arabia has called for the release of the chapter since 2002 so the kingdom could respond to any allegations and punish any Saudis who may have been involved in the attacks.

“Since 2002, the 9/11 Commission and several government agencies, including the CIA and the FBI, have investigated the contents of the ‘28 Pages’ and have confirmed that neither the Saudi government, nor senior Saudi officials, nor any person acting on behalf of the Saudi government provided any support or encouragement for these attacks,” Abdullah Al-Saud, Saudi Arabia’s ambassador to the United States, said in a statement Friday.

House intelligence committee Chairman Devin Nunes said that while he supported the release, “it’s important to note that this section does not put forward vetted conclusions, but rather unverified leads that were later fully investigated by the intelligence community.”

However, others — including Former Florida Sen. Bob Graham, the co-chairman of the congressional inquiry — believe the hijackers had an extensive Saudi support system while they were in the United States. Graham has said that the pages “point a very strong finger at Saudi Arabia as being the principle financier.”

Former President George W. Bush classified the chapter to protect intelligence sources and methods, although he also probably did not want to upset U.S. relations with Saudi Arabia, a close U.S. ally. Two years ago, under pressure from the families of those killed or injured on Sept. 11, and others, President Barack Obama ordered a declassification review of the chapter. Director of National Intelligence James Clapper conducted that declassification review and transmitted the document to Congress, which released the pages online a day after Congress recessed ahead of the national political conventions.

Several investigations into 9/11 followed the congressional inquiry, which released its report — minus the secret chapter — in December 2002. The most well-known investigation was done by the 9/11 Commission, led by former Gov. Tom Kean, R-N.J., and former Rep. Lee Hamilton, D-Ind.

Kean and Hamilton said the 28 pages were based almost entirely on raw, unvetted material that came to the FBI. They said the material was then written up in FBI files as possible leads for further investigation.

They said the commission and its staff spent 18 months investigating “all the leads contained in the 28 pages, and many more.” The commission’s 567-page report, released in July 2004, stated that it found “no evidence that the Saudi government as an institution or senior Saudi officials individually funded” al-Qaida. “This conclusion does not exclude the likelihood that charities with significant Saudi government sponsorship diverted funds to al-Qaida.”

Some critics of the commission’s work say the commission failed to run down every Saudi lead and say various agencies obstructed its work. Kean and Hamilton also complained that various government agencies withheld relevant information.

Rep. Stephen F. Lynch, D-Mass., a long-time advocate of the declassification, said the release allows for greater transparency about the investigation into 9/11. “Releasing the contents of the 28 pages will answer some of the many questions that remain,” Lynch said. “It may help us at last hold those who are responsible accountable.”