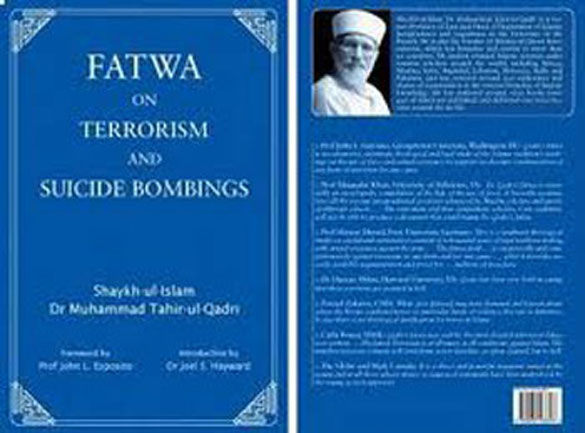 There can be two opinions on Dr Muhammad Tahir-ul-Qadri’s political postures in Pakistan and his flamboyant behaviour. But his work on Islamic teachings on terrorism and suicide bombings deserves unqualified praise. His erudition is impressive. He is a former Professor of Law and Head of Department of Islamic Jurisprudence at the University of Punjab and studied classical Islamic Sciences under eminent scholars in many countries.

A fatwa is just an opinion by an Islamic jurist, not a judicial ruling. This fatwa has won high praise from authorities such as Professor John L. Esposito and the Islamic Research Council at Al Azhar in Cairo. Prof. Muktedar Khan of the University of Delaware aptly calls it “an encyclopaedic compilation of the Fiqh (the law) of the use of force. It basically accumulates all the various jurisprudential positions advanced by Muslim scholars and jurists of different schools… The extremists and their sympathetic scholars, I am afraid, will not be able to produce a document that could trump Dr Qadri’s fatwa.”

This massive work begins with an exposition on the meaning of Islam. It “means safety for all of humanity”. The chapters that follow cover, with copious reference, themes such as the unlawfulness of indiscriminately killing Muslims; indiscriminately killing non-Muslims and torturing them even during times of war; the protection of the non-Muslims’ lives, properties and places of worship; and the unlawfulness of forcing one’s belief upon others and destroying places of worship. Legal maxims concerning the basic rights of the non-Muslim citizenry of an Islamic state on rebellion and on “the peaceful method of social and political struggle” are set out in detail.

This book deserves to be read widely.