Acknowledging, Then Unravelling, the Image of the ‘Good Muslim’

An Ordinary Man’s Guide to Radicalism: Growing up Muslim in India 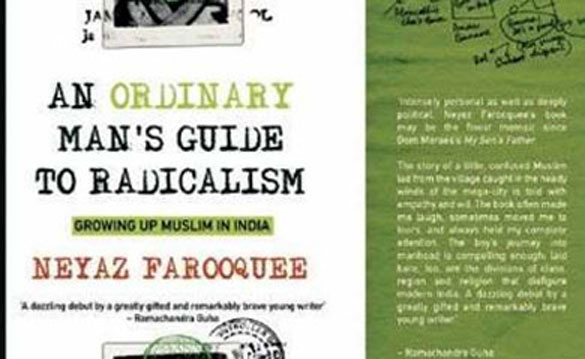 Just a little boy of ten, Neyaz Farooquee left the cosiness of his village in Bihar for the chaos of Delhi’s Jamia Nagar looking for a better education and prospects. Homesickness, the pressure of his family’s expectations, the transition to young adulthood, his increasing disinterest in academics and increasing interest in politics and his own Muslim identity – Farooque’s memoir touches on many aspects of his life. However, the Batla House encounter of 2008 stands out as the defining event in his and many other Muslims’ lives – the moment when every other personal trait was pushed aside for the creation of a politicised Muslim identity.

The story alternates between two different phases of Farooque’s life, split by the encounter – his life in Jamia Nagar before and after the event. Farooquee’s self-awareness as an author comes through in his narrative structure; his use of Hindustani words and phrases, sometimes without translation, adds to self-representation. The language – that mix of Urdu and Hindi that populates Muslim households in northern India – transported me to an unidentifiable place close to home, playing upon the familiarity of shared cultural values.

The parallel narratives demonstrate that there are many Farooquees contained in one Farooquee and it is difficult to differentiate them into neat categories separated by time and space.

A sense of alienation and an awareness of how others perceive him, a Muslim, tie together Farooque’s otherwise parallel narratives. In one chapter, after the encounter, Farooquee frantically deletes numbers and contacts of friends and acquaintances from his phone and social media. He writes, “I unjoined every community that I thought might even remotely appear like a Jihadi influence: Islam, Quran, Urdu poetry.” In the previous chapter, we see a young Neyaz deeply upset about not having any playmates in his new neighbourhood.

At another point, he rummages through all his belongings to ensure that nothing in his possession could be “taken as evidence of jihadi literature.” As he tries to view his collection of letters, poems, jokes, unfinished lists, newspapers and magazines through the eyes of the police and the news channels, his diverse range of experiences begins to acquire a single shade. Farooque is left with only one thought about each of his possessions: Will it make him look like a terrorist?

Although Farooquee is critical of the perceptions of the Self and the Other, at times he seems to cater to the non-Muslim reader’s questions about the ‘secret’ life of the Muslim. There is always the question of the degree of religiosity observed by a family. Then there are other questions that Farooquee’s childhood stories address: What does your family think about cow slaughter? They oppose it when others around them oppose it as they do not want sentiments to be hurt. Is circumcision painful? Not at all. You can hardly feel it when it happens.

As a Muslim, I often find myself tiptoeing around such questions about my religious identity. I wonder about how to present the most neutral and accommodating answer that my religion may have to offer, and do so without sounding apologetic. What makes Farooquee’s writing so remarkable is the frankness with which he portrays his intimate thoughts and interactions.

Just as he portrays the cow-protecting, patriotic ‘Normal Human Being’ within the Muslim man, Farooquee also highlights opinions he used to hold – his support of Saddam Hussein and his justification of Osama Bin Laden’s actions, for instance – that may not sit well with many, including his present self.

Farooquee makes it clear that he’s aware of how others perceive a young Muslim man living in a ghettoised Muslim area, and he still puts himself out there – for you to judge him, and then hopefully reflect upon your judgment; just as he reflects upon the judgments he made about the Other. His candid and thorough narrations of events are gripping, at times intensely emotional and heart breaking, and other times heavy with cynicism, of the kind found in the self-deprecating humour of Muslims discussing the present state of the country.

The book brings out the weight of the conflicting identities that Muslim children and youth in India carry today. Farooque’s memoir makes you question whether Muslims can develop a sense of self and community without feeling thwarted by the politicisation of their Muslim identity.

Aamena Ahmad, 23, recently finished a consultancy assignment with the United Nations Institute of Training and Research (UNITAR) after completing her Masters from the Graduate Institute of International and Development Studies, Geneva.