To Ayaan Hirsi Ali – The Problem is Not with Islam, but with the Author

Authors who publish books generally want to sell them. Well, what sells better then timely, dramatized sensationalism with a personal angle, which reinforces readers’ latent fears and beliefs? 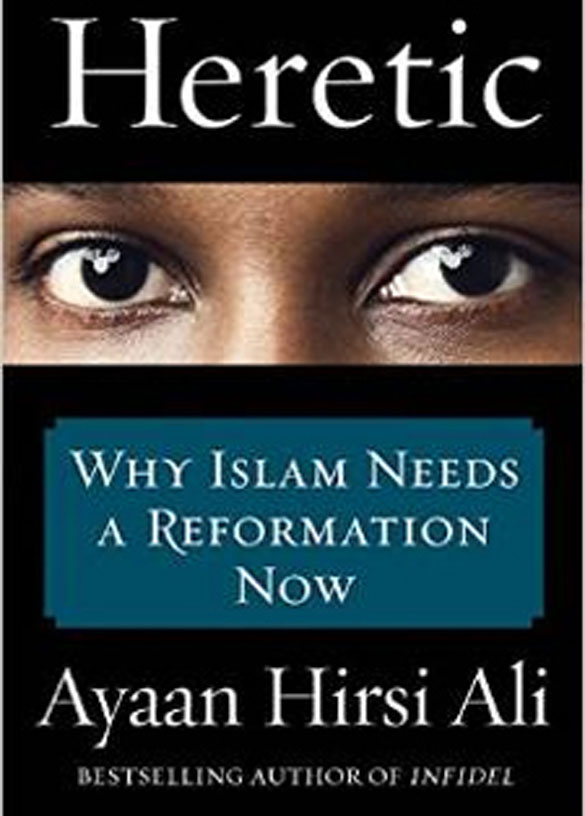 After reading Somali-born author and anti-Islam activist Ayaan Hirsi Ali’s disturbingly deceptive new book, Heretic: Why Islam Needs a Reformation Now, I can confidently vouch that this read is exactly that: Dramatized sensationalism with a personal angle that reinforces the larger audience’s fears and suspicions.

The book’s abject flaws begin with the introduction, which doggedly fixates on media reports disproportionately covering slanted stories of terrorist acts involving Muslims in destabilized and conflict-ridden regions of the world — without providing any crucially relevant context or background.

All, of course, to make the case that Islam is not a religion of peace.

Anyone who relies on such reports to draw their conclusions about the world’s second largest religion might agree with that assumption, but they would be wrong.

It goes on to leave the reader with an impression of a woman who has endured hardships in her personal life that continue to haunt her and unfortunately prohibit her from objectively viewing the religion she was born into – one that she, decades later, still clearly holds responsible for her traumas.

In her newest book, Ali, who is not an expert on Islam and has no formal religious training or qualifications, calls for a revolution within Islam similar to the Protestant Reformation that resulted from criticism of the Catholic Church.

She pleads for adherents of the world’s second largest religion to reject core tenets of the Islamic faith, which she has referred to in the past as a “destructive, nihilistic cult of death,” and instead embrace an almost Unitarian Universalist brand of Islam that, among other outlandish modifications, rejects the veracity and validity of the revered Prophet Muhammad.

Ali might as well ask for Earth to stop rotating on its axis, as the chances of that happening are probably equally as unlikely.

Being born and raised in a Muslim family does not make one an expert on Islam. Her Orientalist approach to “reforming Islam” calls for dissociation from, and outright rejection of, its basic, fundamental principles – this, despite the fact that she has yet to exhibit a firm grasp of what these principles actually convey.

As a woman, I empathize that Ali was subjected to female genital mutilation at the tender age of five while her father, who was a politician, was imprisoned. Frankly, it is inconceivable and unacceptable that girls and women are still forced to endure this unethical, abominable practice.

But Ali should stop spreading misinformation and educate herself on the fact that this barbaric practice predates Islam. It is not rooted in Islamic practices and in fact stems from cultural practices deeply rooted in certain segments of religiously diverse African populations.

Islam does not oppress women, as Ms. Ali often and wrongfully asserts. In fact, if practiced as intended, it actually liberates women from patriarchy and objectification.

According to today’s societal standards, modernization has led women to believe that our liberation is directly proportional to the height of our high heels, square inches of skin on display for visual consumption and the sexiness and marketability of our appearance.

Perhaps Ms. Ali can be forgiven for not knowing that Islam was the first religion to grant women rights to property and wealth inheritance; that it banned the horrible practice of female infanticide during a period in history when burying newborn infant girls was considered normative; that it encourages women to keep our family names even after marriage, so as to maintain our own individuality.

But ignorance is never an excuse for willfully perpetuating intolerance towards an already marginalized group of people whose religion is demonized on a daily basis.

Ms. Ali alleges she was forced to flee to the Netherlands to escape a forced marriage. As a woman myself of South Asian heritage, I know of many cases where Hindu, Muslim, and Sikh women have been pressured into arranged marriages against their will. But, Islam cannot be scapegoated for Ms. Ali’s disturbing circumstances. Religion is not the culprit; cultural traditions are responsible for the pressuring of women and girls to enter into marriages against their will. Islam unmistakably outlines that a woman’s consent is mandatory for marriage. Therefore, coercion is prohibited in our faith.

She has often said that according to her, the problem does not lie with Muslims; it lies within the tenets of the faith practiced by Muslims. I would argue that the problem is not with the tenets of Islam, but rather the way Muslims improperly practice their faith or mix it with cultural practices. If she wishes to salvage any credibility, Ms. Ali must stop erroneously conflating religion with culture to justify her unwarranted criticism of Islam.

The problem that exists is not within Islam; it is among the less than one percent of its adherents who have limited access to resources and jobs, who have been victimized by failed policies and corrupt governments, who misunderstand or misinterpret its teachings, who have granted precedence to their own egos and greed, who prioritize personal and political agendas over its tenets and who have lagged far behind in adapting to the 21st century.

Unfortunately, by virtue of biased reporting and a myriad of other factors, the actions and voices of this minuscule minority have been amplified and provided a platform to wrongly define and misrepresent Islam in Western society. And while failed governmental policies (in the U.S. and abroad), destabilization and multiple invasions coupled with more than a decade of war can never justify acts of terrorism, this context is simply important to help explain the motivation for terrorist groups who have capitalized on these factors in the most recent decade to build their ranks.

During a recent appearance on The Daily Show, Ali baselessly claimed that “Muslims were responsible for 70 percent of violence in the world today.” Later, she amended this unsupported claim to “70 percent of all fatalities in armed conflicts around the world last year were in wars involving Muslims.”

What she still failed to mention is that a bulk of these casualties, mostly Muslim, occurred in Syria, which recently entered its fourth year of a bloody civil war that has exacted a tremendous toll on its people, but still has been largely left ignored by the world’s superpowers.

Any dialogue seeking resolution for conflicts plaguing the Muslim world is incomplete without taking into consideration the many factors that have contributed to destabilization in these regions across the globe. Ali’s approach is also especially problematic because it presumptuously categorizes the followers of the world’s second largest – and fastest growing – religion into restrictive labels and proceeds to dissect and analyze them through a one-dimensional, myopic lens.

Islam is not a monolith. As The Reluctant Fundamentalist author Mohsin Hamid pointed out eloquently, there are more than 1.6 billion Muslims in the world, and each individual has unique life experiences and perspectives. It is disingenuous to lump a large group into a single category and paint them all with the same tainted brush.

Ali stresses: “The assumption is that, in Islam, there are a few rotten apples, not the entire basket. I’m saying it’s the entire basket.” But in order to effectively determine whether to direct our focus on the apples or the basket, we must first educate ourselves on the actual scope and source of the problem and also verse ourselves on the proper, contextualized understanding of Islam.

Once again, Ali has demonstrated a failure to do both. But judging by the latest round of media appearances while promoting her most recent, sensationalized book, she will undoubtedly still turn a nice profit.

Dr. Zainab Chaudry is a spokeswoman and Maryland Outreach Manager for the Council on American Islamic Relations, the nation’s largest Muslim civil rights and advocacy organization. She is a Board Member of Interfaith Action for Human Rights, and serves on the Taskforce of Bilal Initiative – an initiative designed to expand dialogue on racism and prejudice within American Muslim communities. You can email her at zchaudry@cair.com.