Name of the Book: In Search of Oneness—The Bhagavad Gita and the Quran Through Sufi Eyes 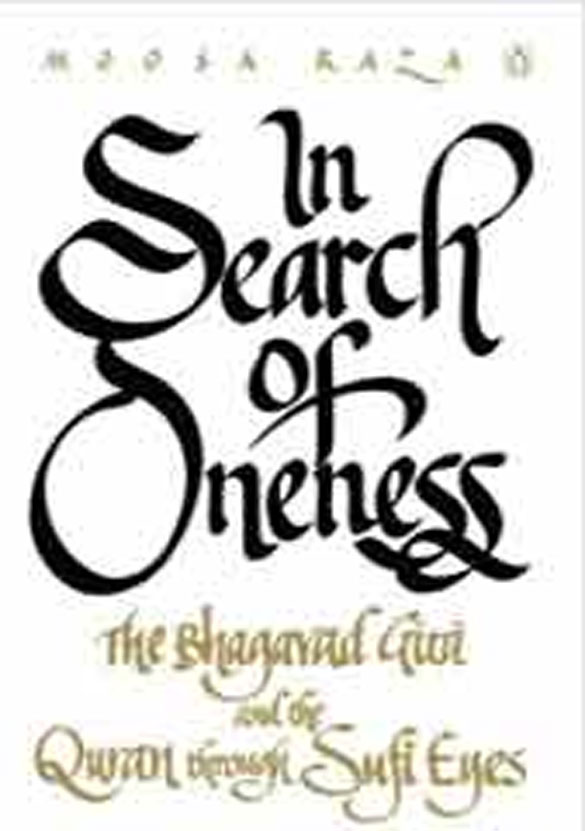 In our ‘global village’ today, peace crucially depends on harmonious relations between people from different faith communities. That, in turn, requires people of faith to understand each other’s religions in an empathic, unprejudiced way, through peaceful dialogue. In this remarkable and timely book, Moosa Raza attempts to do just this. His is an immensely valuable effort at seeking to promote peace and understanding between Hindus and Muslims through exploring and highlighting significant commonalities in the Bhagavad Gita and the Quran.

The author is well-equipped for the task he undertakes, being widely-read in different religions and being a spiritual seeker. The many roles that he has played through the years, including as principal secretary to the Chief Minister of Gujarat, chief secretary in Jammu and Kashmir, advisor to the Governor of Uttar Pradesh and secretary to the Government of India in the Cabinet Secretariat, provided him with exposure to experiences and situations that must have deeply influenced his inner journey and helped him to recognize the oneness behind the seeming multiplicity of religions, seeing them, as he puts it, through ‘Sufi eyes’.

In his Introduction, Raza writes: ‘It is very unfortunate that though the Hindus and the Muslims in India have been living together for more than a thousand years, knowledge about each other’s religious books is often absent, and if present, it is generally superficial.’ He sees his book as attempting to address that gap.

While Raza notes that it is not true that there are no differences between religions, he points out that ‘a civilized and rational approach’ shows that they all share ‘a common denominator’. ‘It behooves us to recognize the dignity of difference […] and move towards that underlying denominator,’ he says. In this regard, he urges us to recognize that in place of tolerance (which, he rightly remarks, denotes something unpleasant that requires to be tolerated), what is needed for interfaith relations is ‘respect for each other, born out of understanding and appreciation.’ And that is just what he seeks to do through his study of the Quran and the Gita.

‘Hindus and Muslims of India especially,’ Raza urges, ‘must recognize, understand, appreciate and respect the religious texts of each other.’ He cites this brilliant couplet from the noted Urdu poet Ghalib to drive home the point:

If man were to come out of the self-limiting veil that covers his eyes, what glorious revelations he will see in every faith!

‘Every people is on the right path, in their faith and in the direction of their prayer,’ Raza quotes the noted Sufi of Delhi, Hazrat Nizamuddin Auliya (b. 1238), as saying. This recognition of spiritual universality can enable people to appreciate and value the truths contained in spiritual traditions other than the ones they have ‘inherited’, as it were, by birth.   And that is just what happened with Raza, born in a Muslim family, as he began to study the Gita and several other scriptures after studying the Quran.

In studying the Gita and appreciating its wisdom, he was not doing something really new, Raza tells us. There have been other Muslim scholars who, too, have studies and written about Hindu scriptures and have recognized the truths that they contain. Raza tells us, for instance, of Faizi, court poet of the Mughal Emperor Akbar, who translated the Gita into Persian in verse form, using Sufi terminology. We learn about Dara Shikoh, son of Shah Jahan, known for his deep interest in Vedanta, who translated the Upanishads into Persian as the Sirr-e Akbar (‘The Great Secret’) and who referred to the Upanishads as ‘the fountain of reality and the ocean of monotheism, being in complete accord with the Glorious Quran’. Dara, we also learn, authored the Majma al-Bahrain (‘The Confluence of the Two Oceans’), through which he attempted a confluence of Sufism and Vedanta. A contemporary of Dara and a fellow Sufi, Abdur Rahman Chishti, Raza tells us, translated a commentary on the Gita and believed that it contained ‘the secrets of tawhid’, which, Raza says, ‘means the oneness of God, and in Sufi terminology it means the Unity of Being—Wahdat al-Wujud’. Another such person was Khwaja Dil Mohammad (1884-1961), a mathematics teacher from Lahore who, we are told, had great love for the Gita and translated it into Urdu with the title Dil ki Gita (‘Gita of the Heart’).

Raza takes us along with him on his personal journey in search of Truth. It was a search, he tells us, for a personal God, ‘a God whose presence is palpable, felt in the soul, in the innermost recesses of my being’, as well as for religion itself—‘a religion which could reconcile me with myself.’ He movingly describes his transformation from a young lad from an orthodox Muslim family who turns skeptical of the claims of religion and is convinced that God is an illusion, and then who, through a series of experiences and encounters, is led to revise his understanding of things and comes to recognize the reality of God. His journey unfolds as he begins to study the Quran, and then other holy books, such as the Gita, the Upanishads, the Bible, the Dhammapada, and the works of Bhaktas and Sufis, among others, and meets men of great faith and uprightness, Hindus and Muslims, whose lives have a profound impact on him, including on his views about religion.

As Raza recounts aspects of his remarkable spiritual journey, he reflects on what he believes are some of the major common teachings of the Quran and the Gita—including the oneness of God, God’s nearness to us, the importance of God-consciousness and of remembering Him often, and the need to seek refuge in Him alone, to lead an ethical life and to be non-attached. Both scriptures stress dedicating all actions to God and performing them for His sake alone. Both stress the transcendence of God and also the Divine presence in all creation and tell us to look for Him in the things He has created.

After studying the Quran and the Gita, Raza relates, ‘I found Allah to be as awe-inspiring as the Brahman of Bhagavad Gita.’ Raza quotes from mystics from various cultural backgrounds and different parts of the world and eras, from Guru Nanak, Mirabai and Sri Ramakrishna, to Shaikh Abdul Qadir Jilani, Rabia Basri and Jalaluddin Rumi, to stress that all accomplished mystics spoke the same truths, having arrived at the same realization. ‘Whether it is the Quran or the Gita, the Avesta or the Torah’, Raza says, ‘at heart they hold a message from the same Supreme Being.’

‘My search through various religions showed me,’ Raza says while concluding this must-read book, ‘that there were a million ways to reach God, but the end journey was the same whichever road you took.’