Hedonism Defines You by What You Have and Consume, Rather Than By What You Are

Name of the Book: Religion, Culture and the Ecological Crisis 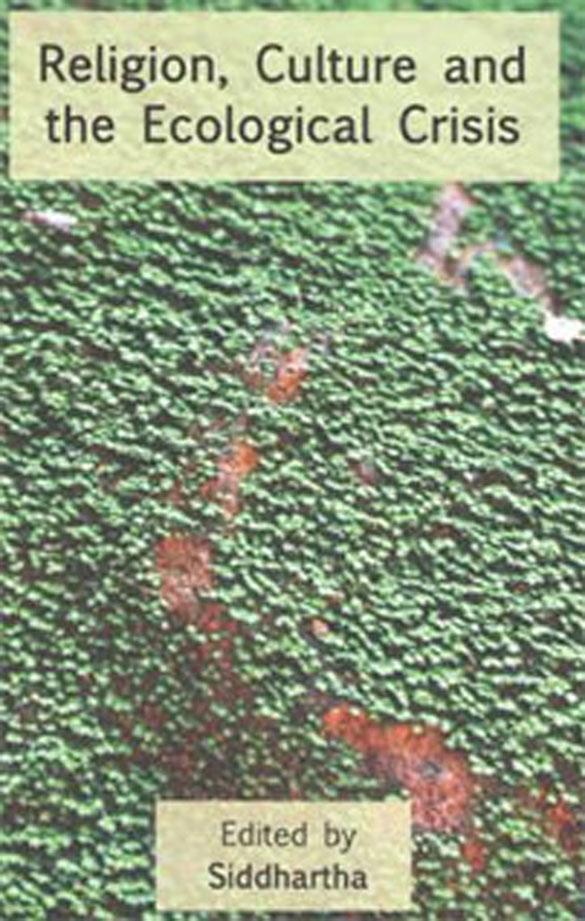 That human beings’ seemingly insatiable greed is rapidly destroying the earth’s delicate ecology, and even threatening to destroy the earth itself, is something that is now widely recognized, even though this realization is definitely not being accompanied by adequate practical measures to address what is literally a life-and-death question that now confronts all life-forms on earth.

Responses to the catastrophic global ecological crisis often take the form of proposing technological solutions—for instance, advocating solar energy instead of petrol, organizing tree-planting drives, recycling paper, and so on. While every such effort is valuable and necessary, clearly they are not adequate in the face of the magnitude of the crisis we are faced with.

At root, the global ecological crisis stems from a certain worldview that is now dominant, even hegemonic, globally—the worldview of Hedonism. According to Hedonism, the purpose of human life is to maximize sensual stimulation, encapsulated by the alluring slogan ‘Eat, drink and make merry!” Life, for hedonists, is—or, rather, ought to be—one long, non-stop party. Hedonism defines you by what you have and consume, rather than by what you are. The more ‘good’ things you own and ‘enjoy’ the more ‘successful’ you are considered to be.

Hedonism demands ever-increasing consumption of goods and services, and this means ever-increasing depredation of the environment. Since each little thing we consume—even a glass of water or a pencil—represents a depletion of the earth’s limited resources, Hedonism, now gone completely wild, is playing havoc with the global ecology, as this timely book cries out to us to recognize. The book reminds us that the ecological crisis is, at root, a spiritual one, rooted in a crisis of worldviews, and that; therefore, the solution to the crisis must be rooted in a transformation of our understanding of our place in the cosmos. Mere technical solutions cannot do much if our underlying worldview, based on Hedonism and endless consumption, remains unchanged.

The contributors to this volume represent a diverse range of religious and spiritual perspectives, including Hindu, Islamic, Christian, Buddhist, Sikh, and secular humanist. Despite their differing beliefs about the reality of the cosmos, their spiritual commitments lead them to argue for pretty much the same things, a remarkable testimony to the importance of interfaith dialogue and solidarity to work together for the common cause of protecting the global environment, an issue that intimately concerns us all, irrespective of our religious beliefs and other differences. Working for ecological sanity can, they show, also become a powerful means to bring people of different faith commitments to bond together—a desperate need today in a world that is being torn apart by bloody conflicts in the name of religion and ideology.

Religions can, of course, be diversely understood, often in very contradictory ways. As the contributors to this volume tell us, they have been—and continue to be—interpreted to seek to justify the pillage of the environment (reflected, for instance, in the notion that God has given man complete dominion over nature and all other beings and that these exist to serve him) and to minimize the importance of bothering about the environment (the suggestion, for instance, that this world is a mere illusion, or the argument that the only world we should be concerned about is not this one but, rather, the world after death). Such attitudes, the book brings out, are shared by a significant number of people who claim to follow a range of different religions. In this way, institutionalized religiosity, it suggests, has often not only ignored the harm that human beings do to the environment but has also actively sought to justify it.

At the same time, though, the book reminds us, there are alternate ways of interpreting the very same religions, ways that seek to sensitize us to our intimate inter-connectedness with the rest of the earth and our need to care for it. They provide valuable spiritual inspiration that can enable people of faith to challenge the hegemony of the hedonist worldview and the indifference of institutionalized religiosities to the environmental crisis and to inspire them to engage in practical action to address it.

Each religion has its own specificities that set it apart from other religions, and so it is to be expected that their understandings of the relationship between human beings and the rest of the cosmos would differ in some major respects. Yet, despite such different core beliefs, the major religions of the world, this book shows, can be interpreted in a manner to indicate that they share a common concern for the earth and its environment. Notwithstanding their differing premises and distinct fundamental beliefs, the different religions can thus, if understood suitably, be seen to uphold certain common goals, one of them being a passionate concern for protecting and promoting the earth’s environment and for caring of non-human forms of life. The Jain stress on non-violence, Hindu teachings about respect for nature, the Buddhist notion of the interdependence of all beings, Islam’s teaching that man has been appointed by God as a trustee on earth, Sikhism’s reminder that we humans are just a tiny speck in God’s enormous creation and so we should abandon our pretensions of being masters of the entire world, Jesus’ message of a simple lifestyle—all these and more are teachings that, if taken seriously and sought to be lived out personally by believers can make much of a difference to the state of the world’s environment.

Despite their theological differences, the different religions, as this book admirably brings out, stress certain common values and ethical principles that they exhort their followers to exemplify in their personal lives. Some of these have crucial ecological implications. If those who claim to be followers of these religions take them seriously, they can, by embodying them in their day-to-day lives, do their valuable bit as far as environmental protection is concerned—at the very least by leading a less ecologically-damaging lifestyle. These values include non-greed and non-acquisitiveness, simple living, self-restraint, compassion and care for others (including non-human beings), all of which sharply undermine the logic of Hedonism that insists that human beings be governed by the dictates of consumerism.

According to the ideology of Hedonism, we are on earth just to have a ‘good time’—to maximize the quantum of sensual stimulation that we can experience in our short stay here. In contrast, religions tell us that our presence on earth is for a very different purpose. They remind us that this life is a testing-ground. Life, they say, does not cease with the dissolution of the body. Rather, it continues into eternity, even after we have left our bodies behind on our inevitable physical death. They inform us that our future in the everlasting Hereafter is shaped by our actions in this world.

The theistic religions tell us that God is aware of every single action of ours—feeling, thought, word and deed. They inform us that our good deeds can help us gain a good fortune in the life after death, and that; conversely, our wrong deeds will work against us, in this world and/or in the next. They stress the need for constant awareness of God and His presence and for seeking to do His will—to do what He wants us to do and to refrain from what He wants us to refrain from.

These teachings have very vital ecological consequences. Consciousness of the fact that God is aware of our every action and that our every action will have consequences for us in this world and/or in the next can be a powerful means for us to transform our lifestyles and to become more ecologically-intelligent. If you know that God does not want you to be greedy and that rampant greed will work against you in the Hereafter, you may be led to refuse to buy that smart-looking, heavily-discounted pair of shoes even though you already have a pair too many. Knowing that helping animals in distress is something that is pleasing to God and also something you will be rewarded for, in this world and in the next, may enthuse you to join a campaign to resist the felling of a forest to make way for a dam. If you know that God does not want you to waste things, you may make it a point not to leave the lights on when going out of a room or to ignore a leaking tap, even if it is in someone else’s house. Awareness that God knows every action of yours and that you will have to account for it to Him in the Hereafter may deter you from buying a packet of half a dozen ballpoint pens when you actually need just one. In ways such as these, belief in God can work to make you lead a more ecologically-sensible life.

This book is a powerful reminder of the fact that the ecological crises that the globe is confronted with cannot be countered unless people—individuals and groups—transform their worldviews and learns to restrain their greed. This involves re-thinking our understandings of ‘development’ and ‘progress’ at a very fundamental level, and, beyond that, the very purpose of our life on earth. Ultimately, then, it is a spiritual issue.

It is one thing to decry the ecological crisis and stress the need to be eco-friendly, but quite another to actually do practical things to help protect and promote the environment. It would have added much value to the book if its contributors had described what practical efforts, if any, they have themselves made that have helped enhance the environment, even in a small way, or any lifestyle-changes they may have tried to experiment with, such as, perhaps, to buy and consume less. Sadly, the book has little of this.

That, plus the not-very-careful editing of some bits of the volume and certain chapters that are unnecessarily long and theoretical and that could easily have been summarized into half their present size or even avoided altogether (thereby making the book take up less paper and printing ink and, in that way, enabling it to have less of an impact on the environment) should not, however, detract from the book’s crucial message.