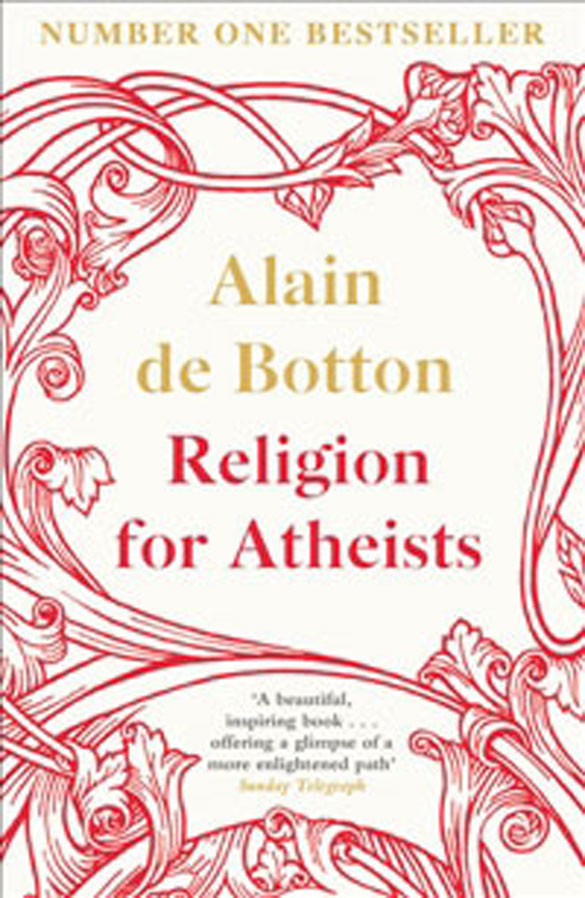 Name of the book: Religion for Atheists

Religious folks and atheists are, so you may think, by definition viscerally opposed to each other in their ways of perceiving life and the meanings they supply to it. Historically, the two have always been at loggerheads, and much blood has been spilled in the often deadly conflicts they have fought with each other. While believers in different religions have fought each other with deadly passion, at least sporadic efforts have been made to bring them together to discuss explore possibilities of peaceful co-existence and inter-faith dialogue. On the other hand, however, many religionists completely rule out the possibility of dialoguing with atheists. There is nothing at all, they believe, that they can learn from them. Likewise, many atheists, confirmed in their belief in the utter worthlessness of religion, instinctively balk at the suggestion that they can benefit from religion in any way and so see no need at all to dialogue with its defenders.

While the mere fact of believing in the supernatural unites believers in different religions and so forms a common platform on the basis of which they can dialogue with each other, religionists and atheists have not even that much in common. That is why dialogue between religionists and atheists has rarely been seriously pursued. Recognition and appreciation of the merits of each other’s beliefs or positions are generally branded as nothing short of sheer anathema.

This thought-provoking book seeks to argue for a partial reconsideration of the atheist position on religion. A self-confessed atheist, de Botton presents a thoughtful case for fellow atheists to re-think some of their deeply-held prejudices against religion. He delineates several aspects of popular religiosity which, he says, atheists could well emulate in order to supply their life with greater emotional depth.

Atheism, the denial of the existence of the supernatural realm, de Botton concedes, often fails to address human beings’ deep-rooted desire for meaning and purpose. If God doesn’t exist, as atheists believe, then human beings are often left groping with no absolute values to live by and unclear as to the very purpose of existence. If life ends with death and there is nothing beyond the grave or funeral pyre, then what is the use of living at all, people often ask. Is life, then, just about being born, eating, working, copulating, reproducing, decaying and dying? Are there no higher things to live for? If there is no hidden meaning behind suffering, how do we live through the stormy trials and tribulations that everyone has to face at almost every stage of life, without any hope for redemption? If there isn’t a higher principle, force or being to whom one is answerable, what is there to prevent people from giving vent to their bottled-up unbridled selfishness?

Based on an appreciative analysis of popular Christian, Buddhist and Jewish religiosity, de Botton contends that atheists can learn much from the ways in which religions fulfill human beings’ emotional needs and their need for ultimate meaning, which hard-nosed atheism, rooted in crass materialism, often fails to address. Crucial in this regard is the stress that religions place on kindness and tenderness—the need to be concerned with the travails of others and the capacity to be moved by the mystery of life. Religions have always stressed the importance of going beyond a narrow self-centredness, which de Botton rightly sees as rooted in capitalist ‘modernity’ and which atheists often are guilty of. Atheists could do well to learn from religionists’ capacity to empathise with others and be stirred by their pains. That would provide them a sense of meaning and purpose beyond self-aggrandizement and enable them to recover a degree of the emotional comfort that religion, with its stress on compassion, has traditionally provided.

This point relates to the larger issue of recreating a sense of community that religions promote. The decline of religion in many societies, de Botton rightly points out, has resulted in the collapse of traditional forms of communal life. Although much of it was oppressive and stifling for individual members of the community, traditional communal life often provided warmth, comfort, and safety and a sense of purpose. Atheism has singularly failed to develop any such alternative to communal life, leaving individuals pretty much alone to fight life’s many battles. This predicament can be, for most of us, frighteningly alienating. In this regard, de Botton appeals to his fellow atheists to sensitively appreciate the communal values and structures traditionally offered by religions. He even suggests ways in which atheists could adopt and adapt of some of these in order to provide atheists the comforts of communal life and participation that many religionists enjoy.

In traditional societies, religion played a major role in education. Much of education was religious, and most teachers were also religious people—priests, monks and so on. The focus of traditional religious education, de Botton writes, was on the development of the human personality as a whole, and not simply on the sharpening of the intellect. The inculcation and internalization of cardinal values was a major focus of this system of education. In contrast, de Botton indicates, ‘modern’ education, based on atheistic or materialistic premises, almost completely ignores the value dimension, leaving it to the individual to develop on his or her own and only if he or she chooses to. What it is essentially concerned about is how to train the student to fit into the market, as a cog in a giant economic wheel. This has had woeful consequences for peoples’ emotional lives and their capacity to handle relationships, while also leaving them bereft of any purpose in life other than participating in a maddening race for material acquisition. That this has led to mounting and almost uncontrollable alienation and anomie is obvious. Deeply pained at this, de Botton appeals to fellow atheists to study traditional models of religious education, borrow some of their methods of value education and draw lessons from their more holistic understanding of what education is, or, rather, ought to be, all about.

Religions have been the driving force behind the creation of immensely rich art and architectural treasures, these being material expressions of deep-rooted emotions that they seek to evoke—compassion, love, suffering, the desire for ultimate release and so on. Religious icons and paintings have been carefully designed to trigger powerful emotional states. In contrast, ‘modern’ art seems insipid and lacks the same sort of capacity to stir the higher emotions, de Botton contends. Unlike religious buildings, modern structures are by and large strictly utilitarian, and, more often than not, plainly ugly. In contrast to the former, their purpose is not to engender awe, piety or transcendence. But these are values or states of being, de Botton argues, that human beings simply cannot live without. Denied these, the soul simply withers away. Atheists, he suggests, could develop new styles of art and architecture that are carefully calculated to provoke the same sort of powerful emotions that religious art and buildings do. In that, he writes, they can learn much from the forms and functions of churches, temples and monasteries as well as works of traditional religious art.

Clearly, what de Botton calls for is not a dialogue between religion and atheism but simply an appreciation by atheists of what he regards as the finer aspects of popular religiosity and their appropriation in order to make atheism a more appealing option. While admitting that in terms of addressing the emotional realm as well as vexing questions to do with the soul religion often seems to do a better job than atheism, he remains confident in his belief that in the non-existence of the supernatural. On this point, he evinces no interest at all in dialoguing with religionists. Yet, in contrast to many fellow atheists, his atheism has room for accepting and celebrating some of the empirically verifiable beneficial consequences of religion, which he urges his fellow atheists to imbibe. But in doing so and yet defending his insistence that the supernatural is merely a myth, what he doesn’t admit is that his atheism—his belief that there is no supernatural principle, force or being—is as much an empirically unverifiable belief as is the theism that he denies.

Be that as it may, this book makes for immensely enjoyable reading. If it does not go so far as to call for much-needed dialogue between atheists and believers, it serves a valuable purpose in indicating that there is much that atheists can learn from their traditional rivals. One hopes that the book might provoke religionists to similarly rethink their position on atheism, for even if they refuse to give up their belief in, and theories about, the supernatural, surely there is much that they can learn from the atheists’ understanding of the world, especially from their critique of the crass ignorance, corruption, superstition and oppression that has historically often been blessed in religion’s name.