Book Review: Pedagogy for Religion—Missionary Education and the Fashioning of Hindus and Muslims in Bengal 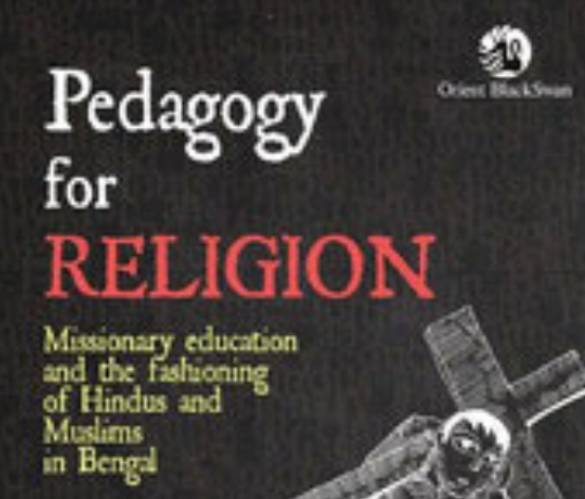 Name of the Book: Pedagogy for Religion—Missionary Education and the Fashioning of Hindus and Muslims in Bengal

The mid-nineteenth century was a period of massive ferment in India. The British had supplanted the Mughals as rulers of much of India, and, under them, new forms of knowledge and its dissemination were challenging centuries’-old traditions. Spearheading the spread of ‘modern’ education were the colonial state, European Christian missionaries (of various denominations), and Indian elites. These three sets of actors shared a common appreciation of ‘modern’, ‘scientific’ knowledge, but each had its own separate political and cultural agendas in doing so. How these multiple, often conflicting, agendas played themselves out on the Indian stage, and what this meant for how different sectors of the Indian population who took to ‘modern’ education’ perceived themselves is what this well-researched and thoroughly engaging book is about. It seeks to address this broad issue by focusing on the Bengal Province, which was one of the first experimental grounds of the new or ‘modern’ pedagogy. In particular, it examines the impact of ‘modern’ education on growing numbers of Bengali Hindus and Muslims in terms of their self-understandings. It highlights how ‘modern’ education, as differently conceived by the colonial state, Christian missionaries and Hindu and Muslim elites, had a major impact on transforming the ways in which large numbers of Bengali Hindus and Muslims understood their religious, gender and caste identities.

The arrival of ‘modern’ education in the non-white world is generally seen as heralding the advent of ‘the age of reason’, which, in turn, is seen as leading to a rapid undermining of the hold of religion, generally viewed in a negative light, on ‘the natives’. ‘Modern’ education is thus seen as both a ‘civilising’ as well as a secularizing force. But this commonsensical notion has little to commend it, Sengupta indicates, at least in the nineteenth century Indian context. ‘Modern’ education in Bengal, from the mid-nineteenth century onwards, Sengupta points out, was heralded by a number of actors who were deeply committed to one or the other religion, and most of them saw ‘modern’ education as also a means to spread and reinforce their religious beliefs among the Bengali populace. There was thus no radical disjunction between ‘modern’ education and religion. In fact, it was widely believed that ‘modern’ education, while doing away with ‘superstition’ in the name of religion, would work for the revival and spread of ‘true’ religion—which was, of course, interpreted differently by different sets of actors. At the same time though, actors, such as European Christian organizations, engaged in promoting ‘modern’ education as part of their religious missionary agenda hoped that their efforts would undermine and destroy ‘false’ religions—which is to say, all religions but their own.

Based on a close examination of documents, in English and Bengali, Sengupta discovers that ‘modern’ education in colonial Bengal led, in many cases, to reinforcing religious identities instead of undermining them. Christian missionaries saw the network of schools that they established as principally a means to spread Christianity among the non-Christians as well as to nurture and reinforce the Christian faith of the fledgling native convert population, whom they saw as still rooted in their pre-Christian past with which the missionaries were extremely uncomfortable. European Christian missionaries engaged in educational work understood their mission as rescuing the ‘heathens’ from ‘idolatry’, and for this purpose many of them regarded the colonial state as a blessing, working to legitimize it in terms of a supposed civilizing force. Their espousal of equality, such as reflected in their opposition to the tyranny of caste, did not go so far as advocating the equality of Europeans and Indians, or even of European and Indian Christians. The Christian identity they strove to fashion was very much rooted in British colonial supremacy.

Bengali Hindu elites or bhadralok did not lag far behind Christian missionaries in espousing ‘modern’ education and setting up ‘modern’ schools. Many of these, Sengupta shows, were exclusively for the bhadralok themselves, thus leaving out of their concern the vast majority of Bengalis—‘low’ caste and tribal people and Bengali Muslims. The cultural milieu of their schools, too, was rooted in ‘upper’ caste Hindu tradition, which, in turn, was seen as synonymous with Bengali or even Indian identity. The ‘modern’ education that they propagated was geared to spreading and reinforcing bhadralok culture, thereby legitimizing bhadraloksupremacy within the caste system and in Bengali society at large. Mirroring the hierarchical caste system while being a product of it, the ‘modern’ schools set up by bhadralok reinforced caste inequality. Many Bhadralok advocates of ‘modern’ education were at pains to distance themselves from the ‘low’ castes and tribals, whom they saw as ‘uncivilised’. Through ‘modern’ schools and the Brahminical Hindu culture that they actively propagated, however, somebhadralok hoped that the ‘low’ castes and tribals (who might have accounted for the majority of Bengal’s Hindu population) could be ‘civilised’ and their religious beliefs and practices be made more ‘properly’ Hindu. This concern was linked to broader efforts to create a sense of Hindu community, under the leadership of the bhadralok, and to consolidate Hindu numbers as political developments made the numerical strength of religious communities a decisive factor in determining the political influence of native elites.

Muslims formed almost half the population of pre-Partition Bengal. Most of them were converts from the ‘low’ caste and tribal populations, and the majority were peasants and landless labourers. Overall, and as in much of the rest of India, in Bengal Muslims lagged far behind Hindus in terms of ‘modern’ education. Yet, from the late nineteenth century onwards, efforts began being made by the ashraf or Muslim elites for promoting ‘modern’ education among their co-religionists. But, as in the Hindu case, these efforts were geared to reinforcing ashrafhegemony and internal social hierarchies. While Muslim elites did relatively little by way of establishing ‘modern’ schools for poor Muslims, they expended much energy in demanding separate religious education for rural Muslim children. Sengupta shows the political underpinnings of this demand, being related to the ashraf urge to construct a monolithic Muslim identity premised against the Hindu ‘other’ in order to reinforce the ashraf claim to represent all Muslims. This claim was a powerful lever to extract concessions from the colonial state, ostensibly for the benefit of all Muslims but, in actual practice, only further empowering the ashraf. Separate religious education for Muslim children aimed at clearly marking off Muslims from Hindus and reinforcing a sense of Muslim distinctiveness, whose political implications were to culminate in the demand for the partition of India. This education was geared to promoting scripturalist Islam, as against the popular religiousness of the rural Bengali Muslims, which was heavily soaked in ‘Hindu’ traditions. ‘Modernist’ Muslim educational reformers, like orthodox maulvis, saw the latter as sheer anathema for it threatened, in their view, to dissolve the boundaries between Hindus and Muslims that they worked to reinforce. For them, ‘modern’ schools, which also provided Islamic scripturalist education, were a means to make rural Bengali Muslims ‘proper Muslims’, whose religious beliefs and practices had nothing whatsoever to do with their Hindu ancestors or neighbours, and, indeed, were regarded as fundamentally opposed to them.

As Sengupta brilliantly shows, the ‘modernist’ educational project in India did not, contrary to what some might otherwise think, attack or even undermine religion. In some ways, it actually strengthened its hold and that of traditional elites. At the same time, it led to the homogenizing of religious traditions. Scores of schools now worked to spread both ‘modern’ knowledge as well as ‘orthodox’, scripturalist understandings of religion which, till then, had been limited only to a small section among the elites. In all three cases—Christian, Hindu and Muslim—this had major political implications, serving to construct an image of monolithic religious communities, led and controlled by their respective elites, whose authority was reinforced with the help of these new understandings of religion.