‘Our War in Afghanistan’ 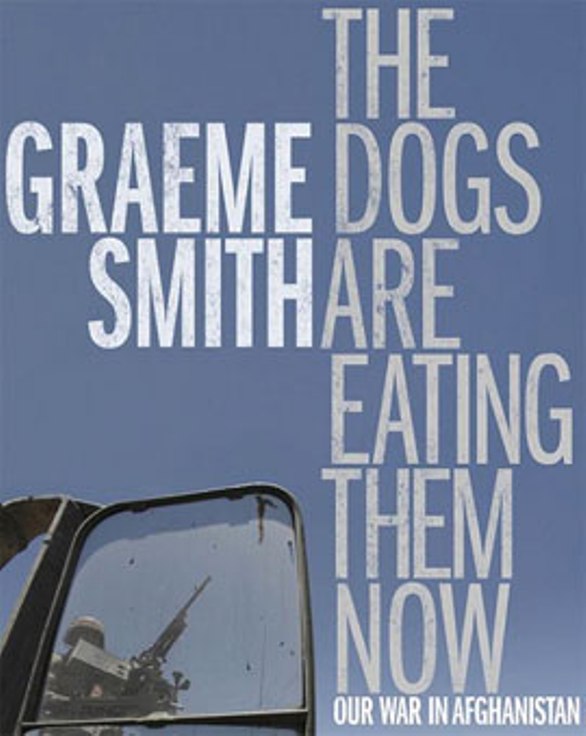 'The Dogs are Eating Them Now: Our War in Afghanistan’

Plato recommended that young men witness the battlefield as part of their essential grooming for adulthood. Graeme Smith was an idealistic 26-year-old reporter for Canada’s Globe and Mail newspaper when he was sent to southern Afghanistan in 2005, and the next six years he spent in the country was certainly an education, with Smith confiding at one point that “the charred flesh of suicide bombers got stuck in the treads of my shoes.” His education was also a painful process of disillusionment, as he witnessed all the ideals about the West’s grand vision for reconstructing the country (which he shared on arrival) crash on the brutal rocks of reality. This book is a searing, at times scathing account of Smith’s years in Afghanistan; indeed, a lesson learned the hard way goes deeper.

Smith first arrived in Kabul in 2005, when the War on Terror was at its “height.” He didn’t share Washington’s bloodlust after 9/11, but he writes that he was sympathetic to the idea of “mending the tapestry of our globalized society”: "I felt excited by the idea that the international community could bring the whole basket of civilization: peace, democracy, rule of law, all those things … We took it for granted that modern ideas about health, education and agriculture could lift any society out of poverty. We assumed that those efforts could be protected against any threat by our glorious armies, the most sophisticated forces ever fielded.” However, by 2005 the enthusiasm of the early years after the Taliban had been forced from Kabul in 2001 was already on the wane. Posted mostly in the ravaged southern Afghan city of Kandahar, Smith had a front row seat to watch that enthusiasm collapse completely.

The book doesn’t spend much time discussing the causes of the war, or even its place in the history of foreign interventions in Afghanistan. Its focus is instead on the Afghans and the foreigners trying to change them, providing a visceral ground-level account of the folly of what went on as the initial causes of the NATO intervention became blown away by the momentum of chaotic circumstances. “If you chart the violence in southern Afghanistan, the line resembles mountains, soaring peaks growing higher and higher … the idea of success hidden just beyond the next peak of violence,” but as the years stacked up it became less and less clear what “success” would actually mean. Let alone defeating the Taliban, building and supporting any solid institutions appeared increasingly futile. “[Foreigners] cleared, they held, they built - but it all fell apart in an instant … This point would get proven over and over, across Afghanistan. There would be an illusion of progress, a new institution or outpost, but everything could crumble in a few minutes,” Smith writes.

He was embedded with NATO and U.S. forces during the troop surge in 2006, which he describes in gritty detail here. He also led a deep investigation into the practice of international forces handing over captured suspected militants to Afghan authorities, (where it was known they would be tortured), as well as a study of the toxic subject of drug corruption, which reached into all aspects of Afghan politics. He is a brilliant, vivid writer, with a knack for summing things up in a telling aphorism. On the troop surge, he writes that it was “technically correct, but wrong in spirit, like telling an obese person with an eating disorder that they will die if they stop consuming food: a biological fact, but misleading.” Told by a senior general that “we’re kicking the hornet’s nest,” he replies, “Sir is there any time in real life when it would make sense to kick a hornet’s nest?” At times his anger boils over; discussing the torture by Afghan security forces in which NATO soldiers were complicit, he reflects bitterly: “The Westerners became intimately embroiled with a dirty war, and the filthy awfulness of it will remain a stain on their reputation.”

Overall, however, the overwhelming tone is of disillusionment rather than anger. Smith emerged from his experiences in Afghanistan a sadder, wiser man. By the end of the book, he recognizes a central paradox: Troops invariably made things worse in Afghanistan, yet so did pulling them out. He ends up making a case that may be easier to make intellectually than to apply politically, in favor of long-term, logistical, non-military international engagement in Afghanistan. Towards the beginning of the book, he quotes a soldier saying, “We cannot write ‘there be dragons’ in the blank spaces, cannot turn away and ignore countries that become dangerous.” When this is repeated in the conclusion, you understand from what has gone before that Smith appreciates the full weight of what he’s saying.