At the close of the US festival premiere of a documentary about the killing of the Saudi Arabian journalist Jamal Khashoggi, the audience rose to its feet, cheering. 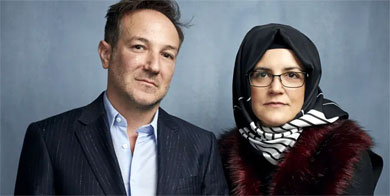 The Dissident’s tragic subject matter had already created interest, as had the glittering record of its director, Bryan Fogel. Critics were full of praise, with Variety calling it “an eye-opening thriller brew of corruption, cover-up and real-world courage”.

Alec Baldwin tweeted his approval, praising the “numbing and beautiful” film. “The truth is being dismembered in Washington,” he wrote. “But it is alive and well in the work of @bryanfogel.”

The documentary’s future looked bright, and after the premiere Fogel said he hoped that Riyadh’s powerful global lobbying machine would not mean it would be ignored. “In my dream of dreams,” he said, “distributors will stand up to Saudi Arabia.”

Yet, a month after that screening at the Sundance film festival, it is by no means clear that they have. The film-makers are still “discussing options”, they say, to get the best deal for The Dissident. Fans of the film fear its hard-hitting content has unsettled distributors who otherwise frequently snap up big documentaries during the run of Sundance. They worry that the film, which was independently financed by the Human Rights Foundation, could now suffer the fate of an episode of Hasan Minhaj’s Netflix comedy, Patriot Act, that also dealt with the Khashoggi killing. A Saudi complaint led to the removal of the episode. “It is vitally important to sustain attention to the continued lack of justice for the assassination of Jamal Khashoggi,” said Rebecca Vincent, the UK bureau director of the campaigning organisation Reporters Without Borders.

“Despite the initial international outcry, so far little has been done to impose concrete consequences on Saudi Arabia for this horrific attack, or for the broader dire press freedom climate in the country – which is also detaining at least 33 journalists,” Vincent said. “I would hope that reluctance of governments to take a firmer stance on these alarming violations is not spilling over into the film world. Jamal’s story deserves to be told.”

A year and a half after Khashoggi was murdered at the Saudi Arabian consulate in Istanbul, the precise events that led to his death remain a puzzle, despite the Saudi government’s execution of a group of unidentified “guilty” men. The killing is thought to have been a reaction to the Washington Post columnist’s criticism of the regime, and many, including the Central Intelligence Agency, now argue that Crown Prince Mohammed bin Salman could not have been ignorant of plans to silence Khashoggi.

But the focus of Fogel’s film is as much on the Saudi effort to control international dissent as it is on unmasking those who ordered the murder. While it contains detailed interviews with the Turkish officials who revealed Khashoggi’s killing, The Dissident also investigates the companies and governments that do business with the Saudi regime. This may have made it difficult to sell.

So may its examination of the hacking operation that led to the compromising of Amazon boss and Washington Post owner Jeff Bezos’s mobile phone account. An unsolicited friendly email from the Saudi prince is thought to have introduced a malicious file.

The story of Omar Abdulaziz, a Saudi activist and video blogger now living in Montreal, forms the heart of the documentary, and several of its revelations spin out from his experiences. Abdulaziz’s siblings have been imprisoned in Saudi Arabia as a result of his activism abroad, and he tells the film-makers he believes it was his connections with Khashoggi that led to his death.

It is also alleged that, like Bezos, Abdulaziz’s phone was hacked by the spyware programme Pegasus.

After the premiere, Fogel, who won an Oscar in 2018 for Icarus, the film instrumental in the banning of Russia from the Winter Olympics that year, told the audience he hoped The Dissident would “make other countries, their governments and business leaders reassess their relationship with Saudi Arabia until they reform”.

Original Headline: Powerful new Khashoggi film hits its mark … but will audiences get to see it?