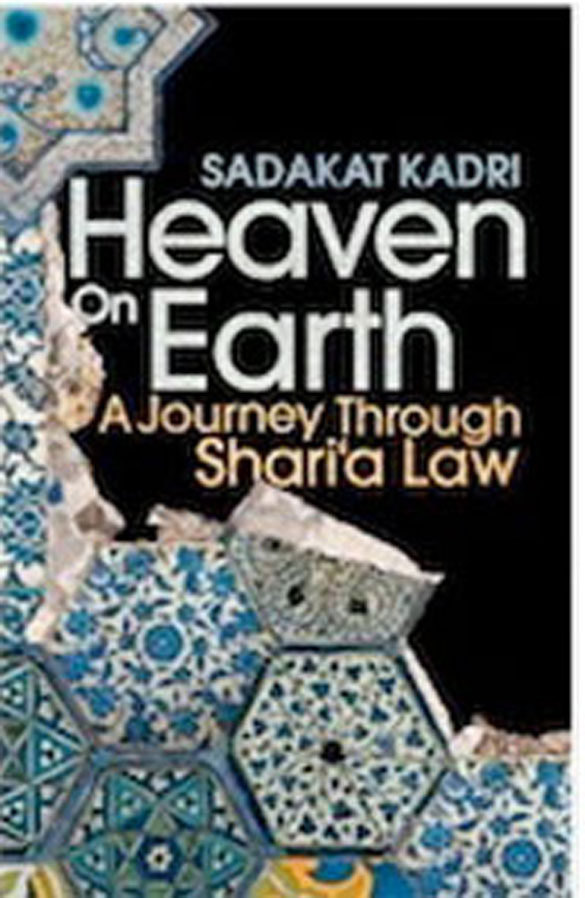 Sadakat Kadri is an English barrister, a Muslim by birth and a historian. His first book, The Trial, was an extensive survey of the Western criminal judicial system, detailing more than 4,000 years of courtroom antics.

In his new book Heaven on Earth, Kadri turns his sights East, to centuries of Shariah law. The first parts of his book describe how early Islamic scholars codified – and then modified – the code that would govern how people lead their daily lives. Kadri then turns to the modern-day, reflecting on the lawmakers who are trying to prohibit Shariah law in a dozen states, as well as his encounters with scholars and imams in India, Pakistan, Syria, Egypt, Turkey and Iran – the very people who strictly interpret the religious and moral code of Islam today. And some of those modern interpretations, he says, are much more rigid – and much more draconian – than the code set forth during the early years of Islamic law.

Islamic law is shaped by Hadiths, or reports about what Prophet Mohammad said and did. The Hadith, says Kadri, govern how Muslims should pray, treat criminals and create medications, among other things.

"It's a huge oral tradition which was set down in the 9th century and which was then, by some people, transformed into compulsion and rules," Kadri tells Fresh Air's Terry Gross. "It would be literally impossible to follow all of them because plenty of them directly contradict each other. So you have to make choices and Muslims have been making choices for ... the last 1400 years. And what's happened over the past 40 years is that in certain places, the hard-liners have come to the forefront."

In the early 1970s Libya, led by Moammar Gadhafi, became the first country to introduce Islamic criminal penalties outside of Saudi Arabia, Pakistan and Iran followed suit in 1979. Throughout the last three decades, the number of countries applying harsh interpretations of Islamic law has expanded.

"One thing I realized when traveling around the Muslim world is how closely these hard-line interpretations of Islamic law are associated with political consternation and turmoil," he says. "There isn't a country anywhere in the Muslim world which has been applying Muslim laws continuously for hundreds of years and which is drawing on genuine tradition. It's a revival of supposed traditions which don't really pay much heed to history at all."

Kadri addresses the hardliners in the prologue to Heaven on Earth, which starts with a disclaimer: "Lest it be necessary to say so – and it probably is," he writes, "[this book] does not intend at any point to challenge the sacred stature of the Prophet Muhammad, the self-evident appeal of Islam, or the almightiness of God."

Kadat says he wanted to make it clear that his book was not out to offend.

"It's a disclaimer to the extent that I'm pointing out what I'm not contesting," he says. "I'm not arguing the fundamentals of Islam. What I'm arguing about is the interpretation that's been put on those fundamentals over the last 1400 years. And what I'm arguing about is the interpretation of Islamic law that are being presented as sacred by hardliners. And that, I think, should be a proper subject to debate."

On interpretations of the Shariah

On why he wanted to write about Shariah law

"People just seemed to be arguing about Islam, Islamic law, the Shariah, without actually getting to the substance of what it was all about. So because I come from a Muslim background, I certainly had plenty of people I could ask. I started with my father. My father's also a lawyer. I asked him, 'So what is the Shariah? What does it say? Where is it written down?' And he didn't really have an adequate answers, as far as I am concerned. He said, 'It's what's regarded as God's law.' And I knew that. I didn't need to be told that. And the more I asked, the more I realized people just seemed to be ignorant. Muslims seemed to be ignorant, let alone the people who were attacking it without knowing what they were talking about."

On the word 'Shariah'

"It means the right path to follow if you want to attain salvation. It's a very spiritual concept. It's an idea of the right thing to do, how you attain salvation. And there's no denying that the human interpretations of the Shariah do contain some very repressive laws."

On the movement to ban Shariah law in America

"It's crazy, basically. It's this idea that Shariah is some kind of movement to take over the United States or a conspiracy to overturn American freedoms. That isn't what Shariah is. There are certainly hard-line interpretations of Islamic law. But these measures don't even claim to restrict themselves to that. They claim to prevent the courts from taking any account at all of the Shariah, which potentially means that a court can't, for example, take account of someone's will. If someone says they want to be buried according to Muslim rituals laid down in the Shariah, a court would theoretically not be able to take account of that. And, of course, it's possible to say, 'That's not what the law's aimed at. The law's aimed at something very different.' But as everyone should know by now, liberties begin to erode when you have laws that are too widely drawn. And laws which say that under no circumstances can a court take any account of the Shariah are necessarily discriminatory. They're necessarily over broad. And they necessarily create communal dissention for no good purpose. Because it's perceived by Muslims as an attack on Islam. ... I am absolutely sure that many of the people who support the laws and their sponsors are genuinely motivated by fear of Islamic extremism. Islamic extremism is something which I'm fearful of. I was around on September 11th and July 7th here in London when Islamic extremists blew lots of people up. I'm no fan of violent extremism from Muslims but these laws don't target that. They simply target the body of beliefs that Muslims call the Shariah."