'Pakistan on the Brink' 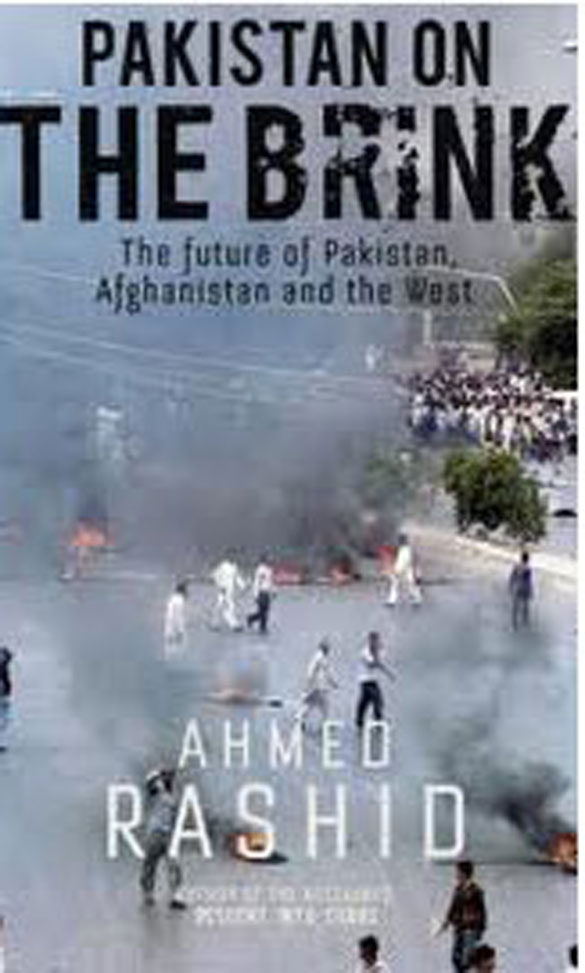 They say you should build your first house to sell, the second one to rent, and the third one to live in. With most trilogies, the sequence is almost always in reverse- simply because authors tend to give their best to the first book, what's left to their second, and only write the third to complete the trilogy. Author Ahmed Rashid's Pakistan on the Brink: The Future of America, Pakistan and Afghanistan is an exception, as he manages to make the sequel to the 'Taliban', (the bestseller that sold 1.5 million copies, and transformed Rashid into 'global sage'), and to his second, Descent into Chaos, an equally important volume.

In 'Pakistan on the Brink', Rashid has turned a harsh light on his country, chronicling how it has gone from holding all the cards on Afghanistan, to being viewed as the most unreliable card in the pack. "The world is calling Pakistan's bluff," he told me in an interview this month, "Nobody will bail it out this time. It is time to make a strategic shift in thinking- and to realise Pakistan's threats are not from external states like India and US, but from the internal state, terrorism, the economy, and joblessness."

In his preface to the book, Rashid calls this volume a collection of essays that can be opened anywhere, and be read separately from the rest. He hopes his trilogy will one day be read as "a single document of a terrible period of mankind's history, from which lessons learned" will not be repeated. Amongst those lessons he includes the US's decision to foster Jihad as a means to defeat Soviet communism, Pakistan's vilification of India, and employing Jihadists as a parallel foreign policy to trade and diplomacy, and the failure of the west to formulate a consistent policy on Afghanistan- which he says the US will "abandon" in 2014, without any of its promises on nation-building or women's rights, kept. The bulk of his criticism is however, reserved for the Pakistani establishment's double speak- even reserving a special entry in the book's index that reads "Pakistan: false narratives promulgated by, pgs 33-35, 150, 172….

Rashid's words and his plain-speaking in the book are certainly unusual for a Pakistani author. But then Rashid is no ordinary author. Along with journalist Najam Sethi, he was part of the 'London Group' a group of 25 radical Pakistani students formed in 1969, some of whom joined Baloch nationalists for an armed struggle against the Pakistani army that ended in 1977.

While Sethi was arrested, Rashid went underground and eventually escaped to London. He then returned to Pakistan as the correspondent for the Daily Telegraph and the Far Eastern Economic Review for about two decades. But Rashid is no ordinary journalist either: he counts amongst his friends Afghan President Hamid Karzai (who stayed with Rashid in Lahore pre-9/11, when the Musharraf regime tried to revoke Karzai's visa in order to please the Taliban), and was one of President Obama's and Richard Holbrooke's key advisers as they tried to clean up the mess NATO and the Bush administration had made in Afghanistan. As a result, his second book 'Descent into Chaos' could be accused of glossing over Karzai and Obama's mistakes and rapid flip-flops on handling the Taliban and each other.

In 'Pakistan on the Brink', that close relationship with leaders in Kabul and Washington has clearly soured, and readers benefit from the acerbic style that spares no one the blame for the current state of affairs- with NATO retreating, a resurgent Taliban, and Pakistan wracked by the extremism it ignited in order to deal with neighbours Afghanistan, India and Iran. He also offers up some solutions, albeit impossible ones for Obama, especially in the run-up to the presidential elections: Stabilise relations with Pakistan, talk to the Taliban, push India and Pakistan closer together and initiate dialogue with Iran.

While Rashid's blunt pronouncements on both the US and Pakistan are welcome, his book lacks a comprehensive account of the big challenge facing Pakistan- that of the extremism entrenched in Punjab and Sindh by the Punjabi Taliban. Rashid chooses to follow the western understanding of 2 Talibans- the Afghan Taliban run by Mullah Omar that fight NATO and the Afghan Army, and the Pakistani Taliban or the TTP that engages the Pakistani Army. But for Pakistan watchers, Indians in particular, it is the spectre of the Lashkar e Taiba and other allies like the Lashkar-e-Jhangvi and Sipah-e-Sahiba that target India and minorities including Hindus, Christians and Shias that pose a more insidious threat in the long term.

Rashid also dismisses the current PPP government as corrupt and despised, and doesn't see it as part of the solution- but he fails to acknowledge that it is now months away from completing the first full term of a democratically elected government. Pakistan is changing in many ways: and the fact that Gilani's government has lasted despite the Army's obvious discomfort with is a significant turn that mustn't be ignored.

Perhaps the sharpest criticism for Rashid's book has come from Pakistan itself -Mohammed Taqi's review- " Descent into repackaging ", castigates him for not giving Benazir Bhutto more place in his narrative on the civilian fight back in Pakistan, Fatima Bhutto (who certainly would have no quarrel with that), says the book's " central fault is that Rashid's teleology is dedicatedly western," and the Express Tribune (" Something borrowed, Something blue ") says Rashid has "swallowed the US version of events on most things".

Indians will however see it more as a course correction of the old Pakistani narrative on Kashmir militancy, Pakistan's role in Afghanistan and the Baloch insurgency. To borrow the phraseology of some of our TV news channels, we would say: this is a Pakistani not "in denial".