Name of the Book: The Science of Interreligious Dialogue 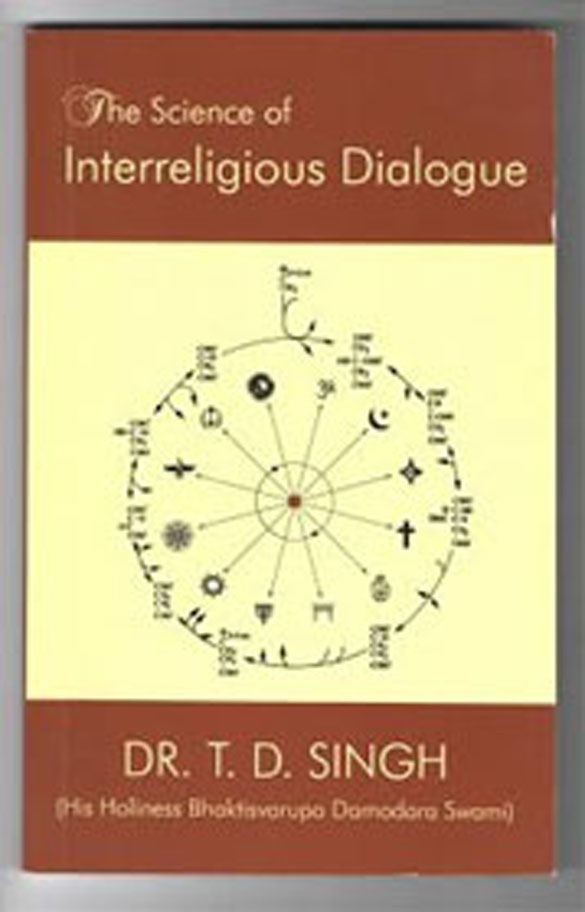 The late T.D Singh (d. 2006) was a man of many talents. He was a scientist (with a Ph.D. in Chemistry from the University of California), at the same time as he was a deeply spiritual person. For several years, he headed the Kolkata-based Bhaktivedanta Institute, which seeks to promote dialogue between religion/spirituality and science.  A passionate peace activist, he was also a prolific writer.

In this timely book, Singh makes an impassioned plea for interfaith dialogue, calling on people of different faith traditions to work together to face the many challenges that the world today confronts, including terrorism and the threat of nuclear war that could put the very survival of life on the planet at stake.

For Singh, the basis of the interfaith dialogue, peace and harmony is recognition of the One Supreme Being or God. Singh quotes Srila Prabhupada, founder of the Bhaktivedanta Institute, as describing the glorification of God as the basis of the unity of religions and the way to lasting peace and prosperity in the world:

“All the great Acharyas, like Ramanuja, Madhva, Caitanya, Sarasvati Thakura or even, in other countries, Mohammed, Christ and others, have all extensively glorified the Lord […] Because the Lord is all-pervading, it is essential to glorify Him always and everywhere […] The Lord is the master of all time and all space, and therefore the Lord’s holy name must be heard, glorified and remembered everywhere in the world. That will bring about the desired peace and prosperity so eagerly awaited by the people of the world.”

God is the supreme goal of life, and, as is stressed in various spiritual traditions, true religion is rendering loving service unto Him, Singh says. If our hearts and minds are tuned to these traditions, he writes, we can appreciate and support for one another, despite our religious and other differences. Studying the wisdom of the world’s religions can, he says, help us develop compassion for each other and discover that the message of love and mercy is common to all our faiths. “The hope for a global peace is within the grasp of those visionaries that can work to utilize this universal wisdom” he tells us.

Since there is only one God and all of us, no matter what religion or ideology we claim to follow, are His creatures, we are all brothers and sisters to each other, members of one vast family. Recognition of our common connection with God, a core teaching that unites different religions, leads to mutual respect. It is, for Singh, the basis of ‘global ethics’ for harmonious interfaith coexistence, through which people can cultivate unity while allowing for diversity.

Stressing the spiritual basis of this approach to interfaith dialogue, Singh writes that all human beings, irrespective of religion, are “eternal spiritual beings in temporary material bodies” and that “the ultimate goal of human life is to achieve love of the Supreme Lord”.  “Through spiritual education”, he says, “we should all come up to the consciousness that we are all pure spirit souls. In that consciousness, we can see the brotherhood and sisterhood of all people and that we are all spiritual children of God”. In this way, people of different faiths can begin to respect and care for each other. Far from this being a departure from religious teachings, Singh says, all genuine religious traditions teach us to love God in brotherhood. “If this was truly practised by every religious person in each tradition, he or she would never fight with anyone in the name of God”, he stresses.

Some religionists claim that the particular set of dogmas and rituals they believe in represents the sole truth. Such an attitude can easily lead to supremacism, conflict and violence. Singh, however, reminds us that true religion is “beyond any sectarian concept.” “A true religious principle”, he says, “is a gift of the Supreme Being, God, to humanity revealed through saintly persons” to help us revive our original spiritual identity.  The essence and ultimate significance of religion, Singh says, is not religion in an ethical, ritualistic or esoteric sense, but what he terms “the spiritual and universal function of life”. The natural and inherent function of a living being, he says, is to recognize that he or she is “an eternal servant of the Supreme Being”. This, Singh says, is dharma or eternal religion.

Such a universalistic understanding of religion can serve to bring people from different faith traditions closer together, leading them to realize that, in the words of Nobel Peace Laureate Archbishop Desmond Tutu, whom Singh quotes, “God’s love is too great to be confined to any one side of a conflict or to any one religion”.  It can also help us discern the essential oneness of the spirit of the different spiritual traditions that lies under the variety of their forms.

In Singh’s approach to interfaith dialogue as a spiritual quest and task, the issue of the purpose of human life is of special significance. According to the spiritual perspective, God is the foundation of reality. God, Singh says, has created humans for the purpose of spiritual evolution, for them to rise from lower to higher levels of consciousness. In contrast to this understanding of the meaning of life, Singh says, materialists claim that the purpose of life is simply to ‘enjoy’ or accumulate as much money as possible. They seek to fill the vacuum created by their denial of God and spirituality through false, materialistic ideologies, Singh says, but, he adds, “a false meaning of life will never be able to bring lasting peace in the world.”

The formula for lasting peace between people of different religious traditions must necessarily be a spiritual one, Singh indicates. It is a solution that is taught by the spiritual traditions of the world, if they are understood properly. These traditions, Singh says, teach us to discover God’s plan behind the creation and also teach us how to act in accordance with this plan. This, he says, would require us to realize the unity of all living entities as being children of God, which would help us connect with each other at a deep, spiritual level and appreciate each other despite our religious and cultural differences. It would promote what Singh calls “a culture of partnership among different religious communities”.

Singh points out that the only way for our collective survival today is to promote understanding, peace and harmony between individuals, communities and nations, and this should be based on a spiritual foundation. The root cause of challenges such inter-community conflict, terrorism and the threat of deadly wars that can put the very survival of humanity at stake, is, Singh says, lack of spirituality and knowledge of God.

This book is a real gem, a precious contribution to contemporary discussions about inter-religious relations that today have assumed immense salience, including at the global level.