Islamic Children’s Books That Delight and Inspire in Demand 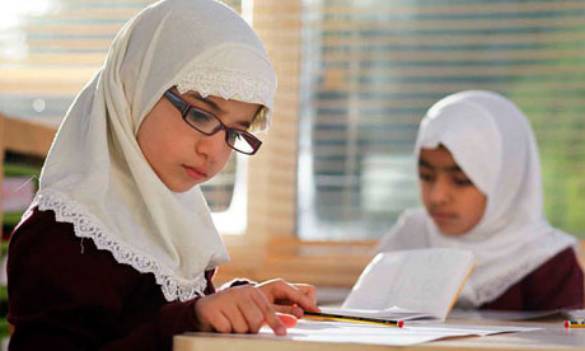 Some time ago, I complained to a friend that there were few good children’s books on Muslims or Islamic themes. I’m an American-born Muslim woman, and I was looking for books to share with my older daughter Maryam, then three. I wanted lively, upbeat bedtime books that would introduce her to our faith and identity while emphasizing universal values.

My friend, a thoughtful educator at a local Islamic school invited me to visit the school’s library. Unfortunately, that visit largely confirmed my dismal view.

The Muslim children’s books I saw there, like those I was familiar with, usually failed on all counts – the text was didactic or dry, the illustrations were unappealing and the books failed to reflect the diversity of our community. Some books retold stories of the Prophets with details of conflicts and battles that would scare the youngest readers or portray God as angry and vengeful. In others, all the women and even little girls wore headscarves, presenting portraits of Muslim life that didn’t reflect the diversity of Islam.

The books I found most appealing were mostly published in the last decade by mainstream publishers as a response to the broader, post-9/11 public desire for information about Muslims and Islam in America. The books that resonated most with me as a Muslim parent were the very same ones that were intended for a larger audience of all faiths. These books cover certain subjects, like Muslim holidays, particularly well. And, there is a growing selection featuring stories from Muslim cultures and biographies of notable men and women.

We certainly have further to go; some subjects, such as the African American Muslim experience, receive far too little coverage. I’ve also found fewer well-done books that aim to teach religious practice or core concepts of the faith, as opposed to inspiring young readers. And, compared to the volumes of books and other multi-media materials available to Christian or Jewish children on their faith, Muslims are in the beginning stages of this project. But on the whole, there is a richer library of choices to delight and inspire than I’d thought possible a year ago.

Here are my and Maryam’s favorites. Although some of these books may be classics for all ages, these recommendations are meant primarily for young children – those in the preschool and younger elementary school years.

Golden Domes and Silver Lanterns: A Muslim Book of Colors. By Hena Khan. Illustrated by Mehrdokht Amini. (Chronicle Books, 2012). The joyful rhymes and gorgeous illustrations in this newly published book jump off the page. “Orange is the color of my henna designs. They cover my hands in leafy vines.”  A visual feast, this book celebrates the beauty of Islamic arts, whether in the form of exquisite henna designs on a girl’s hands or the soaring gold minarets of a mosque. I love that the book introduces the youngest readers to elements of Muslim religious practice and cultures in the most natural and least didactic of ways.

Under the Ramadan Moon. By Sylvia Whitman. Illustrated by Sue Williams. (Albert Whitman, 2008). As a three-year-old, my daughter insisted on reading this book nightly for many weeks. She was most captivated by the lovely illustrations and musical refrains – “under the moon, under the moon, under the Ramadan moon.” I was drawn to the warmth and diversity of the families in the book: Some women wear the headscarf, others don’t, and they appear to be of different ethnicities.

In one picture, men and women pray in the same space at the mosque. (Compare that to another recent children’s book on Ramadan, which calls out the fact that “Mama and my sister pray together in a different room.”)  Most importantly, each page brims with love, whether it’s the love of families drinking tea together, swinging with their children, or giving to the poor.

The Best Eid Ever. By Asma Mobin-Uddin. Illustrated by Laura Jacobsen. (Boyd Mills Press, 2007). I discovered this gem at my local public library. It’s the story of a young Pakistani American girl who befriends and helps two refugee girls she meets at the mosque on Eid al Adha, one of the most important Islamic festivals. Most Muslim holiday books focus on the “other Eid,” which concludes Ramadan; perhaps children’s authors have avoided Eid al Adha because it commemorates Abraham’s willingness to sacrifice his son to serve God, which can be a rather difficult story for young children to hear.

Rather than address the story directly, this book conveys beautifully a core value of the holiday – sharing with those who are less fortunate. I shared this book with my daughter’s preschool class, modifying it to make it more age-appropriate, and the little ones got that core message even if the details escaped them. (It’s perhaps ideal for seven or eight-year-olds). One note: This book isn’t available on Amazon, but you can get it at Barnes and Noble online.

Night of the Moon. By Hena Khan. Illustrated by Julie Paschkis. (Chronicle Books, 2008). This story of a Pakistani American girl’s celebration of Ramadan is Maryam’s current favorite. The story follows a young girl who looks up each night into the sky to observe the changing shape of the moon, whose appearance as a new crescent marks the beginning and end of Ramadan. The vivid, jewel tone illustrations are replete with the arches and arabesques of Islamic art. I love the fact that the story ends with the young girl receiving a gift of a telescope to watch the night sky – a subtle message to our daughters that they can be scientists, too.

The Conference of the Birds. By Alexis York Lumbard. Illustrated by Demi. Foreword by Seyyed Hossein Nasr. (Wisdom Tales 2012).  This book enraptured me and Maryam alike. It’s a retelling of the 12th century Sufi epic, Farid al-Din Attar’s Conference of the Birds, and it succeeds marvelously. A tale of birds who must shed their inner flaws in a quest to meet their king, this spiritual parable has something for all ages – appealing to my four-year-old at its most basic level but full of wisdom that adults will appreciate.

The illustrations, set within gilded pages like an ancient scripture, are vibrant and exquisite, as one would only expect from renowned children’s illustrator Demi. The gorgeous birds and enchanting poetry enthralled Maryam, who happily identified toucans and cardinals among the pages, and she asked me to reread the book several times before breakfast the morning she first saw it. I cannot recommend this masterpiece enough for spiritual seekers of all faiths.

Muhammad. Written and illustrated by Demi. (McElderry Books, 2003). Demi’s children’s biography of the Prophet is a welcome addition to the existing options. The story is respectfully and faithfully told, one that Muslims will recognize as the experience of the Prophet as they know and admire him.  The illustrations, in the form of Persian miniatures, are beautifully done (with the Prophet depicted in gold silhouette to avoid the Islamic prohibition on depicting him). This book might still have been better – the storytelling might have been a little more engaging and the vocabulary simpler – but I still recommend this book for its informative and beautifully illustrated presentation.

Ayat Jamilah: Beautiful Signs. By Sarah Conover & Freda Crane. Illustrated by Valerie Wahl. (Eastern Washington University Press, 2004). This lovely anthology collects and retells religious and cultural stories from the Muslim world. Some are central to Islam, like the account of how a spider’s web and dove’s nest shielded the Prophet Muhammad during his flight from Mecca or the Quranic account of Jesus’ birth. Others are beloved tales from West Africa to China, including those of the famous folk character Mulla Nasruddin. The authors made a particular effort to include stories of girls and women and to feature tales that resonate with multicultural and multi-faith audiences. Although this book is aimed at young adults, I’ve used it to share stories with my little one. As my girls grow older, I hope to learn these stories well enough to retell on my own, in the best traditions of our oral cultures.

Extraordinary Women from the Muslim World. By Natalie Maydell & Sep Riahi. Paintings by Heba Amin. (Global Content Ventures, 2007). When a friend some time ago solicited suggestions for famous Muslim women that his eight-year-old could write about for a class biography project, I could think of only a handful that might fit the bill. This anthology featuring thirteen Muslim women throughout history will be invaluable the next time I hear a similar request. The selection is diverse, ranging from Khadija, the Prophet Muhammad’s wife, to Tjut Njak Dien, an Acehnese anti-colonial guerrilla leader, to Shirin Ebadi, the Nobel Laureate and Iranian women’s rights activist.

The stories are engagingly narrated, with vivid details that would appeal to young adult readers, and accompanied by lovely oil paintings. I appreciated the fact that the stories include helpful social context before introducing unfamiliar practices in the lives of some of the women, like polygamy. I could relate to the values these accounts emphasize – the strength and equality of women, social justice, and a respect for Islam. Although this book is aimed at young adults, I’m delighted to have this one on our shelves as Maryam grows up.

These are some of my and Maryam’s favourites, but the list is far from complete. There is a whole genre of books with characters that are South Asian, Middle Eastern, or African, introducing children to the cultures of the Muslim world, even if they do not mention Islam or Muslims specifically.  One that stands out here is Queen Rania of Jordan’s The Sandwich Swap, a sweet story about friendship across differences – in this case, hummus versus peanut butter and jelly sandwiches!

Older children who are ready for more mature themes, such as slavery or war, may appreciate the growing number of books that address the history and current events of Muslim countries.  These include Khephra Burns’ Mansa Musa: The Lion of Mali, a fictionalized biography of one of Mali’s celebrated Muslim kings, and Jeannette Winter’s Librarian of Basra, the true story of an Iraqi woman who saved books from destruction during the recent Iraq war.