Why the War on Terror May Never End

Trapped in the Forever War 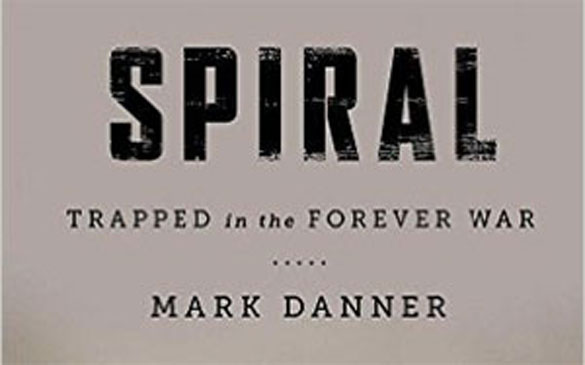 Since the Greeks, we have known of blood feuds of violence and vengeance that repeat in endless cycles, with new rounds only taking the catastrophe further out of control. And since the Greeks, escape routes have been identified and sought — Aeschylus hoped law could provide reconciliation; Jesus later claimed this power for love. But in his disturbing new book, “Spiral,” Mark Danner worries there is no way out of today’s “forever war,” which continues unabated after 15 years.

Danner spares no analogy, classical or modern, to raise awareness of this predicament. In our spiral, he says, we are both like Cadmus sowing dragon’s teeth — our victories produce new adversaries — and like the madcap inventors of a perpetual motion machine that continuously recreates the problem it was designed to solve.

A journalist who teaches at the University of California, Berkeley, Danner sounds the alarm in hectic prose, relying on a somewhat hazy concept of the war on terror as a “state of exception” normalized by our wartime presidents George W. Bush and Barack Obama.

But it is not clear how “normal” America was in the first place. Our descent into torture was certainly appalling, but the country’s commitment to fight in accordance with the most humane standards was not that old to begin with. As of Sept. 10, 2001, the country still retained considerable autonomy to go it alone when events warranted. The Cold War, though a distant memory for many by then, had also been a forever war not long before. Indeed, in some ways the damage wrought and crimes perpetrated during those four decades make our response since the turn of the millennium seems a dramatic improvement.

Danner made his name publicizing torture under Latin American dictatorships in the 1980s. It’s a crime he considers to be the “signal attribute” of our current state of exception. Obama may have banned torture, but Danner is clearly and understandably angry that the president has not advocated punishment for those who ordered the crimes and that he went on to expand the war in new directions, especially when it came to drones.

Danner closes the book with the mournful realization that human rights activism seems to have reached its limits. “What if you tear off the veil,” he plaintively asks, “and no one gasps, no one cringes, no one even blinks?” The moral pressure and legal accountability for crimes of state in Latin America is not repeating itself, Danner notes, now that our democracy has aggressively sought its own security. But perhaps this is because the forever war today is in fact distinct from those prior campaigns in which violence spiralled and the condemnation of atrocity worked tolerably well to rein in the state.

America’s war on terror is not like ancient or modern parallels. Counterinsurgencies from Rome through the Cold War years of decolonization and Vietnam involved sharp descent into barely restrained ferocity. For all its excesses, our version have involved far more protections for our enemies and safety for civilians than any fought before. According to the Senate report, the United States tortured some 40 individuals (not counting those whose interrogations were outsourced to other nations), while our quagmire in Vietnam involved endemic atrocity and millions of civilian deaths — in half as many years as the war on terror has lasted. And its end is not in sight. No one should minimize the human costs of our search for security, but perhaps its horror is not a familiar kind.

The picture is far less, then, one of “exception” and torture than a new form of humane warfare simultaneously without boundaries in time and space. In turn, it is easier for this form of war to continue indefinitely because it has been brought within law governing the conduct of hostilities to a remarkable extent. What, in other words, if torture was not the signal attribute but a dispensable mistake in the invention of the endless war of our time? What if stigmatizing atrocity, making military sprawl less offensive to many even as it transcends all known chronological and territorial limits left the conflict harder to rein in? Indicting dirty war by itself does not reach the core of our spiral — indeed; doing so may help it continue to spin.

Samuel Moyn, who teaches law and history at Harvard University, is the author of “Christian Human Rights.”