Dialogue in a Pluralistic World

Name of the Book: Dialogue in a Pluralistic World 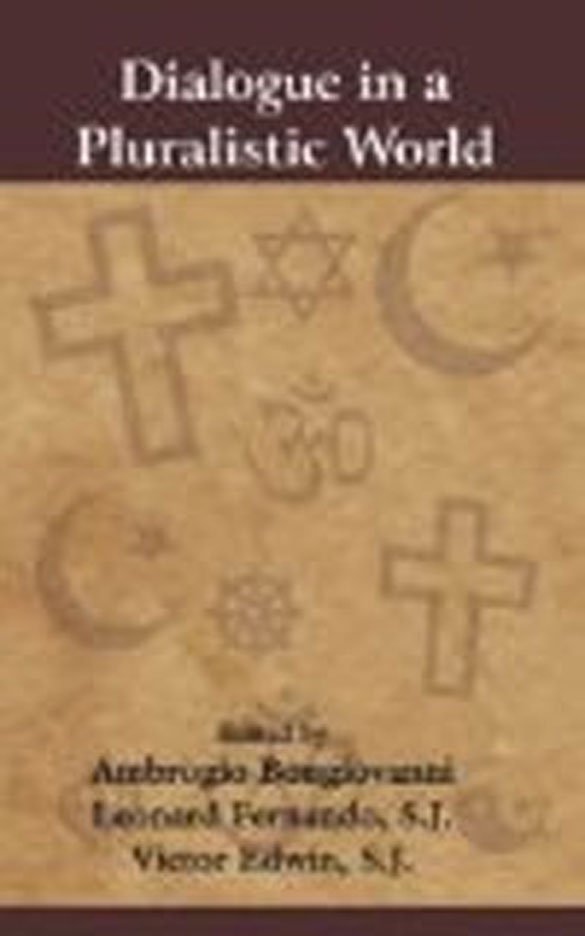 To be truly religious in our times, someone once very aptly remarked is to be inter-religious. In the past, many societies were mono-religious and did not feel the need to understand faiths other than their own. Today, however, the situation is vastly different. Large parts of the world are now religiously plural, and because of the emergence of rapid, almost instantaneous, communications across the globe, people of different faiths today interact with each other on a scale never witnessed before. This means that inter-religious dialogue has become, quite literally, a life-and-death issue for humanity and that it can no longer remain the preserve of a handful of theological ‘experts’. How societies learn to handle religious differences in our highly interlinked world has become a major challenge. If such differences are not skilfully negotiated through dialogue, the consequences can be devastatingly tragic—as is the case in certain parts of the world today, where violence in the name of religion shows no sign of abating.

This book, a collection of articles by ‘scholars’ from various faith traditions is a plea for people of diverse faiths to seek to understand each other through dialogue and to learn to live together in amity despite their religious differences.

Interfaith dialogue, stresses New Delhi-based academic Rita Bagchi, is an absolute imperative for global peace. Such dialogue is also a means for people of diverse faiths to learn and benefit from each other and enrich themselves spiritually. Bagchi underscores the point that interfaith dialogue initiatives should not limit themselves to theological exchange. They must also include joint social engagement by people of different faiths to address pressing social issues. Such collaboration needs to be based on an appreciation of the interfaith imperative in the different scriptures (which might require considerable rethinking of deeply-entrenched ways of understanding these texts). Bagchi helpfully cites the instance of numerous figures from Indian history who stressed the universality of religion beyond name and form to stress her point about the pressing need to understand our religions in an expansive way so as to embrace people of other faiths.

In his paper, Thomas Kunnunkal, an Indian Jesuit, suggests that people of different faiths study each other’s scriptures. This would expand their own spiritual experience and vision and help them to understand and appreciate the abundant goodness that is to be found in traditions other than their own. This can also help create a place for people of other faiths in our hearts. Kunnunkal pleads for us to overcome the prejudices and misconceptions that we have of other religions and communities, and to join hands with each other to work for a society where people of diverse faiths are accepted, loved and respected.

Stressing the need for dialogue between Christians and Muslims, who together constitute just over half the world’s population, New Delhi-based Islamic scholar Farida Khanum stresses that the polemical approach to interfaith relations, characterized by heated debates aiming to defeat each other and prove each other wrong, has to be given up. This approach, she rightly tells us, can in no way conduce to mutual understanding and acceptance. In contrast to the debate-oriented approach, interfaith dialogue, she explains, is based on the principle of live-and-let-live and mutual respect. Dialogue partners fully acknowledge each other’s point of view without necessarily accepting it, while, at the same time, expressing their point of view in a manner understandable to each other. In this manner, in contrast to polemics, interfaith dialogue can help nurture peace and harmonious relations between people of different faiths, who agree to disagree and yet seek to promote unity, despite their ideological differences.

Today, the danger of religious difference being made the pretext for violence that can, quite literally, engulf the whole world, is very real. Khanum rightly remarks, ‘Now we are left with no other recourse but to experiment with the culture of peace’. For this, she indicates, interfaith dialogue is an absolute must. She locates scriptural sanction for Christian-Muslim dialogue in both the Bible and the Quran, citing in particular the command to love God and to love one’s neighbour.

Thomas Michel’s essay on a Muslim scholar and advocate of peace and dialogue is a wonderful example of how someone from one religion (in this case, a Catholic priest) can study, appreciate and benefit from the insights of someone from a different faith.

Michel reflects on the life of the remarkable Turkish Islamic scholar Said Nursi (1877-1960), focusing, in particular, on Nursi’s commentary on the Quran, the Risala-e Nur. He appreciates Nursi’s appeal for unity between Muslims and pious Christians and his calling on them to work together in the face of materialism. Nursi urged to them to shun their acrimonious polemics and to provide a united witness of faith to a world suffering from aggressive atheism. Michel approvingly notes Nursi’s advocacy of personal transformation and inner purification and his insistence that the days of ‘jihad with the sword’ were over. Michel also appreciates Nursi’s balanced approach to Western civilization—neither wholly condemning it, nor uncritically embracing it. Nursi, Michel notes, stressed that the real enemies of Muslims were not one or the other community, but, rather, ignorance, poverty and disunity. His advocacy of love, forgiveness, reconciliation, introspection and self-critique, his having to suffer a long spell in jail but yet not advocating revenge and so on impel Michel to remark that Nursi must be seen as one of the greatest exponents of non-violent activism of the 20th century. In a touching tribute to the man, Michel says, ‘When I as a Christian examine the thought of Said Nursi, I am struck by how beautifully Nursi expresses and shapes my own beliefs’.

Ahmet Favat’s essay is about another Turkish Islamic scholar, Fethullah Gulen (b. 1941), on whose thinking Said Nursi exercised a seminal influence. Favat reflects on Gulen’s advocacy of interfaith dialogue, mentioning, in this regard, his meeting with important Christian leaders, such as the Pope, the Greek Orthodox Patriarch and the Sephardic Chief Rabbi of Israel, and the fact that he has inspired numerous interfaith dialogue organizations and initiatives. Gulen, Favat tells us, insists that interfaith dialogue is a must today, and that the first step in this regard is forgetting the bitterness of the past, avoiding polemics and giving precedence to the commonalities that various religions share. He suggests that four key values can be nurtured and nourished through such dialogue: love, compassion, tolerance and forgiveness.

In his essay, Paul Jackon, an Australian Jesuit priest, shows how studying a religious tradition other than one’s own can be a source of great personal enrichment. Jackson studied and translated a series of letters by the noted 14th century Sufi Shaikh Sharafuddin Maneri (who is buried in Bihar), for which he was awarded a Ph.D. In the process, Jackson developed the conviction that the Shaikh was ‘definitely a genuine Sufi’ and that he was ‘steeped in an experiential knowledge of God’: truly touching words from a priest from one religious tradition about a man from a different one. Jackson concludes his essay by telling us how he was enriched by the teachings of the Sufi Master and praying that many other people will be, too, through his translations of the Master’s letters.

German Jesuit Christian Troll’s article reflects on the need for Christian-Muslim dialogue. He approvingly quotes Pope John Paul II words addressed to a group of Muslims in 1981: “I deliberately address you as brothers we are especially brothers in God, who created us and whom we are trying to reach, in our own ways.” Recognizing that Muslims and Christians do have theological differences, he stresses that these do not have to mean absolute separation.

A wonderful illustration of interfaith dialogue in pre-modern times is provided by the Mughal Emperor’s lively interaction with Jesuit priests, the subject of Leonard Fernando’s essay. Akbar was so impressed with the first group of Jesuits who arrived at his court that he arranged for their lodgings to be transferred from the guest quarters to an apartment in the royal palace and even made one of them tutor to one of his sons. He showed a keen interest in studying about the Christian faith, and, Fernando shows, provided freedom to Christians in his empire to practice and even propagate their religion.

In 2007, a group of almost 140 noted Muslim scholars and leaders from different countries sent a joint letter, titled A Common Word Between Us and You, to top Christian leaders, calling for good relations between Muslims and Christians based on faith in the one God. Indian Jesuit Victor Edwin reflects on the response to this letter in Jesuit circles. One Jesuit helpfully noted that the letter indicated the understanding that the resolution of Christian-Muslim conflicts lay not merely in political negotiation but also in finding a common theological basis for dialogue and mutual commitment to peace and justice. While several other Jesuits welcomed the letter as indicating a growing willingness on the part of some Muslims to dialogue with Christians, Edwin notes that some also raised questions about it. For instance, one Jesuit remarked that Christians and Muslims had differences about their understandings of God and that these should not be ignored. Another suggested that Christian-Muslim relations be based on the (presumed) universal foundations of ‘natural law’ (whatever that may mean), and not on religious texts, like the Quran and the Bible.

In his article, Packiam Samuel, Protestant pastor and currently Director of the Henry Martyn Institute, an interfaith dialogue centre in Hyderabad, reflects on Christian-Muslim relations. He notes the history of much prejudice and acrimony between the two communities and stresses that polemical debates between them have yielded no positive results. He approvingly cites the Quranic verse “And do not argue with the People of the Scripture except in a way that is best […] And our God and your God is one” (29:46) and suggests that this should be the basis for relations between Christians and Muslims (and, presumably, for others, too). While pressing the need for dialogue, Samuel recognizes that certain theological differences between Christians and Muslims simply cannot be wished away. That, however, he stresses, ought not continue to bedevil relations between the two communities. In this regard, he provocatively asks, ‘Would the God whose will we discern through Christ and [the] Quran/[the] Prophet rather hear us debating endlessly about Unity and Trinity or see us liberate the oppressed, seeking the welfare of the poor and meeting our neighbour’s needs?’ Samuel also rightly stresses that while Christians and Muslims should accept that their theological formulations do not lack ‘truthfulness’, they do not exhaust ‘the mystery of God’.

Two essays in this volume deal with cases of inter-community relations in specific socio-historical contexts. Ambrogio Bongiovanni’s paper focuses on issues related to relations between Italy’s Muslims (who, forming around 2.5% of the country’s population, are mostly immigrants or locally born but of foreign descent) and other Italians. Desiderio Pinto’s essay covers a wide historical canvas, focusing particularly on noted Indian Muslim figures who promoted interaction with, and understanding of, people of other faiths. These include early Arab and Persian scholars who translated Buddhist and Hindu texts into Arabic and Persian, and several Sufis who unhesitatingly adopted certain ‘Buddhist’ and ’Hindu’ practices, not seeing this as in any way contradicting Islam.

Given that in our closely networked world people of different religious and cultural backgrounds have no choice but to live in closer interdependence than ever before, interfaith or inter-community dialogue for peace has become an absolute necessity. This is what this delightful book makes amply clear. It is a message that we simply cannot afford to ignore.