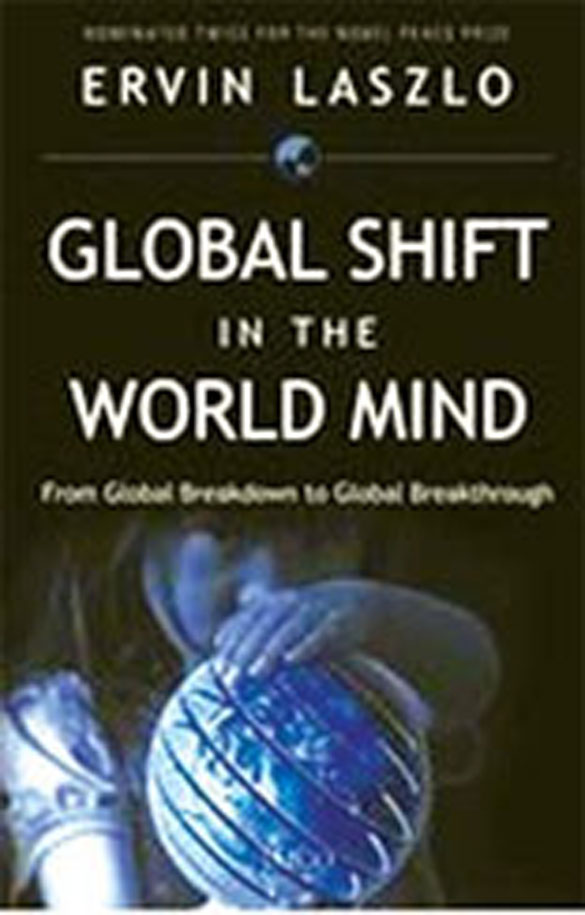 In this timely book, Ervin Laszlo (twice Nobel Peace Prize nominee and author of more than 80 books) calls for a fundamental shift in the ‘world mind’—in the way we view relations with each other and with the rest of the cosmos and in our views about the nature of reality. This is essential, he says, if we are to prevent a ‘global breakdown’ and make a ‘global breakthrough’. Today, he urgently reminds us, we face instability of global proportions because of the dominant ‘world mind’, in which others are seen, typically, in adversarial terms and nature is considered an object to be possessed or even conquered.

Signs of the disaster of global proportions that human hands have wrought are available all around us, he says—in the form of climate change, ecological devastation and pollution, endemic poverty, pervasive insecurity and frustration, alarming water shortages, enormous military spending (globally, more than one trillion dollars every year, Laszlo says) wars, terrorism and various other forms of violence, fundamentalism in the name of religion, and so on. The current dominant form of civilization, Laszlo says, seems to have reached the end of its limits and has to change if human beings are to continue to survive.

“We live in a crucial epoch—an epoch of instability and change”, Laszlo tells us. “The future is open. We could go down in chaos and catastrophe, or pull ourselves up by our bootstraps to a peaceful and sustainable world. The choice between extinction and evolution is real.” This situation places humanity, he says, with a unique opportunity—we either carry on as before (which could, Laszlo believes, mean the extinction of the human species) or else, infused with a new, higher consciousness, graduate to a new ‘world mind’, based on harmony among humans and between humans and other species and with the natural environment.

Although signs of global crisis abound, Laszlo says the situation isn’t beyond repair. He sees hope in the revival of a spirituality that reminds us of our links to each other and to all of creation and that can inspire the solidarity indispensable for humans to continue living on this planet.  The change that Laszlo speaks of has to start at the level of the individual. It is based on a changed consciousness, reflected in a transformed understanding of ourselves, of others and of the world around us. It entails ceasing to think of ourselves as individuals pursuing our own personal interests and at best linked to others temporarily and because of coinciding interests. It requires us to drop being driven by the economic motive and the quest to derive the maximum out of other people and of nature. It necessitates ceasing to look at technology as the answer to every challenge and measuring happiness by material wealth.

It requires giving up many of the underlying assumptions of the deeply-flawed currently-dominant ‘world mind’, including indifference to how our actions today impact on future generations, the notion that new is always better, that nature is inexhaustible, that life is a struggle, where only the fittest deserve to survive, that the market is necessarily the best mechanism to distribute benefits, that the more we consume, the ‘better’ we are, that economic ends justify military means, and so on.

This inner growth that leads to expansion of consciousness from “me” to “we”, as it is sometimes put, can be encouraged through deep religious and spiritual experience, thus pointing to the necessity of a spiritual basis for the new ‘world mind’. “People who engage in intense meditation or prayer,” Laszlo writes, “know that differences among people, whether due to sex, race, colour, language, political conviction, or religious belief, do not mean that they are separate from each other. They recognize that […] we are all like islands in the sea, separate on the surface but connected in the deep. There are levels of existence through which we not only communicate with each other—we become each other.” This spiritual consciousness that is indispensable for the survival of the human species today, Laszlo says, is key to making us more aware of our thoughts, emotions and inner being, more concerned about others and the quality of our relationships (including with the environment), and better equipped to seek personal fulfilment in harmony with the integrity of nature and with consideration for similar pursuits of others—all ingredients of the new ‘world mind’ that Laszlo speaks of.

The ‘world mind’ that Laszlo calls for is based on what he calls a ‘planetary ethic’. “In a globally interacting and interdependent world,” he writes, “the dominant ethic cannot be local, regional, or ethnic. It cannot be only a Christian ethic, or Jewish Muslim, or Hindu ethic—it must bring together all the ethics that guide people’s behaviour.” This planetary ethic, Laszlo says, must be reflected in awareness of human responsibilities (in addition to rights) and applies not just at the level of individuals, but also infuses relations between countries (international ethics) and our relations with the rest of the cosmos (ecological ethics).

The change that Laszlo speaks of could happen, he says, through efforts of individuals and small groups. These could grow into popular movements for peace, international cooperation and inter-cultural solidarity. The ‘world mind’ that Laszlo appeals for (and which he believes is indispensable for the survival of human beings on earth) would have the pursuit of profit by corporate to be informed by social and ecological responsibility and would be reflected in and promoted by what he calls an ‘electronic E-Parliament’ that links parliamentarians worldwide, providing them a form for discussions on the best ways to serve the common good.

It would manifest in NGOs linking up globally through the Internet, developing shared strategies to promote peace, revitalize war-torn regions, and encourage socially- and ecologically-responsible government and business policies. In place of whopping military budgets, governments would invest in practical attempts at conflict resolution.

Laszlo draws our attention to a small, yet significant, number of people who are, in various ways, manifesting ‘planetary ethics’ in their lives, offering them as beacons of hope in what might otherwise be seen as a grim situation.

All isn’t lost, then, it would seem, as this absorbing book, well worth reading, tells us even as it earnestly appeals to us to mend our ways.