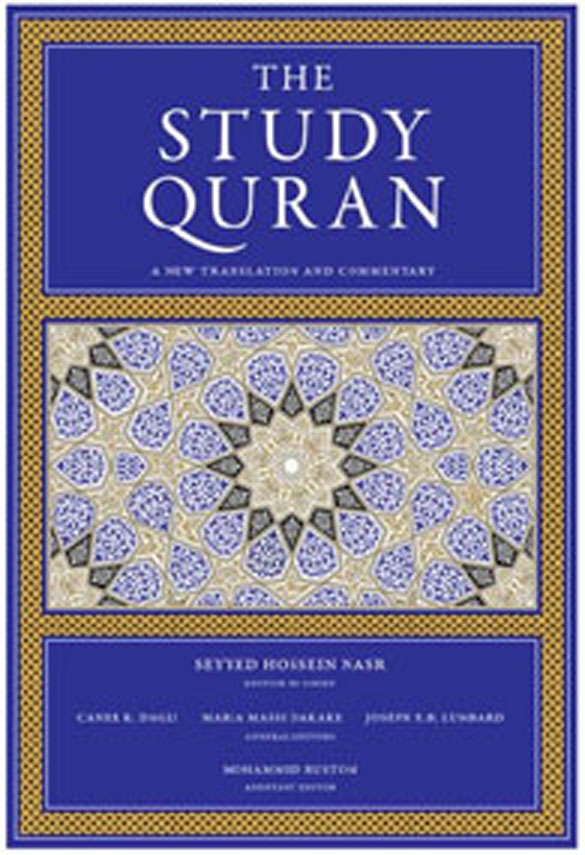 This English translation of, and commentary on, the Quran is the product of the efforts of a team of noted Muslim scholars, headed by the well-known, widely-respected and highly prolific Seyyed Hossein Nasr (professor at George Washington University, USA, and author of such books as “Ideals and Realities of Islam”, “The Encounter of Man and Nature: The Spiritual Crisis of Modern Man”,  “Islamic Science: An Illustrated Study”, “Islam in the Modern World”, “The Garden of Truth: The Vision and Promise of Sufism, Islam's Mystical Tradition”, and “The Need for a Sacred Science”, among many others). The team has done a remarkable job of bringing out a scholarly, and at the same time, easily understandable translation of the Quran in contemporary English. The members of the team have consulted other well-known English translations of the Quran, but their rendition is based on the Arabic text itself. Introducing the text, Nasr explains that the fact that this is a collaborative effort by several scholars has helped the team “eschew the personal predilections that can often influence the translation process.”

The translation is accompanied by a verse-by-verse commentary, which readers may find very useful in getting a deeper understanding of the scripture. The commentary benefits from previous Quranic commentaries (Tafsirs), Hadith literature and writings on the life of the Prophet Muhammad. It contains numerous citations from earlier traditional tafsir works, which provide references for those who wish to pursue these citations further. The commentary, Nasr says, “is meant to take the readers beyond the literal meaning of the text when necessary”, to “clarify difficult passages”, to explain “the inner meanings of verses when called for” and to provide “a reasonable account of the diversity of views and interpretations in matters of law, theology, spirituality, and sacred history put forth by various traditional Islamic authorities.”

The volume includes essays by fifteen scholars on different aspects of the Quran, which can assist the reader in better understanding of the scripture. They include such themes as the Quran and art, the Quranic view of sacred history and other religions, the Quran and schools of Islamic theology and philosophy, the Quran and Sufism, Quranic commentaries, Quranic ethics, human rights and society, war and peace in the Quran, the Islamic view of the Quran, and death and the afterlife in the Quran. The authors of these essays represent different schools of Islamic thought and law and this reflects Nasr’s aim of being, as he puts it, “as global and universal as possible within the framework of traditional Islamic scholarship.” They are from diverse parts of the world, including Muslim-majority regions and the West, and include the grand Shaykh of one of the most notable centres of Sunni learning, Cairo’s Al-Azhar University, a leading Shia ayatollah of Iran and Muslim professors at Western universities.

The easily-understandable language of the translation plus the detailed commentary makes this book a very useful guide in understanding the Quran in greater depth. At almost 2000 pages, the book isn’t exactly easy to carry and hold though—dividing it into two volumes might have made it easier for the reader. The quality of the paper is also an issue—some readers might find the paper a bit too thin. But these should not detract from the overall usefulness of this remarkable scholarly effort.