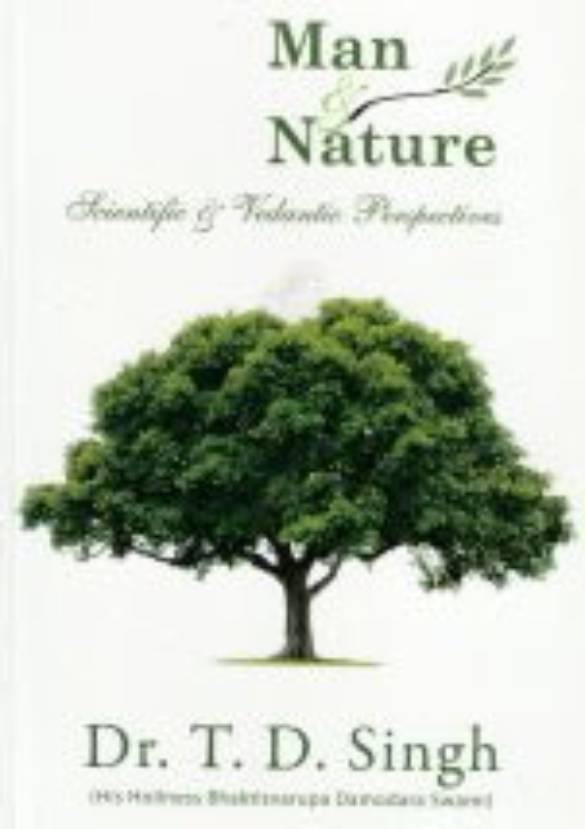 The relationship between science and religion is something about which much has been written, by ‘experts’ and ‘lay’ people alike. This book on the subject has the particular advantage of having been authored by a man who was both a scientist and a spiritual seeker. The late TP Singh (1937-2006), also known as Bhaktisvarupa Damodara Swami, received his Ph.D. in Organic Chemistry from the University of California and served as Director of the Bhaktivedanta Institute in Kolkata, a centre for promoting studies about the relationship between science and Vedanta. A prolific writer, Singh, who was also active in the field of interfaith dialogue, was widely known for his efforts to promote the interface between science and religion for a deeper understanding of life and the universe.

Singh notes that human beings have always been interested in nature. He cites a range of different definitions of nature over the centuries, showing that the traditional view of nature was dominated by the understanding that nature is a product of God and that one should respect it. Here’s a sample of the quotes Singh provides in this regard:

“Nature and revelation are like God’s books; each are plain practical lessons for every-day duty” (American theologian Tyron Edwards)

“Nature is the living, visible garment of God” (German poet and philosopher Goethe)

But with the advent of the ‘Scientific Revolution’ in the West from the 16th century onwards, Singh explains, the conception of nature changed significantly for many. As a result, science (especially in the West) practically replaced religion as the preeminent intellectual authority to understand nature. Human reason and empirical observation assumed the place of theological doctrine as the principal means for comprehending nature. This had major consequences for how human beings related to nature.

The ‘scientific materialism’ that now dictated how many people came to view nature contended that the scientific process was the only reliable means for knowing things and also that physical matter was the fundamental reality of nature. It claimed that science could provide man mastery over nature, which would bring him immense benefits. This represented a major change in the understanding of knowledge—knowledge as power.

Science, Singh admits, has done great service in various fields. But there’s also a very negative side to its story, he shows: the misuse of science and technological products that is overlooked by ‘the overenthusiastic scientific mind’, including in the form of nuclear weapons, ecological imbalance, environmental pollution, uncontrolled deforestation and what Singh rightly calls ‘unguided scientific madness’—so much so that, Singh says, man’s very existence on Earth is in danger now.

However, the crisis that scientific materialism has generated has led to a welcome rethinking in scientific circles about the very nature of science itself. Singh writes that major postulates of earlier scientific conceptions have been questioned. Today, he says, science has become increasingly self-aware and self-critical and more conscious of its limitations. New perspectives urge rethinking about man’s relation to nature, driven by a growing recognition that modern science’s mechanistic concept of nature was not only limited but also fundamentally flawed. There is now increasing interest in studying mind and consciousness as fundamental elements of nature. New developments in the scientific community, Singh says, have been strengthened and often stimulated by the re-emergence of interest in various mystical and spiritual conceptions of nature.

In a chapter titled “Return to Ancient Thought”, Singh refers to growing recognition in intellectual circles of the need to add to the modern epistemological equation other factors such as will, faith, morality, hope, intuition, forgiveness and other non-mechanistic elements of nature, elements which have to be derived from spiritual experiences. Science is waking up to the reality of and the need for spirituality.

Today, Singh says, conflict between religion and science is increasingly narrowing down. One reflection of this are the  several institutions across the globe that seek to promote interface between science and religion. It is increasingly being felt that science alone is unable to understand nature, and hence the need to include religious or spiritual principles. This reflects nothing less than a paradigm shift.

Singh here highlights the significance of what he refers to as the “Vedantic Paradigm”, in which knowledge has two elements. The first of these is Para Vidya (higher knowledge). The other is Apara Vidya (lower or ordinary knowledge)—in other words, spiritual and material knowledge respectively. God is the source of these two forms of knowledge and man should acquire both. This paradigm can be of considerable benefit in the study of nature. It recognizes that nature has two aspects: material (composed of non-conscious entities or matter), and spiritual (composed of conscious entities or living beings). In this paradigm, God or the Supreme Being is the Cause of all causes. Nature is one of God’s energies and is working under God’s direction. Bringing in the God-dimension makes the study of nature through this paradigm distinct from dominant Western paradigms that are silent on the spiritual aspects of reality.

This little book is big on information and insights, pointing to what Singh asserts are the need for science and religion or spirituality to join hands in the study of nature. Much of what Singh says may easily resonate with people from diverse spiritual and religious backgrounds, who may find his insights useful in their reflections on the relationship between faith and science.