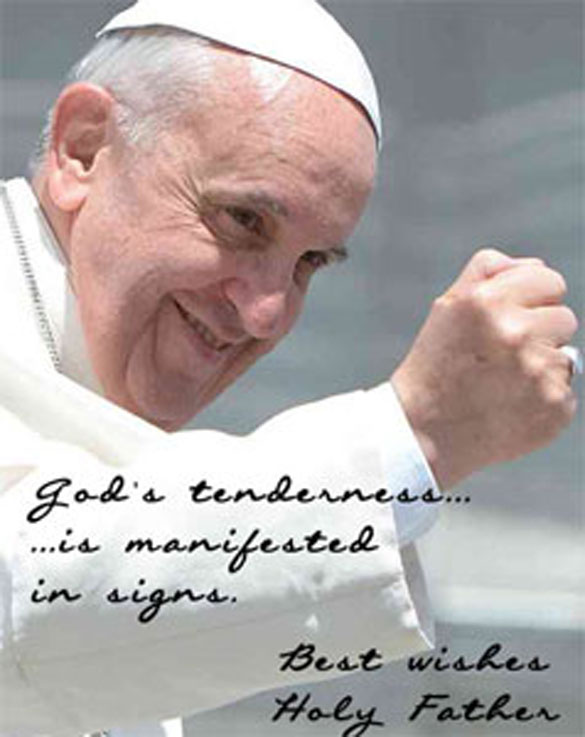 Ecological devastation is today a truly global issue, one that affects every living being on this planet, our common home. Uncontrolled pillage of the earth’s treasures is provoking havoc, Pope Francis, head of the Catholic Church, reminds us in this ‘encyclical letter’ (letter sent out by the Pope concerning Catholic doctrine), recently published as a book, as he urges us to transform our lifestyles in a more ecologically-caring direction.

Laudato Si’ mi’ Signore (which translates as ‘Praise be to you, my Lord’) is, Pope Francis writes, a ‘canticle’ or song by the celebrated Christian saint Francis of Assisi (1182-1226) that “reminds us that our common home is like a sister with whom we share our life and a beautiful mother who opens her arms to receive us.” This ‘sister’—the earth—Pope Francis writes, “now cries out to us because of the harm we have inflicted on her by our irresponsible use and abuse of the goods with which God has endowed her. We have come to see ourselves as her lords and masters, entitled to plunder her at will. The violence present in our hearts wounded by sin is also reflected in symptoms of sickness evident in the soil, in the water, in the air, and in all forms of life.” This is why, he says, “the earth herself, burdened and laid waste, is among the most abandoned and maltreated of our poor”. “We have forgotten”, he tells us, “that we ourselves are dust of the earth” and that “our very bodies are made up of her elements, we breathe her air and we receive life and refreshment from her waters.”

Pope Francis provides a succinct analysis of the roots of the global ecological crisis, locating its roots in a worldview that regards the purpose of life in purely materialistic terms. This is reflected in economic systems that are driven by the desire for economic gain with little or no concern for the social and ecological implications of production and consumption choices.  In this regard, Pope Francis tells us that when we forget that this world is not ours, but, instead, belongs to God, we play havoc with it. And that lies behind the contemporary global ecological devastation. “Once we lose our humility, and become enthralled with the possibility of limitless mastery over everything, we inevitably end up harming society and the environment,” he says. It is not easy to promote this kind of humility, he explains, “when we exclude God from our lives”, or when we replace God with our own ego. He quotes his predecessor Pope Benedict XVI as saying that creation is harmed when humans begin to think that “we ourselves have the final world”, consider everything as “simply our property” and “use it for ourselves alone”.

A worldview that has no room for God, being purely materialistic, is thus a sure recipe for mindless hedonism that leads to environmental disaster because each thing produced and consumed is a depletion of the earth’s treasures. Obsession with a lifestyle based on consumerism can only lead to violence and mutual destruction, Pope Francis stresses. “In the end, a world of exacerbated consumption is at the same time a world which mistreats life in all its forms,” he says, calling on us to recognize that endless consumption and accumulation of material things will not give us the happiness that we seek.

The challenge that the earth is faced with requires nothing less than a change in our worldview and understanding of the purpose of life on earth, which, in turn, must be reflected in changes in production and consumption practices. As Pope Francis very rightly indicates, the issue is, at root, a spiritual one. We need to remind ourselves that we are not the owners of this earth; that the earth belongs to God; that human beings have been appointed, not to do what they please with God’s earth and the things and beings that it contains, but to administer them as God wishes us to; that there are beings other than man who share this common home and whose needs and rights have to be respected; and that human beings, other life forms as well as nature are all deeply interconnected and that, therefore, human beings need to care for other created things, sentient as well as others. Being aware of all of this is a must for an adequate response to the ecological mess that we have created. “Living our vocation to be protectors of God’s handiwork is essential to a life of virtue,” Pope Francis explains.

While Pope Francis stresses the need for changes in terms of laws and policies at the level of governments in order to respond to the ecological crisis, the crisis, he tells us, cannot be adequately met without each one of us doing what we as individuals need to in this regard. Environmental degradation challenges us to examine our own lifestyles, he says. He writes that there is a “great need for a sense of social responsibility on the part of consumers”, reminding us, in the words of Pope Benedict XVI, that “purchasing is always a moral—and not simply economic—act”. He highlights a spirituality that “proposes a growth marked by moderation and the capacity to be happy with little.” Even living with little, he reminds us, one can “live on a lot” when we cultivate other pleasures and find satisfaction in serving others, developing our gifts, communing with nature and being in prayer.

Besides being more ecologically-conscious in our consumption choices, we as individuals can make other changes, reflected in what Pope Francis calls “little daily actions”, so as to make less demands on the environment. He suggests, for instance, avoiding the use of plastic, separating refuse, cooking only what can reasonably be consumed, using public transport, car-pooling, switching off unnecessary lights, and so on. “We must not think that these efforts are not going to change the world,” he says. “They benefit society, often unbeknown to us, for they call forth a goodness which, albeit unseen, inevitably tends to spread.” Further, he tells us, “such actions can restore our sense of self-esteem; they can enable us to live more fully and to feel that life on earth is worthwhile.”

This book provides both a brilliant analysis of the roots of the global environmental devastation that we are today faced with and a brilliant response to it. Addressed to all people, and not just to Catholics alone, in a spirit of dialogue, it is a truly universal message about a truly universal issue from someone who has come to be seen the world over as a truly remarkable person.