How the World's Most Notorious Atheist Changed His Mind

There is A God: 'How the World's Most Notorious Atheist Changed His Mind' 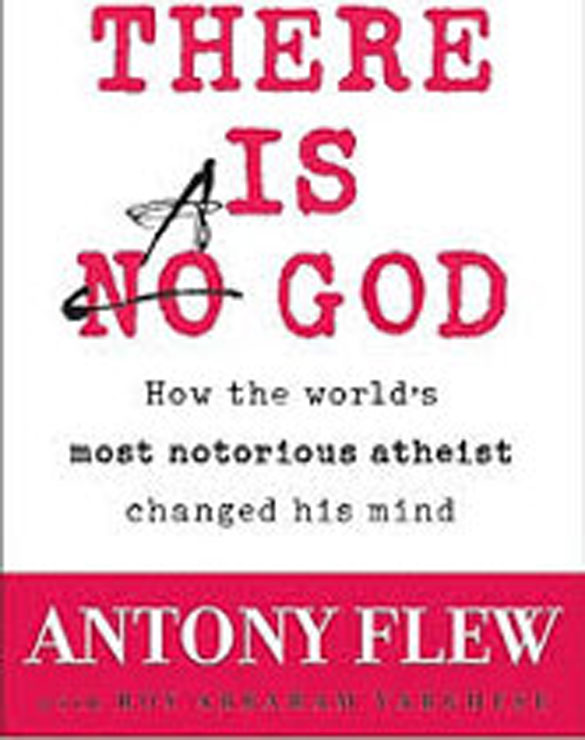 One isn’t sure if he was truly at one time the “World’s Most Notorious Atheist”, as the title of this book describes him, or if this epithet is simply a clever sales gimmick, but the late Professor Antony Flew (d. 2010) was definitely one of the most prolific and influential atheist philosophers of modern times. His numerous books helped set the philosophical agenda for atheism for half a century or so, until when, around the age of 80, just a few years before his death, he declared that he was wrong all along about God. No one expected this from one of the world’s leading champions of atheism, not least Flew himself. “[I]t may well be that no one is as surprised as I am that my exploration of the Divine has after all these years turned from denial to discovery,” he exclaimed.

Written by a professional philosopher, it is perhaps to be expected that this book seems, in parts, dense and abstruse. But this account of Flew’s journey, from hardened atheism to belief in God, is truly amazing. It was, as he puts it, a “pilgrimage of reason”, leading him from denial of God to the acceptance of the existence of what he termed as a “self-existent, immutable, immaterial, omnipotent, and omniscient Being.”

Flew tells us that he wasn’t always an atheist until his dramatic turn-around in his old age. In fact, he began life quite religiously, being the son of an English Christian preacher. He studied in a Christian school, where he attended chapel, but prayers, he felt, were more or less a “weary duty”. “Never did I feel the slightest desire to commune with God”, he says. Gradually, he turned into a convinced atheist, one reason for this being his struggle to make sense of the problem of evil in the world and its relation with a loving, all powerful God. Already at school he had begun arguing with his classmates that “the idea of a God who is both omnipotent and perfectly good is incompatible with the manifest evils and imperfections of the world.” By the age of 15, he had rejected the thesis that the universe was created by an all-good, all-powerful God.

Flew went on to study philosophy at the University of Oxford, and then taught for many years at various universities in the US, Canada, and the UK. In his career as a professional philosopher, spanning many decades, he penned numerous treatises, which earned him the dubious distinction of being one of the leading and most articulate advocates of atheism in modern times.

After more than six decades of ardently propagating atheism, Flew tells us—and this is surely the most fascinating part of the book—he experienced a complete reversal of his stance. In 2004 he announced that he now believed in God (although not in any particular religion). This transformation was not, he clarifies, because of any personal religious experience, but, rather, because he had followed where the evidence had led him. He was compelled to recognise, he says, that recent scientific work on the origin of life pointed to the activity of a creative Intelligence, or God. Given the enormous complexity of the universe, the existence of a Creator can hardly be denied. It is impossible, Flew writes, that all of this came about through chance, as atheists insist. “I now believe that the universe was brought into existence by an infinite Intelligence. I believe that this universe’s intricate laws manifest what scientists have called the Mind of God. I believe that life and reproduction originate in a divine Source,” he says, turning his back on years of determined denial of God.

Accepting the existence of God now made perfectly good sense to Flew. “[T]he leaders of science over the last hundred years, along with some of today’s most influential scientists,” he writes, “have built a philosophically compelling vision of a rational universe that sprang from a divine Mind.” Interestingly—and this people who unthinkingly imagine that science has ‘disproved’ God should note—Flew stresses that he had followed scientific evidence, or the findings of modern science, to come to the conclusion about the existence of God. It was, he writes, “a consequence of my continuing assessment of the evidence of nature”, following the evidence wherever it leads—in this case to belief in God.  He had not come to this conclusion out of belief. “[M]y discovery of the Divine has proceeded on a purely natural level, without any reference to supernatural phenomena,” he says. His discovery of the existence of God, he points out, “has been a pilgrimage of reason and not of faith.”

“Science spotlights three dimensions of nature that point to God”, Flew explains. “The first is that nature obeys laws. The second is the dimension of life, of intelligently organized and purpose-driven beings, which arose from matter. The third is the very existence of nature.”

The laws of nature, so intricate in design and so mathematically precise, Flew writes, clearly indicate the existence of a cosmic Designer. These laws are fine-tuned in such a way that life and consciousness can emerge. Hence, they cannot be taken as simply as ‘given’ and as having no Maker, unlike what atheists argue. Rather, Flew stresses, they suggest purpose and design and indicate a Divine Lawmaker. If one accepts the fact that there are laws that govern the universe, he says, then something must impose that regularity on the universe, and the theistic option is the only serious one. Rationally, Flew goes on, one can only conclude that it is God who creates these laws of nature and imposes them on the universe. The fact that if the value of even one of the most fundamental constants in physics—say, the speed of light or the mass of an electron—had been even to the slightest degree different no planet capable of permitting the evolution of human life would have formed is further evidence of the existence of a Divine Designer. The laws of nature, and the very fact of life and the existence of the universe can only be explained, Flew maintains, in the light of a Divine Intelligence or God.

Many scientists, past and present, Flew tells us, have come to the same conclusion from reflecting on the astounding design clearly evident in nature. They have recognized God as the cause of the amazing order in the cosmos, the governance of the universe by rational laws. To back this position, Flew quotes Einstein, supposedly one of the greatest scientists of modern times, as declaring:

Everyone who is seriously engaged in the pursuit of science becomes convinced that the laws of nature manifest the existence of a spirit vastly superior to that of men, and one in the face of which we with our modest powers must feel humble.

Flew mentions several other modern scientists who, likewise, see a connection between the laws of nature and God. He cites, for instance, Erwin Shrodinger, who developed wave mechanics, as writing:

The scientific picture of the world around me is very deficient. It gives me a lot of factual information, puts all our experiences in a magnificently consistent order, but is ghastly silent about all that is really near to our heart, that really matters to us […] It knows nothing of beauty and ugly, good or bad, God and eternity. Science sometimes pretends to answer questions in these domains, but the answers are very often so silly that we are not inclined to take them seriously. Science is reticent too when it is a question of the great Unity of which somehow form a part, to which we belong. The most popular name for it in our time is God, with a capital ‘G’.”

Religion and natural science are fighting a joint battle in an incessant, never relaxing crusade against scepticism and against dogmatism, against unbelief and superstition…[and therefore] ‘On to God!’

The numerous modern scientists whom Flew quotes propound, he says, “a vision of reality that emerges from the conceptual heart of modern science and imposes itself on the rational mind.” “It is a vision,” Flew says, “that I personally find compelling and irrefutable.”

Following his ‘conversion’, Flew was able to critically reflect on the basic premises of atheism that he had advocated so passionately for decades. Theodicy—the issue of why a good God permits the existence of evil—was one of the reasons that set him off religion as a young man and turned him into a hardened atheist. Now, he says, he has reconsidered his views on free will and its relationship to evil, admitting that he had not earlier properly considered the various theological responses to this issue.

Another question that Flew found himself compelled to revise his opinions on is the emergence of life.  Atheists, he says, insist that we should not ask for an explanation of how life emerged. It must, they say, simply be accepted, as a given. Since atheists do not want to accept a transcendent source of life, they choose to believe what Flew now recognizes as the impossible—that life arose spontaneously, by chance, from matter or that the laws of physics are ‘lawless laws’ that arise from the void. Atheists simply have no meaningful account for the origin of life, Flew says, and their argument that living organisms consists simply of matter does not address the existence of consciousness.

Modern scientific findings are making the gaping holes in atheist logic even more apparent, Flew tells us. Atheists have to be embarrassed, he says, by cosmologists who are providing scientific proof for the religious belief that the universe had a definite beginning. Earlier, many atheists insisted that the universe was beginning-less, and, therefore, that it did not have a Creator. They used this argument to deny the existence of God. But the Big Bang Theory has challenged that claim. If the ‘Big Bang’, as many scientists say, actually happened, it means that the universe did have a beginning and that God created it.

While Flew was led to recognize the existence of God, it seems that he did not accept any particular religion himself. It would have been adequate, then, if the book had limited itself simply to Flew’s transformation from disbelief to faith. Sadly, though, it exceeds its brief—some remarks by Flew that tend to privilege one religion over others, and a long, winding discussion in the form of an appendix with an Anglican Bishop defending certain specifically Christian doctrines seem quite out of place against the backdrop of Flew’s insistence that his discovery of God had entirely to do with, as he puts it, “the evidence of nature”, and not with theological belief as such. The book could well have avoided all of this, for it clearly does not gel with an essential aspect of Flew’s account of his amazing journey.

That, however, should not detract from the merit of this fascinating book and its ready appeal to people of all faiths and none.