Critical Issues in the Philosophy of Science and Religion

Name of the Book: Critical Issues in the Philosophy of Science and Religion 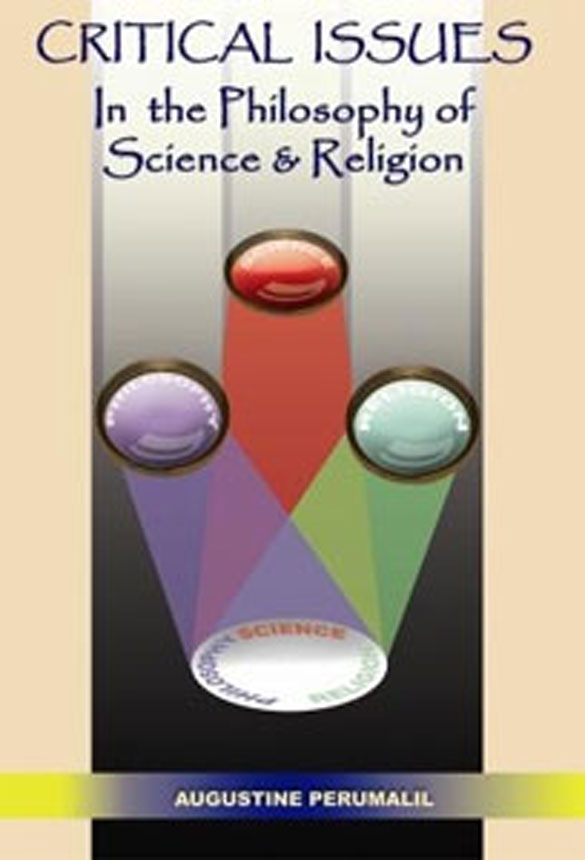 ‘Religion is absolutely unscientific!’, ‘Scientists have proven that religion is utter rubbish!’, ‘How can you believe in God in this scientific day and age!’, ‘Religion and Science just can’t go together!’…

How many times have we heard claims and comments like these! The notion that science has finally ‘disproved’ God is astoundingly widespread, including (and perhaps especially) among many who know little about either science or religion.

The fact, however, is that science has definitely not, and certainly cannot, disprove God. Little do proponents of the thesis that science has shown God to be a myth know that scores of leading scientists across the world, overwhelmed by the remarkable intricacy and complexity of the cosmos, have had to conclude that the universe must definitely have a creator, and that without God life would not have been possible and the cosmos itself would have been inconceivable. Contrary to popular lore, then, modern science has not proved God to be a character straight out from a fairy tale.

Ongoing debates about the relationship between science and religion have necessitated a major rethinking in both religious and scientific circles, the author of this book, an Indian Catholic priest, suggests. These debates have contributed to undermining the ideology of ‘scientism’, which claims that empirical science is the only paradigm or source of valid knowledge. This has contributed to a growing questioning in recent years of the ‘logical positivist’ conception of science, which reigned almost unchallenged in scientific circles till recently.

Logical positivism is based on the notion that only those propositions that can be verified through sense experience and experimentation can be accepted as valid knowledge. Since religious or spiritual claims about what is beyond sensory experience cannot be subjected to such empirical verification, logical positivists dismiss them as meaningless or even as absurd ‘mumbo-jumbo’. The challenge that logical positivism today faces, from not just theologians but also from many scientists themselves, Perumalil indicates, augurs well for efforts to enable science and religion to be in harmony and to enrich each other.

Perumalil alerts us to a growing number of scientists who are today calling for a critical appraisal of the philosophy of science. They argue that just because the empirical methods that scientists employ cannot be used to study supersensory aspects of reality, it does not mean that the supernatural realm is a fiction. There is now growing recognition among scientists that there may indeed be vast realms of reality that are beyond the reach of scientific investigation. This can help lead scientists (and others, too) to respect the rightful place of religion, faith, mysticism, spirituality and intuition in relating to aspects of reality that the empirical methods of science are not qualified to deal with. Recognizing the need for different methods to relate to different aspects of reality can open the way for healthy interaction between science and religion and for a more profound comprehension of the complex reality of the universe that cannot be grasped by one method alone.

The harmony between religion and science that Perumalil aspires to requires a redefinition of what is meant by science.  Scientists who do not take God seriously define science in such a way that it has no room for God or religion at all. By insisting that science must be based on empirical observation and experimentation alone and by demanding that only those claims that can be proved by the senses can be considered ‘scientific’ they automatically rule out any space for religion, because the truth-claims that religion makes cannot be verified through these methods of investigation. This definition of scientifically-valid knowledge that scientists who uphold a purely materialistic conception of the universe insist on leaves religious truth-claims completely out of its domain, thus causing it to be branded as ‘unscientific’ or even as complete nonsense. The paradigm that materialist or atheist scientists have constructed to define what is scientifically-valid knowledge (and what is not) is designed in such a way as to rigidly exclude all non-empirically verifiable truth-claims, such as those that religion makes. A synergy between religion and science, Perumalil suggests, thus necessitates a rethinking of this definition of what constitutes ‘valid’ knowledge.

The rapprochement that Perumalil seeks to bring about between science and religion can be facilitated by recognizing a crucial difference between the two. While science attends to the physical reality outside ourselves, religion focuses particularly (though not exclusively) on the inner reality, the self, and God. Scientific knowledge is based on sensory perception, while religion focuses especially on inner realization, which is not amenable to empirical experiment or measurement. Science aims to increase our knowledge of nature and to enable us to harness nature for our benefit. Accordingly, its aim is cognitive and its method empirical. On the other hand, religion is largely a matter of personal faith and devotional practices based on certain beliefs about ourselves and supernatural realities, including doctrines about the sacred, man’s existential situation, bondage and liberation. It aims to define human life and guide it to its completion. Their methods and large parts of their domains thus being different, science and religion need not necessarily conflict with each other.

Scientists, Perumalil suggests, must recognize that just because something is not verifiable by the senses it does not mean it is false. In other words, there need not be any contradiction between science and religion, if both of these are understood properly. As Perumalil puts it, ‘They are mutually complementary, as both are closely related to human life, having the aim of promoting human interests. There is no doubt that those forms of religion which emphasize rituals, dogmas and blind faith are not the essentials of religion. Hence, the conflict between science and some forms of religion is not to be taken as a conflict between science and religion as such.’

Many materialist scientists dismiss religion as ‘unscientific’, claiming that it is ‘subjective’, and that, therefore, it violates ‘objectivity’, which is regarded as a basic canon of science. In this regard, Perumalil remarks that the claim that science is ‘objective’ while religion is not needs to be questioned. Today, there is growing recognition among scientists themselves that their enterprise is deeply influenced by values and that, therefore, it cannot be said to be completely ‘objective’ or ‘value-neutral’. For instance, their very definitions of what constitutes ‘valid’ or ‘invalid’ knowledge, the paradigms that they choose to adopt, the subjects they choose to study, the data they select and the facts they ignore, the explanations they give for the phenomenon they study—all of these are influenced, often in subtle and not easily recognizable ways, by scientists’ values and worldviews. A particular scientist’s insistence that religion is not a valid system of knowledge is itself a value-based judgment of what constitutes ‘authentic’ knowledge. The atheism implicit in this definition of ‘authentic’ knowledge is a value-laden claim, and so it cannot be said to be an ‘objective’ one. If a scientist chooses to ignore the hand of the Divine in the universe, he operates with a definite subjective bias, which he may not recognize. To claim that science is ‘objective’ (and, therefore, ‘true’), while ‘religion’ is ‘subjective’ (and, therefore, ‘false’), is thus deeply problematic.

Further underscoring the argument that the logical positivist claim of science being based on ‘pure observation’ (in contrast, its advocates insist, to religion and spirituality) is untenable, Perumalil indicates that scientific observations are dependent on, and conditioned by, theories, and, in that sense, are selective. No scientific observation is free from presuppositions about the world. A scientist who claims that he has no extra-scientific belief-system and that he observes things exactly as they are does not recognize that how he observes what he does as well as the propositions he makes in connection with his observations reflects the particular belief-system that he adheres to, at the same time as it reinforces his faith in that same belief-system. The purely materialist explanation that an atheist scientist offers for a certain phenomenon may emerge from, as well as reflect, his own atheism, at the same time as it reinforces his belief in the atheist worldview.  In other words, Perumalil suggests, the positivist claim of theory-free, objective scientific observation needs to be questioned, and this can serve to bring religion and science into closer collaboration.

The growing disenchantment with the logical positivist image of value-free science, Perumalil tells us, is reflected in a growing opposition to the notion of a sharp distinction between science and values. The notion of ‘value-free’ science, he says, has made modern science an inherently destructive and malign influence in many ways. The positivistic conception of science, with no regard for the social, ecological, ethical and spiritual implications of scientific research, leads vast numbers of scientists to work on manufacturing deadly weapons, for instance, instead of addressing issues of mass hunger, and to produce technologies that have horrific ecological consequences. In this regard, Perumalil tells us, a new understanding of the vocation of the scientist is called for, one based on the production of knowledge that can help us collectively to live life lovingly and in a holistic manner. Positive value considerations could make science a more socially and ecologically beneficial enterprise than standard positivist science.  Although Perumalil does not say this, these value considerations could be supplied from the rich religious or spiritual traditions of the world. This could be one important way for religion and science to work together.

Perumalil reminds us that science focuses only on observable and measurable aspects of reality. At the same time, the world that science knows is a constructed world, constructed out of the dictates of nature and the creative powers of the mind. The world as it exists before the mind-nature encounter is beyond the scope of scientific knowledge. All that science knows of the world is an outcome of the progressive adaptation of the mind to nature and of nature to the mind. This means that science does not, and cannot, know the real world prior to experience. Moreover, it can hope to know only one aspect of reality, not the whole of it. Large parts of reality, which the empirical methods of science cannot access, lie outside the domain of science.  Religion, mysticism and spirituality can explain some of these aspects of reality, but we must accept yet other aspects that still remain beyond our ken as a mystery that human beings can never fathom. While science can provide us much knowledge of the physical world, and religion with an understanding of many aspects of our inner world, there is much, we must accept, that we can never hope to understand. God, the Ultimate Reality, can never be completely comprehended by us—neither by science nor by religion, as conventionally understood.

Many books on science and religion tend to be complicated and ponderous, and do not make for easy reading for ‘lay’ people, ‘experts’ neither in either science or theology. This book, however, is different, written in an easily understandable mode. Although authored by a Christian priest, it does not deal with Christianity in particular but with religion as a mode of relating to reality and its relationship with science. Not being linked to any particular religion, people of all faiths will find it engaging, in addition, of course, to those who do not subscribe to any religion at all.