Timbuktu is a well-known name in India. Even those who are illiterate and don't know much about the geography of the world use this name in phrases. Basically, this name tickles their funny bone and, thus, they believe that sending somebody to Timbuktu would be a funny thing. Not anymore. 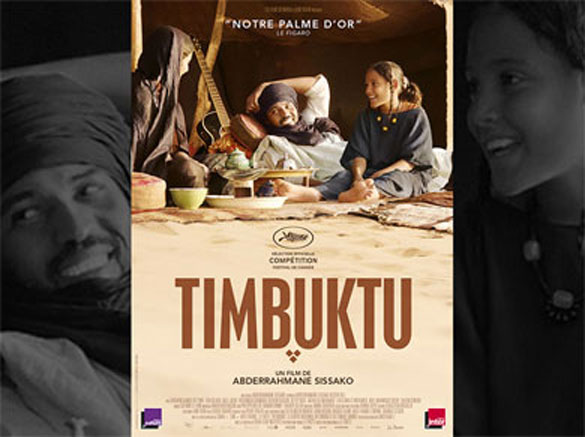 A nominee for the Palme d'Or at the 67th Canned Films Festival, Timbuktu is competing against some of the very bests in the best international film category.

Kidane (Ibrahim Ahmed) lives peacefully with his wife Satima (Toulou Kiki) in the sub-Saharan desert. His 12-year-old daughter is the most important person in his life. He lives away from the local colony and, thus, he is spared from the ever watchful eyes of the foreign occupants of the region. But, one day he gets into a fight with a fisherman Amadou and his gun accidently fires resulting in the death of the latter. Now, he has to be executed according to the new Sharia law of the area.

This film has several subtexts. They can be broadly divided into three - man versus man fight, clashes between ethnic groups, and language divide.

The film uses three languages to make its point - French, Arabic, Tamasheq. The natives communicate through Tamesheq, the invaders use Arabic and French/English are used when you don't know any of these.

The place is inhabited by African Black Muslims who are sick and tired of the Arabic-speaking jihadists. The foreigners have, in a way, taken over the whole area in the name of the holy war. They have banned music, football, cigarettes and many more things which are not pious in their eyes. Women are expected to be covered from tip to toe, which the earlier culture didn't impose. African Muslims find new laws absurd and, thus, they keep protesting against them but all in vein. The Arabs are ruling the region with an iron fist.

You can compare this tyranny with what India would have faced before independence when the British ruled us. Similar to the British, the Arabs also have their own justice system which works on the theory of 'eye for an eye', without considering the merit of the case. Kidane is also a Muslim by faith but he is not of African origin, and thus he is loathed by people like Amodou.

He is also not liked by the other brown Muslims of the area as he sings and dances, things that are termed illegal (haram) by the new rulers. A punishment of 40 lashes on playing football and of 80 lashes for singing is the easiest ones in the vicinity. Women are the biggest victims of the new traditions. Talking on a phone can fetch you unwanted attention and, thus, you need to let go of it or any other such things.

But, this doesn't end here as the real problem lies somewhere else. In one of the scenes, an African Muslim man comes to a local girl's house and proposes to marry her which sees rejection from the girl's parents. He threatens them of dire consequences and finally marries her by force in the name of religion. When the parents complain to the new rulers they refuse to believe them and give a certificate of piousness to the guy. In another scene, when a girl is asked about the person on the other side of the phone she says it's her brother. The man replies, "I don't believe you," and arrests her.

In one of the most powerful scenes of the film, some guys come to arrest people who are singing and then they realise that it's a song in praise of the Almighty (Allah). Such conflicts make it a fantastic film which focuses on inter and intra personal debates about the religion and faith.

What is the choice left with the inhabitants of the region? Should they leave their homes and head for unknown territories like many of their neighbours? Or, should they just reject the new norms and start fighting? Or, should they find a point of peaceful co-existence?

The local religious leader, who doesn't grow beard, talks about a point of equilibrium and always stands up for the righteous things is up against an internationally funded movement and thus is bound to bite the dust.

It's a film about the misconceptions about faith and how it can be misinterpreted. It's a film which deals with human emotions like fondness for music, eagerness to play a sport and praying to the god in any manner possible.

Timbuktu is a tale of how man is responsible for wrong twist given to the term religion. Whosoever is the culprit, the victim will also be the innocent. It wouldn't come as surprise if Timbuktu wins the best international film award with its hard-hitting theme and subtle performances.