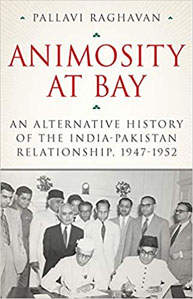 “Animosity at bay: An alternative history of the India-Pakistan relationship, 1947 – 1952”

In an interesting academic work which has recently hit the stands, Pallavi Raghavan, Assistant Professor of International Relations at Ashoka University, forcefully argues that bilateral dialogue between India and Pakistan, especially interactions between their bureaucrats in the period studied (1947-1952) `opened up spaces for resolving problems in the aftermath of Partition’ and `seemed to arrest the pace of the slide towards hostility;’ so evident, unfortunately, in the `bleak’ state of ties today.

Based on disciplined historical analysis and drawing on a rich wealth of archival material, from the National Archives of India, Ministry of External Affairs’ files and Dominion Office records of the Foreign and Commonwealth Office, London, the author painstakingly delves into the frayed post-Partition environs, focusing on the effort to find an even keel to bilateral relations. The narrative describes the dangerously escalating backdrop of an almost unmanageable flow of Hindu refugees from East Bengal, which did not prevent signing of the Nehru- Liaquat Pact in April, 1950. The book examines several other vexatious issues governing bilateral ties in those early years of independent State-hood.

A premise suggested at the outset is that actions of politicians and bureaucrats dealing with the consequences of partition were determined by a variety of considerations: one of the critical priorities for both governments in the midst of all the chaos and violence of riots, majorly in Punjab and Bengal, was not only to tackle questions of law and order but `preparing more, an architecture’ to deal with, and promote their own interests as `two separate States’. `What mattered was not the inadequacy of the state apparatus in either country to contain the fallout, but rather that this should be seen to exist within a bilateral framework of action’.

Committees were set up at the highest levels to deal with assets division, infrastructure of respective foreign policy establishments, efficacy or otherwise of the soon to be disbanded Punjab Boundary Force and work was done on the abducted women’s cell, on both sides. The author contends, though these processes were far from smooth, `at heart, regardless of incessant disagreement about intentions and methods’, they remained a `collaborative’ exercise.

The Nehru – Liaquat Pact, a joint agreement to extend jurisdiction of respective high commissions to the welfare of minority citizens across borders, `represented something quite unusual – to states as notoriously prickly about their sovereignty’ - it seemed ‘a way of bolstering their claims to separate and viable statehood’. The author examines in detail in this chapter how deliberations evolved in the inter-dominion conferences on minorities and the refugee issue.

Both Nehru and Liaquat had to contend with domestic pressures `and formidable opposition’ from powerful political figures like Bidhan Roy, then Chief Minister of West Bengal (on the Indian side) and among others, from Ghulam Muhammad, Pakistan’s minister for minorities. In particular, Nehru had to face a lot of criticism from his own Cabinet members, K.C.Neogy and Shyama Prasad Mookerjee. Ironically, Sardar Patel, India’s Deputy PM and Home Minister supported Nehru at this juncture. Pakistan’s only minority representative in the Liaquat cabinet, J.N.Mandal resigned in October 1950, sending `a brutally worded letter’ castigating the Pakistan government’s unsympathetic position on Hindus there. Nevertheless, the author argues that the process was `based on a realization that the way towards a more amicable relationship’.. `lay in their ability to acknowledge, and then further cement the basis of partition, and correspondingly, the basis of existence for both states.

Dealing with Evacuee Property in Chapter 3, the author holds that ` South Asia’s partition story is about property - about the sin of breaking the sacrosanct bond with ones’ land.’ The Ministry of External Affairs played a crucial role `in shaping the debate’ about how rules ought to be fashioned, on the basis of reciprocity. Though this principle remained `the cornerstone that held up the structure of legislation’ in both countries, in between, many discordant considerations cropped up in individual instances (as in the fascinating House of Chamba case), where impromptu and pre-emptive state action on either side seemed to go at variance. Several conferences were held between the two sides, revealing `two parallel processes: partly simply an ugly exercise about land-grabbing and ownership’, but also `an attempt to emulate systems of governance that had been established elsewhere in the world.’ The author finds here that ultimately, ` the rehabilitation of refugees was critical in fashioning the narrative of legitimacy to both nation states.

The correspondence between Nehru and Liaquat on the `failed’ No War Pact is examined in Chapter 4. It offered an opportunity for India and Pakistan to clarify their positions internationally as mutually exclusive entities – demonstrating that `the business of disentangling’ `did not necessarily mandate stances that had to be hostile to one-another’. The process also illustrated ` the importance of atmospherics’ in the conduct of relations. Though some of the relevant issues figured at the United Nations, diplomats of big powers like USA and UK in India advised their governments not to be unduly alarmed over prospects of imminent war.

Though the book ends in 1952, in Chapter 5 the author dwells on a pre-history on clauses connected to the Indus Waters Treaty of 1960, which evolved during this period.

Raghavan’s seminal effort is a timely reminder that `despite traumas of the very worst kind’, `co-operation and dialogue’ can be worked out between two states seeking assertion, if `contentious issues are addressed with a degree of circumspection and prudence’.

Original Headline:  Hear Them Out