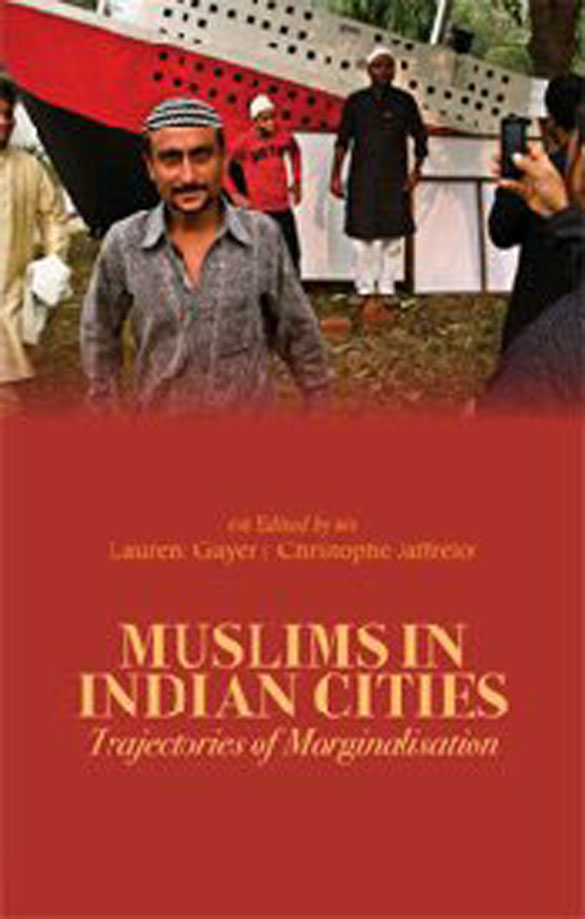 The welfare of the minority communities is the barometer of the health of a democracy. Going by that dictum, this book shows the poor health of Indian democracy, as reflected by, amongst other things, the marginalization of Muslim minorities. This edited volume contains eleven essays well written essays, which deal with study of the living spaces of Muslim community. The contributors to the volume have combined the field study with analytic observations of the quality of lives of Muslim community in these cities, some from the riot prone areas and other in the cities from former Muslim states. This largest religious minority of India, Muslims; have suffered a strange situation and have been subjected to communal violence and economic discrimination; both. These twin processes has given rise to the dynamics of politics from within the section of community which gives more importance to the identity issues. The violence and discrimination are the major factors leading to their marginality. This book is a unique contribution to the study of Indian Muslims and shows the immaculate editorial imprint of Chritophe Jafflerolt, who is a major authority on the politics of Hindu Right wing along with Laurent Gayer. The editors have not only contributed to study of one of the cities of the eleven discussed in the book, but their introduction to the volume and conclusions tightly sum up the theme of the book, the marginalization of Muslims from their earlier position of centrality.

The book revolves around the ghettoes, slums and other forms of segregation, including self segregation of the community during last six decades in particular. While the intensification of this phenomenon has taken place during last three decades in particular since the rise of Hindu nationalism, in conjunction with the compliant state. This whole trajectory of the phenomenon has shaken the faith of the community in the impartiality of the state. Muslims in India still bear the stigma of being responsible for the vivisection of the country, which is nowhere near to the truth. While making observations about the socio-economic and political condition of the Muslims, the editors in particular base their analysis around the fact that Muslims in India are no uniform community. Sachar committee and Ranganath Mishra Commission have brought out the dismal condition of Muslims, their discrimination in jobs and most of the aspects of economic life, in the arena of representation in jobs and electoral politics. To blame the madrasas for the plight of Muslims is also very much off the mark as only four percent of Muslim children go to the madrasas. It is in this light the talk of reservation for the Muslim community is gathering steam.  Their representation in Lok Sabha, Parliament, is constantly declining, today with 13.4 % (2001 data) of Muslims, in Lok Sabha they are just 5.5%. The caste as factor of Muslim community is very much there, but the caste factor in this community is overall eclipsed by the religious identity as a minority. Comparatively Muslims are a more urbanized religious group, and the fact is that urban Muslims are poorer that their rural counterparts. It is in this backgrounds that the book sets out to compare the place which the Muslim community occupies in the 11 Indian cities to observe that this minority is declining, in a non linear way. To understand these case studies included in the volume, authors survey the position of Muslims amongst the local elite group. The case studies also look at the condition of Muslims localities in Indian cities for testing the Ghettoisation thesis. The volume is a unique mix of quantitative with qualitative approach, drawing from the richness of each.

The case studies do show the perception of three communities that ‘we are being pushed behind’. In Mumbai the large section of Muslims are forced to live near the largest garbage dump. One of the contributors Qudsiya Contractor argues that ‘state through its violent spatial strategies and the Hindu right through its cultural populism and communal politics, have played a crucial role’ in marginalization of this minority.  Editors in their study of riot prone Ahmadabad, cull out a painful observation that in areas where there are no Muslims in Ahmadabad are regarded as ‘good’ areas! This observation tells a direction in which Indian democracy is being pushed over a period of time.  In Ramganj in Jaipur, Gayatri Jaisingh Rathore observes that ‘social interaction with other religious groups is limited and the problems related to hygiene, education and unemployment abound’.

The editors quote Percival Spear approvingly where he says that, being relegated to the second class citizenship; Muslims have no future for them except their eventual absorption in Hindu mass. The decline of Muslims is not uniform all over India; they have been more resilient in Hindi belt, also known as cow belt. The process of ghettotisation is also very diverse. In this bleak scenario a section of new Muslim middle class is also emerging, around areas of meat export, leather goods, and Unani medicine and also in the newer areas like agribusiness, IT, pharmaceuticals and real estate. Connection with Gulf countries has also helped them in a major way. The book gives an interesting insight into the process of cultural occultation, which presents itself as ‘de-Islamized narrative’, which may be a tactical one, a survival mechanism. At the same time there is also re-Islamisation also there. How this dynamics of cultural occultation and re-Islamisation will play itself, time alone will tell.  The totality of the process can be summed up in post partition fall and identity politics, over determination by communal violence and political obliteration and third is resilient cosmopolitanism. The totality of the process gets manifested in the spatial process of mixed localities, Enclaves, slums and Ghettoes. Mixed areas are replete with nostalgia and vestiges of syncretic culture. Enclaves are due to interaction of a desire to share common space with members of same community mostly after being pushed to ‘safe’ areas after communal violence. Ghettoes are dynamic self segregation in search of security.

The book comes are a very incisive indictment of the present state of affairs of Indian state, which is heavily tilted due to the communalization. The book gives not only a powerful incisive analysis and observation of Muslim community, but also presents the sad plight through which community is passing at the moment. The frightful prospect of de-Islamisation is very much in the store. While coming powerfully on these major observations, it finally dismisses the need for reversal of the phenomenon through political and social initiatives.  Barring the prescription of Mohalla committees, the book is silent on the immense possibilities of need for initiatives in the field of education, need for campaigns for physical security, the dire need to job provisions and economic alleviation, the subjective intervention to bridge the divides along religious lines needed to be mentioned and elaborated in the book dealing with the issue in such a profound way. Its content is a wakeup call to reverse the ongoing negative processes and need to try to restore the processes for communal amity and social peace, a pre requisite for development of any nation and a community.