Wadjda and the Saudi Women Fighting Oppression From Within

It would be hard not to like Wadjda, a new film from Saudi Arabia and the first to be directed by a woman in the male-dominated kingdom. A rare cinematic glimpse of a barely known country, the film tells the story of an independent-minded, cheeky young girl, Wadjda, who wants to buy a bike so she can race with her neighbour, Abdullah (who she shouldn't be playing with).

Some of Saudi's multiple, choking, all-encompassing controls over women are thereby exposed: the prohibition on women driving or mixing with men; the taboos over laughing or talking in public, or riding bicycles as these might defile virginity. However, the women in Wadjda – and the titular hero especially – are not depicted as wholly passive victims, but rather come across as striving, enterprising and possessing some agency within the constraints imposed upon them. 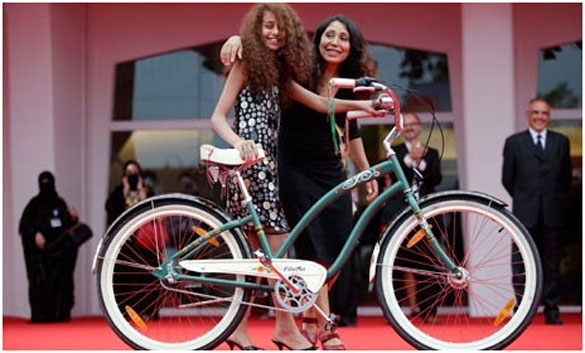 Saudi Arabian director Haifaa al-Mansour (right) and actress Waad Mohammed pose with a bicycle on the red carpet during the premiere of Wadjda during the 69th Venice Film Festival in 2012. Photograph: Max Rossi/Reuters

It has brought Saudi Arabia into the spotlight at a time when there are mixed reports about the country's emerging social changes, or lack of them. In January, the Saudi monarchy announced that women would for the first time be appointed to the Shura council (the country's closest thing to a parliament) and soon be given the vote in municipal elections. Last year, Saudi female athletes took part in the Olympics for the first time. Earlier this year, the kingdom lifted a ban on women working on supermarket checkouts, in lingerie stores and on cosmetics counters. Then, last month, it was announced that women could ride bikes – albeit clothed head-to-toe, accompanied by a male guardian, in restricted areas and for recreation only. Responding to the bike shift, Wadjda's director, Haifaa al-Mansour, has said: "We should be happy that changes like this are taking place. I know they seem like they are small and they don't mean much, but it shows that attitudes towards women are changing, and women are getting more liberties, even if it is very slowly. There is still a long, long way to go, but hopefully things like this pave the way for bigger changes."

Others have been outraged at a minuscule and practically meaningless concession – some Saudi commentators apparently wondered if the ruling was an April fool's joke. And of course the overriding system of subjugating women endures – a shocking reminder of that came a week ago, as two of Saudi's prominent women's right activists, Wajeha al-Huwaider and Fawzia al-Ayouni, were sentenced to 10 months in prison and a two-year travel ban, for "kidnapping" a Canadian woman (who was trying to flee an abusive marriage and reach the Canadian embassy in Riyadh).

But Wadjda, and the conversations around it, seem to be part of a wider debate over feminism, women's rights and the Muslim world – and it has several layers. One concern is that the Saudi example is all too often held up as some cookie-cutter of practices in the Middle East – when it obviously is not. Then there is the problem of separating out grassroots support from hypocritical government hyperbole. Britain waged wars in Iraq and Afghanistan, ostensibly, in part, to "liberate" women (incidentally, a well-worn colonial pretext) and at the same time maintains close ties to Saudi Arabia, the very worst offender on that front.

Meanwhile, there's a lingering suspicion of the very term "Muslim feminism" – as though this is somehow an oxymoron. Shelina Zahra Janmohamed, author of Love in a Headscarf and a commentator on Muslim women, says there permeates a view among western feminism that "you can't be a proper feminist if you are a woman of faith". From the anti-Muslim, breast-baring slogans of Femen ("topless jihad day", anyone?) through to the French burqa-banning advocates, there's a recurring desire to "liberate" women from oppressive religion – an impulse sometimes referred to as "white saviour feminism". Nowhere in these supposedly well-meaning endeavours is the voice of Muslim feminists who talk about reclaiming their religion, striving to untangle it where needed from patriarchies that dominate and misconstrue it. Wadjda nods to that sentiment in scenes where the camera stops over mother and daughter at prayer together – their faith a part of their femininity and not at odds with it.

One blogger, Randa Abdel-Fattah, writes: "Ultimately, I do not see Islam as the problem; I see it as the platform for change. I believe in gender equality – including the rights of Muslim women to dress as they please – because, as a Muslim feminist, I value agency, choice and autonomy."

And yet there persists a notion that Muslim women across the Middle East have all somehow internalised their own oppression. Feminists who try to tackle subjugation of women from within faiths, within differences and within their own communities are asking to be heard – but who is listening? One New Zealand-based blogger, Saziah Bashir, has written: "You have Muslim women talking to Facebook and Twitter and Tumblr and screaming 'Listen to me!' and yet western feminists are instead choosing to do the equivalent of patting us on the head and saying, 'No, dear, no'."

Hopefully a film like Wadjda will expose not only the systematic denial of women's rights in Saudi Arabia, but also make us think more about the actual women in that country, trying to deal with it all and trying to challenge it from within.