According To the Law of Action and Reaction, We Get What We Give 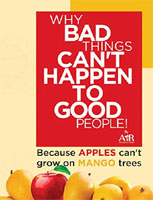 Almost every human being seeks happiness and, conversely, tries to avoid pain. Yet, why is it that all of us experience painful situations every now and then? Why is there so much suffering in the world, including in our own life? Most of us must have reflected on this question at least some time or the other.

Another, related, issue is the question of what many of us might regard as unwarranted pain in the world. Why is it, we may ask ourselves, that people who we think are very good and kind sometimes face excruciatingly painful situations in life? Surely, we may tell ourselves, they didn’t deserve it. We might be able to accept something ‘bad’ happening to someone who has done a grievous wrong to somebody else as a just punishment for his action, but we might find it impossible to understand why a person we think is noble might sometimes face the same sort of predicament. On a larger scale, the enormous amount of pain that millions of people are subjected to in large parts of the world as a result of war, poverty, displacement in the name of ‘development’ and so on may make us lose hope in the possibility of goodness and justice in this world. We may be led to complete despair.

For religious people who believe in God, the Creator and Controller of the universe, this what we may regard as unwarranted suffering may pose major theological questions concerning the power, goodness and justice of God. If God is, as many religions say, All-Powerful, All-Just and All-Good, why does God allow what we might think is undeserved suffering and pain in this world, and on such a massive scale? If God is as believers say God is, why doesn’t God put an immediate end to all misery in the world?

Atheists often raise these sorts of questions in their critique of the concept of God. If God were really true and if God were truly powerful, good and just, as is claimed by those who believe in God, surely God wouldn’t have permitted ‘innocent’ people to suffer, they would say.

For their part, theists respond to the same questions by articulating theories that seek to show that the fact of human suffering can actually be easily reconciled with faith in the existence of a loving, powerful and just God. Different theistic traditions might offer somewhat different theories in this regard, though.

This brilliantly-written book by Bangalore-based spiritual teacher Atman in Ravi or AiR seeks to provide an explanation of human suffering—even why ‘bad’ things happen even to supposedly ‘good’ people—from a theistic perspective that is based principally on two tenets: firstly, the Law of Action and Reaction, and, secondly, belief in rebirth.

According to the Law of Action and Reaction, we get what we give. We reap what we sow. To use a simile from the book, apples can’t grow on mango trees. If we sow a mango seed, we can’t expect that when it turns into a tree it will produce apples. What it will produce is mangoes! In the same way, if we do something bad, we are bound to receive the same in return, now or some time later. Conversely, if we do a good deed, we are bound to receive good in return, in this world or the Hereafter. Probably all religions are on common ground here.

All religions have a concept of the Hereafter, the afterlife that follows the death of the body. But the way the afterlife is conceived is different in various religions. Some religions believe that human beings get just one life, after which they will either go to Heaven or Hell forever, as a reward or punishment for their actions while on earth as the case might be. Other religions believe in a cyclical theory of rebirth, determined by one’s actions while on earth—a perspective that the author also supports. Based on the theory of rebirth, the book argues that much of the suffering that people face in this world could be a result of negative actions they had committed in this or some previous life. Thus, for instance, if a person we regard as ‘good’ or a little child faces a major calamity, it could be that this is a just reward for some wrong they had committed in a previous life. Thus, we create our own pain—it is not the result of some arbitrary decision of God—the author seems to suggest. We have no one but our own selves to blame for our miseries. In this way, faith in an All-powerful, All-just and All-good God can be reconciled with the fact of human suffering.

Along with seeking to explain the fact of suffering, the book provides insights on how to handle suffering—our own as well as other people’s—and how to lead a life that can liberate us from suffering forever.

Not everyone will, of course, agree with everything that this book says. Atheists would naturally not agree with its assertions about the Creator God. For their part, theists from religious traditions that uphold a different theory of the afterlife might differ with regard to some of its claims. But that said, this book is a great must-read. It seeks to provide a explanation of human suffering and liberation from it from a religious perspective in a manner easily understandable to even those with a minimum of prior theological knowledge.

(Like many other books by AiR, this book can be obtained from Amazon.in)