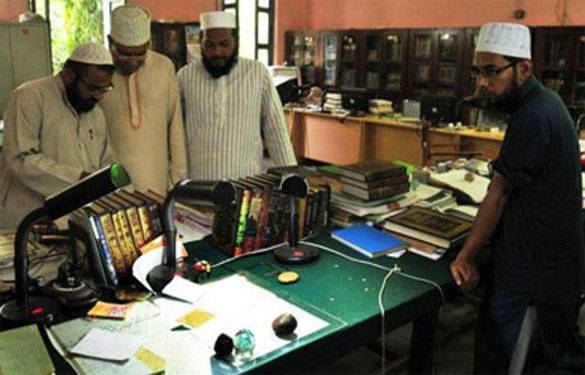 The translation of the books will help to distinctly understand the contribution that Arab medicine had made to medical science. Photo: G. Ramakrishna

A doctor, while examining a head injury, should look for dysfunctional speech, hearing and vision; the instructions that seem right out of an MBBS text book was written in Arabic in 925 AD by scholar Abu Bakr Al-Razi. All of Al Razi’s medical work which runs into 24 volumes named Kutabu’l Hawi Fi’t-Tibb will soon be translated into English and converted to e-books in Hyderabad.

The multi-Crore, translation and digitisation project will be undertaken by Dairutul Maarifil Osmania, a centre that the VI Nizam, Mir Mahboob Ali Khan Siddiqui, established in 1888.

The centre has edited and compiled 240 manuscripts that runs into 800 volumes with two Lakh pages.

The translation of the books will help to distinctly understand the contribution that Arab medicine had made to medical science.

“Al Razi could have been the first medical theorist to state that fever is not a disease but a symptom of some other illness. He lists out a 1,000 varieties of fever that are symptoms to a 1,000 varieties of diseases,” said Md. Mubeen Iqbal, an Arabic scholar who has done translations of ancient texts.

Al Razi’s medical textbooks details out symptom based diagnosis. Each of the 24 volumes look into one aspect of human illness. For instance, the first volume is titled, diseases of the head and the second diseases of the eye. The third volume is on diseases of the throat, ear, nose and teeth.

As per the project, it is not just Al Razi’s work but all the two Lakh pages of Arabic scholarship on medicine, history and religion will be translated into English, centre officials said. “Among the books which are to be translated are Kitab-al-Umda which is on surgery. All our compilations are authentic as they are based on original manuscripts collected from countries including Turkey, Germany and Spain,” said Prof Mustafa Shareef, Arabic scholar and director of the centre.

The oldest compilation that the centre has dates back to 9th century AD. “Musnad Abu Yala’s Hadis or collection of Prophetic traditions was the first book that was compiled from manuscripts,” the director said. The manuscripts are collected in microfilm format. The Nizam had established the centre to improve on Hyderabad state’s wealth of knowledge.

The Union government which has in principle agreed to fund the project is expected to release Rs. 37.9 Crore in the coming month. As per the calculation of Dairutul Maarifil Osmania, the translation work will alone cost Rs. 25 Crore.