Judaism and Islam as Synergistic Monotheisms

Name of the Book: Judaism and Islam as Synergistic Monotheisms: A Reform Rabbi's Reflections on the Profound Connectedness of Islam and Judaism 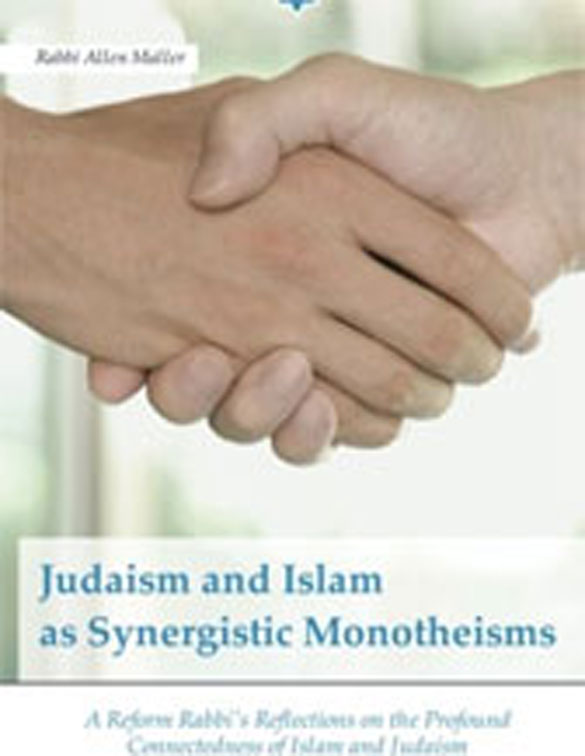 Current political tensions in West Asia over Palestine/Israel might seem to project a different image, but contrary to what many think, there is actually much in common between Judaism and Islam. At a time when the conflict over Palestine/Israel could easily escalate into a Third World War—or even, as some think, into a final battle of global proportions that might herald the End Times—it is good to remind ourselves of this fact. This is a task that Rabbi Allen Maller, a Jewish religious scholar based in the USA, has taken upon himself in this very timely book. Interestingly, the book is a collection of articles on Muslim-Jewish relations by the author that have been published over the years in several Islamic websites, a testimony to the fact that there are also several Muslims who, like Rabbi Maller, are eager to promote friendship between Muslims and Jews.

Readers will not be left unimpressed by the Rabbi’s very warm appreciation of Islam. The Rabbi provides some insights into his own personal journey of studying Islam—about how he, as a ‘Reform Rabbi, ‘learns from Muhammad’, as he puts it. He explains that he first became interested in Islam when he studied it at the University of California Los Angeles almost half a century ago, and says that he has continued this study ‘off and on’ since then.

Impressed by the teachings of the Prophet Muhammad (whom he considers as a prophet sent by God) while still identifying as a Jew, the Rabbi sees himself as a ‘Muslim Jew’, the word Muslim here being understood in the broader sense of one who has submitted to the One God. “Actually I am a Muslim Jew i.e. a faithful Jew submitting to the will of God, because I am a Reform Rabbi”, the Rabbi clarifies. “I am faithful”, he explains, “to the covenant that God made with Abraham–the first Jew who was a Muslim (faithful monotheist)”, adding, “and I submit to the covenant and its commandments that God made with the people of Israel at Mount Sinai”. At the same time, he says, “I believe that the Quran is as true for Muslims as the Torah is true for Jews.”

Similarities between Islam and Judaism

A major focus of the book is to draw out some of the similarities between Judaism and Islam. The Rabbi says that the most important belief that unites Muslims and Jews is “the faith in the One God as the Creator, Sustainer and Law-Giver of the universe.” The Rabbi reminds us that in the Quran, “one of the most recounted narratives is the story of the bondage of the Children of Israel and their deliverance from Egypt’s Pharaoh.” Both Islam and Judaism, the Rabbi goes on, “teach the need for establishing the Law of God on earth, so that there will be peace and harmony flourishing everywhere.” The Rabbi believes that the Quran and the Torah “complement each other”, and opines that “it is false and narrow minded to say that one contradicts the other.”

Another aspect that the Rabbi focuses on is what he sees as the close similarities between the teachings of the Prophet Muhammad and the particular Jewish tradition that he is affiliated with, ‘Reform Judaism’, which began in Germany almost two hundred years ago and which is now the largest Jewish denomination in the USA. The Rabbi writes that in many ways reports that relate to the Prophet Muhammad’s comments about Orthodox Judaism, and religion in general, “prefigure the thinking of Reform Rabbis some twelve to thirteen centuries later.” The Rabbi relates that “Reform Judaism”, which seeks to make the practice of the faith more easy and simple, is in many ways, closer to early Islam than it is to Orthodox Judaism”. He believes that “the reform movement in Judaism would have started 14 centuries ago if the Jews of Muhammad’s time had followed his teachings.”

While recognizing the common ground between Islam and Judaism, the Rabbi does not ignore the existence of considerable antipathy among many Jews and Muslims today. One source of anti-Jewish feelings among many present-day Muslims that he highlights is a selective and distorted interpretation of references to Jews in the Quran. These are verses that, he says, actually only apply to some Jews (and some Christians) but are misinterpreted to apply to all Christians and Jews.

The Quran correctly understood does not denounce all of the Children of Israel, the Rabbi points out. Every community, including the Muslim Ummah, he says, “contains groups of faithful believers and a party who disbelieve”. The same holds true for the Jews. The Quran recognizes this fact when it distinguishes between Jews who follow the path that God has established for them from those Jews who have strayed from this path. For instance, it states: “There is among them a party on the right course; but many of them follow a course that is evil.” (5:66)

Defining Christians and Jews as “descendants of apes and pigs”, the Rabbi rues, “is notoriously widespread today in religious, educational and public discourse in the Arab world.” But, he explains, “In truth, the Quran never states all Jews were turned into apes or pigs; but clearly states that only some Jews were”, and in this regard he quotes the Quran as saying: “…They are those whom Allah has cast aside and on whom His wrath has fallen and of whom He has made some as apes and swine…” (5:60)

This means, the Rabbi says, that in every generation there were some Jews who failed to live according to the covenant that God had made the Jewish People; just as in every generation some Muslims within the Muslim Ummah have failed to live according to Islamic teachings. In every religious community of human beings there are many individuals who act like apes and pigs and fail to repent and amend their behaviour. But to claim that this describes all Jews (and Christians), as some Muslims do, is thus absolutely unacceptable from the Quranic point of view itself. Those who imply that Christians and Jews in general are “the descendants of apes and pigs”, the Rabbi insists, “are Satans spreading misguidance for political purposes. Their teachings should be rejected.”

Far from condemning all Jews (and Christians), the Rabbi reminds us, the Quran clearly refers to some of them as firmly on the right path:

“They are not all alike. Some of the People of the Book are firmly committed to the truth. They recite the Verses of Allah during the hours of night, and remain in the state of [prayer] prostration before their Lord.” (3:113)

The Quran is also very explicit at stating that as in the case of Muslims, those Christians and Jews who adhere to their covenant will be rewarded. Thus, it says:

“Those who believe (in the Quran), and those who follow the Jewish (scriptures), and the Christians and the Sabians; any who believe in Allah and the Last Day, and work righteousness, shall have their reward with their Lord; on them shall be no fear, nor shall they grieve. (2:62)

Along with critiquing the marked tendency among many Muslims to denigrate all Jews (and Christians) on the basis of misinterpretations of certain Quranic verses, the Rabbi also critiques exclusivism and supremacism among a sizeable number of Jews, which derives from distorted interpretations of their faith. Thus, he emphatically insists that (contrary to what some Jews may believe), “Jews are not THE chosen people”. They have a “sacred relationship” with the one God, but, he says, “they are not the only ones to do so.”

Another concern of the book is to highlight the fact that, contrary to what many might think, conflict has not always been the defining feature of Jewish-Muslim history. Thus, the Rabbi writes, “Jews in Sunni Muslim lands have rarely been forcibly converted; as frequently happened in Christian lands.” In a fascinating chapter titled “A Rabbi Allied with Prophet Muhammad”, the Rabbi highlights the little-known story of Mukhayriq, a Rabbi from Medina, who died fighting, along with the Prophet Muhammad and the Muslims, in the Battle of Uhud against the opponents of Islam. He might have been “the first Jewish martyr of Islam.”

Appreciation of the Quranic Understanding of Religious Pluralism

Yet another aspect that the book focuses on is the Quranic understanding of religious pluralism, which the Rabbi sees as being able to accommodate remarkable religious diversity, including the Jewish faith. “The strong support that the Quran gives to religious pluralism”, he says, “is a lesson that is sorely needed by the religious fundamentalists of all religions in the world today; who prefer making claims of truth, to doing acts of kindness and love.”

According to the Quran, God has sent prophets to every nation, and they have taught the same basic religion—of submission to the One God. The Rabbi quotes the Prophet as saying: “Prophets are paternal brothers; their mothers are different, but their religion is one.” This suggests the basic oneness of the teachings of all the prophets. “Since all monotheistic scriptures come from the one and only God,” the Rabbi says, “we should view other scriptures as potentially enriching our own understanding and appreciation of our own scripture”—surely a powerful way to bring people from different faith traditions into closer communion. This is possibly what the term ‘Synergistic Monotheisms’ in the title of the book refers to.

The Rabbi writes that “God chose not to create human beings as one nation or with only one religion so that each religion could compete with all the others in order to see which religion produces the highest percentage of moral and loving people; and which people best embody in their personal and communal lives the moral teachings of their prophet.” In this regard, he quotes the Quran (5.48):

“For every one of you did We appoint a law and a way. If Allah had pleased He would have made you one people, but (He didn’t) that He might test you in what He gave you. Therefore compete with one another to hasten to virtuous deeds; for all return to Allah, so He will let you know that in which you differed.”

This means, the Rabbi believes, that religious pluralism is the will of God. The ongoing conflict between Jews and Muslims, he insists, is thus not religious but political. One crucial implication of this is that if Muslims and Jews were to understand their religion in the right manner, it could be the most effective means for bringing them closer together and for solving what seems to many to be the almost wholly insoluble political conflict over Palestine/Israel that threatens to engulf the whole world.

This book comes straight from the heart of a man who seems deeply committed to peace between people who (claim to) follow different religions, someone who is also deeply pained by the horrors being committed in religion’s name. It is a beautiful example an appreciative understanding of another religion by a person who seems deeply rooted in his own. For those concerned about the conflict over Palestine/Israel—an issue on which global peace seems to hinge—and about relations between Muslims and Jews, and peace in the world generally, this book is a very precious gift.

Many of Rabbi Maller’s writings are accessible on the Internet, including on his website www.rabbimaller.com