Lifting Veil on Love and Islam 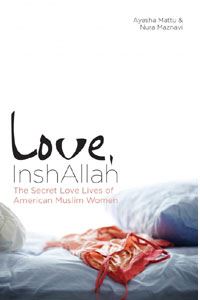 Zahra Noorbakhsh was 14 when her Iranian immigrant mother discovered that Zahra was defying the family ban on mingling with boys: one was among her four friends heading to the movies together.

So the sex education talk that in a different life, back in the holy city of Qom, would have waited for her bridal night was instead delivered in the parking lot of a mall in Danville, Calif.

“Zahra, you have a hole,” her mother started. “For the rest of your life, men will want to put their penis in your hole. It doesn’t matter who you are, what you look like, who is your ‘friend.’ ”

Young Zahra staggered from the car thinking: “I have a what?! A hole? Where? Was that what I had missed in sex ed the one day I had the flu?”

That exchange is recounted in a new anthology of essays about flirting, dating and sex published on Tuesday under the title “Love, InshAllah: The Secret Love Lives of American Muslim Women.”

The two editors, Ayesha Mattu and Nura Maznavi, sought to create a book that dispelled the stereotype of Muslim women as mute and oppressed. They gathered 24 portraits of private lives that expose a group in some cases kept literally veiled, yet that also illustrate that American Muslim women grapple with universal issues.

“Inshallah,” the Arabic word for “God willing,” was included in the title because “it captures the idea that everybody is searching for love,” Ms. Maznavi said.

The anthology joins half a dozen books in the last two years that have been written by American Muslim women about their lives.

“We are thought of as being submissive and given in marriage to big, bearded men,” said Ms. Mattu, 39, an international development consultant, “while the reality is that a majority of American Muslim women are creative, funny, intelligent and opinionated.”

Since the Sept. 11 attacks, American Muslims have agonized about lying low versus stepping forward to convince other Americans that they are not a fifth column. Controversy erupts around even innocuous television shows like “All-American Muslim,” which presented five families in Dearborn, Mich., as inherently normal.

Even as the editors, both American-born daughters of immigrants, sought to fight society’s tendency to consider all Muslims extremists, they also struggled with the cultural proscription against describing private lives in public. “Within the American Muslim community, there has not been a space for women to speak openly about their love lives,” said Ms. Maznavi, a 33-year-old civil rights lawyer.

The book followed a tortured path into print. The two editors first dreamed up the idea five years ago over coffee in San Francisco, laughing about what a Muslim dating movie might be like. Their agent dropped them because publishers felt the book failed to fit into one category like religion, academia or chick lit.

So they waited until Pitchapalooza 2010, an annual cattle call at the literary festival Litquake in the Bay Area, where writers get a few minutes to pitch a book idea to a panel of industry experts.

On their night, more than 50 showed up, too many for everyone to pitch, so names were drawn from a hat. The two women sat through some 15 other pitches before Ms. Maznavi’s name was drawn, second to last.

In the tension, Ms. Maznavi said, she forgot her memorized pitch, so she winged it. The audience went wild, with men approaching them afterward to say things like, “I didn’t know we were allowed to touch you.”

They secured new agents that night, then a publishing contract with Soft Skull Press, a small house in Berkeley, Calif., the next month.

They solicited submissions from across the United States, mainly through Facebook and Twitter, winnowing down a couple of hundred to a collection that represents women with origins in East Africa and across the Middle East to Pakistan, as well as a mixture of ages, professions and sexual orientations.

Some experiences speak to issues broader than those concerning Muslim Americans: The woman who discovers that her dream date already has a young daughter, or the woman who comes out to her parents only to learn that they had been reading her blog for years.

But many issues are particular to their religion, like what to do when your date surprises you with a bottle of Champagne, and you have to explain that Muslims cannot drink alcohol. Even in families that are not highly observant, numerous women grapple with the question of premarital sex.

A Jewish convert to Islam detailed the pain of alienating her father, while another contributor spoke with rapture about joining a polygamous family.

Angela Collins Telles, 36, another convert to Islam, described the almost unbelievable twists of fate that she overcame in finding her Brazilian husband, including all manner of un-Islamic behavior, starting with their first chance encounter in a bar and proceeding through a platonic night together in a hotel room.

“I know my story will be looked on with a frown by people who know me, but that is O.K.,” said Ms. Collins Telles, a former elementary school principal, particularly since her husband also converted, and they now have two small sons.

The collection includes just one truly sad tale, that of a woman describing the loss of her Italian fiancé because he condemned her faith, lumping together all Muslims as terrorists. She had already quit her job in New York and was on the verge of flying to Europe when the cataclysmic fight erupted.

“I did have a scarring experience,” said the woman, who wrote under the name Leila N. Khan. “There is this fear of being told, ‘I told you so, you shouldn’t have gone outside the faith.’ ”

The difficult experiences were all the harder to write about, contributors said, knowing they could provide ammunition to those who paint all Muslims as somehow un-American.

“It is doubly hard for Muslim women, because we want to complain about our men without everyone turning around to say, ‘See, I knew they were all crazy terrorists,’ ” said Ms. Noorbakhsh, a 31-year-old comedian, who after describing her sex education talk goes on to detail losing her virginity in college. “You leave yourself vulnerable to people using your voice to attack your community, so we kind of censor our own voices.”