What Went Wrong With Caliphate?

Since the dawn of Prophethood which culminated and ended with the revelation of the Last Testament i.e. Quran on Prophet Muhammad (pbuh), the world witnessed emergence, evolution and now estrangement with a civilization known as Muslim Civilization. As is held by the Muslim faith this message enshrined in the Holy Quran is the final one till Doomsday hence complete in every aspect and guidance in every sphere of life. It is in keeping view with this Universal message of Islam and Quran that the first generation of Muslims were able to dominate all the spheres of life whether social, political, economic, cultural, literary and educational unlike its immediate rival Christianity which believed in the doctrine of ‘Give God what is God’s and Give Caesar what is Caesar’s’, Islam did not believe in such water tight compartmentalization. The teachings, injunctions and commandments of Islam held an upperhand in all the spheres of human activity and politics was no exception. 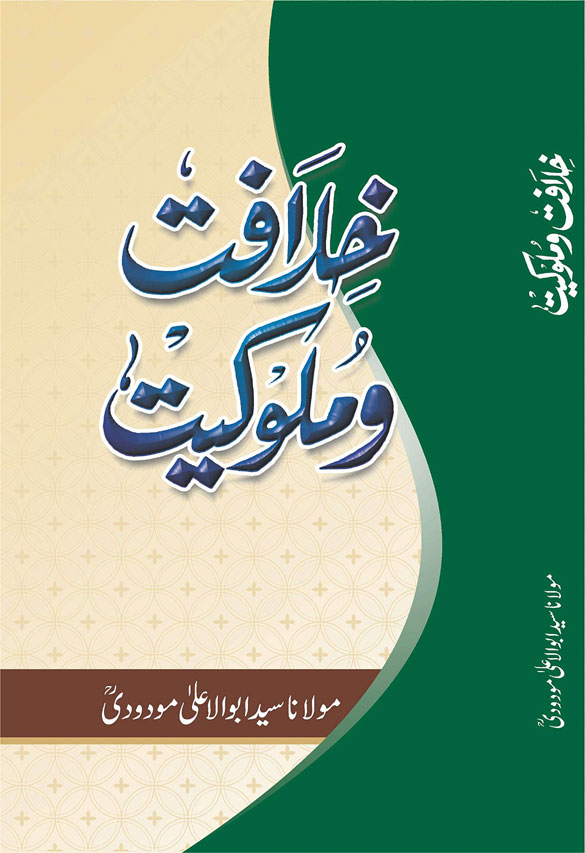 During the second half of Prophet’s Mission in Medina and later on completed by the four righteous Caliphs, the mankind witnessed a pious, accountable and transparent system of politics i.e. Caliphate which compelled even the hostile historian like Arnold J Toynbee to state that “Muhammad (pbuh) failed as a Prophet but succeeded as a Politician” though politics was only an aspect of Prophet’s illustrious life. His legacy later presented before the world a unique, practicable and dynamic system of governance as an ideal which was not utopian. It was a Just, humane, tolerant and unique system of politics while politics still is demeaned as a Dirty Game of wicked minds.

What went wrong with this Just and Ideal system of Politics and Governance i.e Caliphate and why it could not sustain for a long time is the subject matter of the present book under review by the renowned scholar, thinker and prolific writer on Islam Maulana Abul Ala Maududi. The title as is self-evident traces the causes of retrograding Caliphate into monarchy and describes the various reasons responsible for this phenomena, the stages through which monarchy made a comeback, the ill effects of tussle between the forces of monarchy and caliphate which ultimately gave birth to various new deviant sects within Muslims, the bloodshed which followed the tussle, the attempts to revive the caliphate to its pristine purity and their failure.  The individual attempts at revival of Imam Abu Hanifa and his student Imam Abu Yusuf to consolidate and put pace to the further deteriorating conditions of Muslim masses and bind them once again as Ummah were not successful. The book ends with a chapter rebutting the queries and criticism raised by opponents of Maududi’s views as presented in the book.

Maududi opened up serious debate and gave birth to big controversy which still has not reached its logical conclusion.  Through a meticulous compilation of historical data he has unleashed the fact which actually expounds the myth that Companions of Prophet(Suhaba) being infallible, though Maududi never suspects the intentions of the Suhaba, still he does not let them go free as he defends vociferously his arguments by legitimate justifications and historical data that they committed mistakes which ultimately led to the doom of caliphate whose decline initiated during the tenure of third Caliph Usman(RA) by his meek nature and loose administration whose undue advantage was taken by his selfish relatives resulting in the growing resentment among the masses.

All this resentment at last erupted into violence first leading to the martyrdom of Usman (RA), then Ali (RA) and later his son Hussain(RA) at the battle of Karbala and many others like Abdullah bin Zubair(RA) who all attempted to put the wheels of Caliphate back on its rails but all in vain. During this whole period of chaos and confusion thousands of Suhaba were killed or brutally massacred and numerous others suffered persecution at the hands of tyrant rulers.

This period is first among the dark periods of Muslims after Prophet(SAW) hence most muslim scholars try to keep these events in oblivion, but Maududi opened the Pandora’s Box hence was the butt of ridicule, but he did the pioneering job best suited for him as a scholar to lay threadbare all the events and shortcomings within the Muslims thus calling them towards introspection.

Maulana Maududi in chapter six of the book while debating about the initiation of religious sectarianism among Muslims acknowledges that not only political situation was responsible for the growth of these sects but fails to enumerate the other factors responsible for this malice. These were very cruel times: there were relentless persecutions and ruthless blood shedding in the Muslim world for the Umayyad hegemony.

The growth of Mutazalism was also a result of the translation of Greek philosophy books into Arabic which paved way for the new discussions and growth of sects like mutazalism. Maulana is factual enough while acknowledging the contribution of two stalwarts of Muslim Jurisprudence who laid the foundation of Hanafi Madhab (School of thought) but seems to ignore about the contributions made by the Sufis who revitalized and rekindled the thirst and desire among the masses to follow, understand and spread Islamic teachings. Sufis were the persons who after witnessing the failure of revival attempts of Khilafa focused and concentrated only on the religious, humane, pluralistic and universal teachings of Islam which laid the strong foundation of Muslim civilization and paved way for millions to enter the fold of Islam, which politics had reduced to a mere cult where attacks and counter attacks had reduced Muslims to penury and there were grave implications that the Muslims would retrograde to apostasy, but the strenuous, selfless and dedicated efforts of Sufis turned the hostile tide in their favor.

It must be kept in mind that Sufis were unlike monastics of Christianity or monks of Buddhism unconcerned with the mundane day to day affairs but they were abreast with the developments around as well as socially engaged and missed no opportunity to set the political system on the right track, though they tried to remain aloof from the echelons of power.

Maududi very explicitly and lucidly describes all the details vividly but fails to raise one brutally honest question for which he formed Jamaat e Islami(JeI) in 1941 and which he defended and fought for all his life i.e. Creation of an Islamic State. “If the Suhaba Trained and benefited by the companionship, leadership, teaching and Tazkiya of Prophet(SAW) could not sustain Caliphate and stop it from derailing into monarchy, how can Maulana Maududi or his JeI first train, then establish and after that sustain a similar Caliphate read Islamic State in Maududi’s terms?”.

Experience, efforts and events till now have proved that the utopian dream of Maulana Maududi has not yet been realized and still no apparent reasons make one believe and hopeful about the establishment of Islamic state. Altogether the book is an adorable read and opens new vistas to think on the less tread path and is indispensable for any student of Muslim Politics or a serious reader who wants to know what went wrong with System of Caliphate.