The Vicious Cycle of Uncontrolled Violence Has Destroyed Syria

2.    The regime is depicting no seriousness for a political settlement but it uses only the language of power against its political opponents.

4.    In Syria the tussle between the protagonists of Arab spring and status quo still continues at the heavy cost of millions of lives. 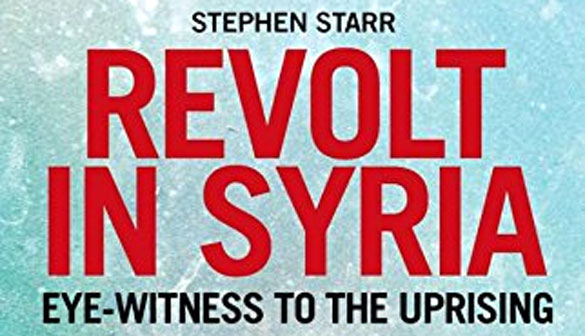 Revolt in Syria: Eye-Witness to the Uprising

The phenomena of what is known as Arab Spring started in Tunisia in 2011. Since then it has spread over most of the Arab world, with dictatorships and monarchies falling apart under the mass peaceful protests of people. The Arab Spring received an arousing welcome in many Arab countries and it spread quickly to others. Wherever the Arab Spring bloomed it had varied influences, impacts and ramifications. The spring resulted in somewhat peaceful transformation of power in Tunisia; the change of guards was good in Egypt too. Libya after some reluctance and bloodshed ousted Colonel Gadhafi.

The dynamics of the Arab spring are quite different in each place and it is difficult to predict the future of these nations that came under the sway of Arab Spring. But one fact must be acknowledged that Arab Spring didn’t bring any permanent revolutionary change in its wake as most of the previous political and social institutions remained untouched. A number of reasons can be cited for the fragility of this phenomenon.

The fruits of the Arab spring were temporary and in some places it soon lurked back to Arab winter. The fate of Syria in the wake of Arab spring that has retrograded to Arab Winter there is the best testimony of this fact. In Syria the tussle between the protagonists of Arab spring and status quo still continues at the heavy cost of millions of lives.

The book under review by the freelance Irish journalist Stephan Starr documents the arrival of Arab Spring in Syria, the response of Syrians to it and how this phenomenon had a deep irreversible impact on their lives that were thrown into disruption. In his Prologue, Starr vividly describes the regime of Bashar al Assad as, “The regime has no interest in peace, only in keeping power. As with past plans, it will use this chapter to carry out further crackdowns. Thus far it has successfully faced down the international community which once proposed UN resolutions calling for Assad to step down. It routed the rebels in Baba Amr, Idlib and elsewhere around the country in February and March 2012. On a certain level, it has never felt stronger and more convinced it can win than it does in April 2012. But perhaps this arrogance will lead to its downfall” (P-xi).

Despite Starr’s surmise he lambasts the apathy of world and disunity in Syrian opposition. “Neither the political or armed opposition have particularly endeared themselves to the millions of Syrians sitting on the fence or to elements of the international community keen to stop the regime’s violence” (P-x). Starr also describes his relation with Syria and how the circumstances later on forced him to leave. He ends the Prologue with a surmise about the future of Syria in these words, “In the long term the regime simply cannot win this fight. Too many have suffered too much. But nor can the opposition win outright in the near future. Syria seems set for months and perhaps years of economic stagnation, brutal repression and divisions” (P-xii).

Besides the Introduction the book contains eight chapters each dealing with a different facet of the resistance, politics, protests and public life in Syria. Starr vividly describes the beginning of the waves of protests against Alawite regime headed by Bashar al Assad lead by masses who were inspired by the successful downfall of the regimes headed by monarchs and dictators in their neighbourhood.

Starr very well brings forth the denial mode of the State and its authorities who were labelling these indigenous protests as being fuelled by outsiders and trouble makers who were enemies of Syria. The Alawite minority who rule and have major stakes in Syria were claiming that these protests were held at the behest of Saudi Arabia in league with U.S. The State organized parallel demonstrations in favor of regime of Bashar Al Assad and then telecasted the same giving them coverage through the state owned media outlets, so as to prevail on the other Syrians and demonstrate that everything was fine with the regime. The propaganda and Media war thus began among the supporters and opposition of the regime. The use of Social media like Facebook, Twitter and video sharing website You Tube was made to support or oppose the regime.

Journalists who tried to be factual and file reports based on grassroots realities were questioned and made to toe the line of the regime, helping to drive its propaganda machine. The foreign journalists who refused to do the same were deported. It is an interesting story that Starr describes as to how he survived in such a hostile environment without being deported or assassinated. Although he acknowledges the fact that he also missed to capture various issues and things due to this mode of survival attitude. Also the native papers had either to miss some issues or shut down due to lack of the advertisements. Only those survived that followed the regime’s dictums. Starr being a person related to media lucidly describes the impact of the tussle in Syria on media.

The demonstrations and protests were held on every other day against the regime, and in some cases they were followed by a pro regime demonstration too. The demonstrations and protests had their own peculiar characteristics too. Starr provides an insight to the same, as to how some of the protests got organized by the activists and how they were repressed by the State. He also describes the personal lives and political outlook of some of these protestors. He also makes the reader aware as to how the major demonstrations were confined to the outskirts and rural areas as Damascus being mostly inhabited by business community who didn’t want to rise against Bashar as that would hit their economic interests. He describes the impact of the situation on the business. Starr describes the reaction of rich and poor to the new situation. He describes how the poor taxi drivers were used by the regime as spies.

He then tries to analyse the relationship between demographic, ethnic, religious, regional and educational levels of masses viz a viz the protests. He finds that majority of the Syrian population being below thirty years of age want the change of regime but there are others who too want change but are afraid to pay the price for change because they think that civil war will accompany the change. The threat of the civil war lurks large in Syria as it is composed of various ethnicities like Kurds, Druze and others. Also the sectarian and religious division is strong too. The Syrian Christian minority is against any kind of change so are the Alawite sect. Most of the population of Syria comprises of Muslims, but majority of them belong to the Sunni sect who want the Shia Alawite regime to be replaced by a Sunni majority one. Thus these contending parties are bound to clash and this clash has opted for violence to achieve its aims and goals.

The State has also adopted the solitary option of Iron Fist policy to suppress these indigenous protests and they are in no way serious about conceding to the demands of the people by including permanent reforms in the working of the State through incorporating changes. Despite the fact that there are varied views about whether the regime should stay or go, but reforms that lead to better political participation and equal distribution of economic resources will surely put Syria on a path of progress instead of civil war. But the regime is depicting no seriousness for a political settlement but it uses only the language of power against its political opponents. The use of Shabiha (ghost) gangs, illegal irregular forces, Non state actors by the State to torture, kidnap and kill its opponents and then put the blame on Free Syrian army is only contributing to the escalation the violence in Syria.

Starr very well observes, “There is little doubt that those in power- the ministers, the presidential advisers, even the Mukhabarat on the street-are little more than a cabal of gangsters who through pure guile and willingness to create fear, installed brutality over Syria. They are not well read. They did not attend college. Their mindset of statesmanship is non-existent. They will fight to the last man on the premise that those coming to take their places (Sunni, simply because Syria has a predominately Sunni population) want to kill them for being Alawites. The notion that the Sunnis were coming to take over because some Alawites have used/misused their power was never a reality for them. They will not negotiate because the concept is alien to them in their everyday lives, never mind in the game that is international politics” (P-206). Thus due to this ‘only me’ attitude the conflict in Syria will continue without any positive breakthrough.

The meticulous articulation and academic worth of the book doesn’t get diminished despite its flaw of chronicling the events till June 2012 only. This book has the privilege of being the primary source and first-hand account of the events that shaped/are shaping the contemporary history of Syria. This book traces and tracks the multi-dimensional impact of revolt and conflict in Syria has on various fields of polity, economy, ethnicity, education and public life. It is an important contribution to the studies of Arab spring in general and Syria in particular. No person having interest in contemporary Arab can afford to miss this book. It remains a recommended read on contemporary Syria and its worth in the coming years would increase with further citations and references. A powerful and welcome read indeed.