1.    The culture of impunity that state of Israel enjoys that is responsible for the failure of all peace process initiatives.

2.    The Nakba has become a permanent condition felt by one generation after another.

3.    The wars are also employed to displace millions of Palestinians like 1967 Arab Israel war, and even the sacred city of Jerusalem has been colonized. 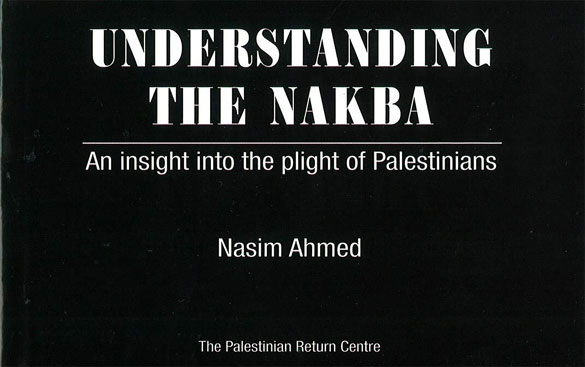 Understanding the Nakba: An Insight into the plight of Palestinians

The Palestinian issue is a legacy of the British colonialism. In the contemporary history it is one of the oldest running conflicts and is a testimony of the failure of United Nations as an international body whose aim is to resolve the political disputes and conflicts. The Palestinian conflict continues to rage and devour on the blood of innocents while the big powers are supporting the Israel at the expense of Palestinian natives. The initiation of this conflict goes back to what Palestinians remember and commemorate every year as Nakba (the Day of catastrophe) i.e. 15th May, 1948 when the state of Israel was created after displacing and exodus of the Palestinians from their lands. The book under review tries to revisit the Nakba tragedy and depicts how Nakba still is a reality for Palestinians and how they relive and go through the Nakbas all their lives. Through the lens of Nakba the young author Nasim Ahmed tries to revisit, relook and rethink about the Nakba and the place it holds in the lives, struggle, resistance and future of the Palestinians.

In her Foreword to the book, Rachael M Rudolph, Managing Editor, Encompassing Crescent, while depicting the essence of Nakba very well states that “The Nakba, however, is not just one event that has shaped the lives of so many. It is an ongoing event that transcends time and space and encompasses every breath taken, every life lost, and every moment of being. The Nakba is not just about 1948, 1967 or other periods where there were campaigns of expulsion, ethnic cleansing, murder, occupation and oppression of Palestinians. Rather, it is about the injustice that has plagued humanity for decades. This injustice has been preserved by an international system dominated for far too long by states who are representative of the political and economic elites and not those-the ordinary man, women and child-they are supposed to represent. The voice of voiceless remains silent in the policy making apparatus of a system, of a community that is supposed to stand for justice and defend the rights of the oppressed from their oppressors, but instead upholds the rights of the oppressor”.

In his Introduction, Nasim Ahmed while deliberating about the relationship of Nakba with Palestinians writes, “No single word can echo the suffering felt by individual Palestinians whose life is overshadowed by the Nakba. The Nakba has become a permanent condition felt by one generation after another. After the first mass expulsion, Palestinians endured the most sophisticated engineering of their destruction as a nation and a people. They have been made refugees and forced to endure ethnic cleansing, occupation, violent expulsion and wars. Palestinians suffer injustices at the hands of an apartheid regime which has arrested their lives and destiny” (P-12). The book is divided in three parts and each part deals with different aspect and impact of Nakba.

Nasim goes to the genesis of Nakba’s history and tries to argue that understanding the Zionist component and involvement is must in understanding the phenomena of Nakba. He then goes on to relate the various tools that have been utilized to manufacture truth that is one of the basic purposes of writing history. He then relates the media bias while reporting Palestine, and depicts how Dalet Plan was implemented as a master plan to rid Palestine of its indigenous population. Nasim acknowledges the fact that none can stay neutral in a conflict like that of Palestine, but the myths invented need to be answered and lies need to be rebutted with irrevocable proofs. The myths like the Nakba was a result of the rejection of U.N partition plan by the Palestinians, or there were no Palestinians and those who were living in Palestine were all recent migrants, hence it was not an exodus of an indigenous population but further migration of a nomadic people. But Nasim is happy that new scholarship on Palestine is challenging these myths and doctored history.

Nasim while highlighting the differences between cultural, religious and political Zionists writes, “Cultural Zionists wished to resolve the ‘problem of Judaism in the modern world and not the ‘problem of the Jews’. In their view, the survival of Judaism and the Jewish people was threatened less by anti-Semitism than by an increasing secular civilization that rendered them anachronisms. The real danger was not the Gentiles icy rejection but rather, their seductive embrace” (P-43-44).

Nasim then goes on to analyze how the population transfer and exodus of Palestinians is used as a strategy to displace Palestinians and make way for the new migrant Jews. The wars are also employed to displace millions of Palestinians like 1967 Arab Israel war, and even the sacred city of Jerusalem has been colonized. The Palestinians are seen as a demographic problem that needs to be removed from their native place. Even the Israel’s legal structure reinforces and encourages the expulsion of Palestinians. By the way Israel has no written constitution. Nasim writes, “Unlike Afghanistan or any other conflict, the on going displacement of Palestinian refugees is not a by product of war” (P-49). This statement can be agreed and both disagreed, unlike Afghanistan which was occupied in the aftermath of 9/11 attacks Palestine is under occupation since 1948 and war and military power is still used to displace the Palestinians and deprive them of their homeland.

The various fundamental features of Nakba has been delineated too, that includes the permanent plight of the Palestinian refugees, Israel’s undermining the United Nations recommendations and resolutions is a clear depiction of its defying the organization that Israel owes its birth to. The U.S support of Israel and its policy of using veto against any such Security Council resolution that goes against the interests of Israel. The culture of impunity that state of Israel enjoys that is responsible for the failure of all peace process initiatives. Despite the international consensus on the illegality of the Israel’s annexations, it still doesn’t behave in a civilized and democratic manner, though it brags and boasts about being the solitary democracy in the whole of Middle East. It still employs high handed tactics and terrorist measures while dealing with the Palestinians.

Overall the book is a very nice read for anyone interested in Palestine issue and the role of Nakba as the author very well conceptualizes the Nakba, that isn’t too academic nor too easy but one can understand the book quite well if one has preliminary knowledge of politics and Palestine issue. The author needs to be congratulated for this endeavor. It is a good addition to the Palestinian studies.