Mystics Expressed Their Experience of Islam Mostly Through Verses

Kashmir has been a bastion of mystics. As usual mystics expressed their experience of Islam mostly through verses. The poetry of most of these local mystics is available in vernacular Kashmiri language. With each passing day the scope and readership of vernacular languages is dwindling. The state cultural academy and other literary groups are helping preserve this treasure trove, but their efforts have yielded very few positive results. New generation of readers are not interested in reading mystical poetry. It is pertinent to mention that government has introduced Kashmiri language as a subject to be taught compulsorily in the schools. 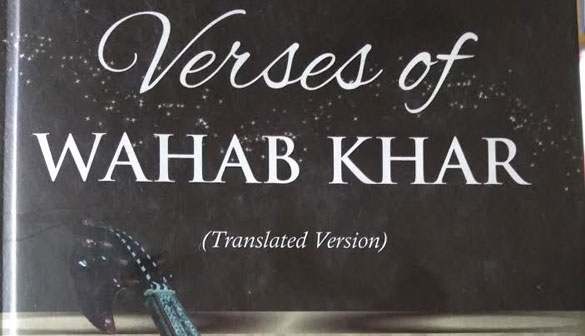 Translated by Mushtaque B Barq

To bridge this divide, versatile writer, translator and poet Mushtaque B Barq, has come out with the translation of selected verses of Wahab Khar, a very famous local mystic. Wahab Khar’s mystical poems have been sung by many local singers and his shrine in Shaar area is thronged by thousands of people every year. In his Foreword Ayaz Rasool Nazki comments on the relationship of poetry and mystic experience as follows, “Poetry in general is the effort at externalizing an internal experience and language is the best available tool to express. Mystic experience is a complicated affair and mystics live in another world of consciousness which has its own day and night cycles, its own seasons and its own ways of life. Extrapolating that world to our world of sensibilities is a very difficult task.” (P-12)

While commenting on the beauty of Barq’s translation, Nazki observes, “The beauty of the Mushtaque Barq translations is its simple approach. He doesn’t take recourse to verbosity and tries his best to remain around the basic tenant of the verse. He has employed common day to day words to make the understanding of the meanings very easy. The translations are provided with an exhaustive glossary and that makes it much easier to comprehend the meanings of alien words.” (P-13)

The metaphor of flames and raging fire is usually used to describe the origin and experience of Love. It is essential to maintain here that when mystics talk about love and beloved, they are mentioning Allah, Prophet Muhammad (pbuh) or their Rahbar (Mentor or Guide). Rahbar is the spiritual guide who inducts the disciple in the sufi order.

You put me on flames

Do seek out Wahab Khar

“The one who admire four caliphs

Shall be escort by Him

What attempt Iblis did execute

A word led him astray

His pride put him to flames

Came into bloom my gardens then Oh! Love

Fond of Thee is Mansoor

The inspiration from Quran and Shariah is quite visible too

(He) is not born from anything

He has no offspring

All in attendance, Haqiqat

Also, mysticism remains shrouded in mystery, so Wahab Khar cautions Sufi mystics not to reveal everything that they have experienced

“O The friend of Wahab Khar!

Being open is but forbidden

The story of Adam and Satan is recounted in the verses too, so is the fact about the Light of Muhammad (pbuh).

“The Light of Mohammad (saw) is the reflection of Lord

From that Light the worlds emerged

From that Light messengers become known

The spiritual journey of Meraj holds a strong attraction for the mystics, as is evident from these verses

“Message to Nabi from above came

Came then to public with code of conduct

Behind the veil, unhook them

See the cheerful in person

Being in total isolation

The tussle between reason and emotion, head and heart and which among them has the prominence is a theme that has been engaged by most mystics over the centuries. The debate still seems unresolved.

My mentor put in plain words all

All four are revealed by Wahab Khar

The translation of the selected verses is indeed very apt and insightful. Barq has done what our academies and university professors have failed to accomplish. It is true that translating the complete works of Wahab Khar will need more time, energy and resources; still this attempt is no small feat. However, many words are missing in the Glossary. Instead of Glossary the difficult terms could have been mentioned as footnotes. Khrew or Shar are names of places but Barq has not mentioned them (P-93) thus confusing the reader, Hazrat e Sultan (P-95) refers to Sheikh Hamza Makhdoom and Four companions (P-97) are the four Caliphs. If they would have been explained, certainly it would have added to the merit of the work. I hope in the next edition such issues will not be overlooked.

Both the translator and publisher need to be complimented and congratulated for making the mystic voices of Kashmir available to the general readers. The cheaper paperback edition of the book needs to be brought out so that the work gains a wider readership.