Islamic Movement as a Global Phenomenon

1.    Islamism has witnessed an evolution, change and has now transformed into Post Islamism in most Muslim countries.

2.    Islamist movements have adopted the western institutions of polity including participation of elections and democratic methods for regime change.

3.    Scholars and ideologues of Islamism are trying to understand the reasons for the failure of the project Islamism. 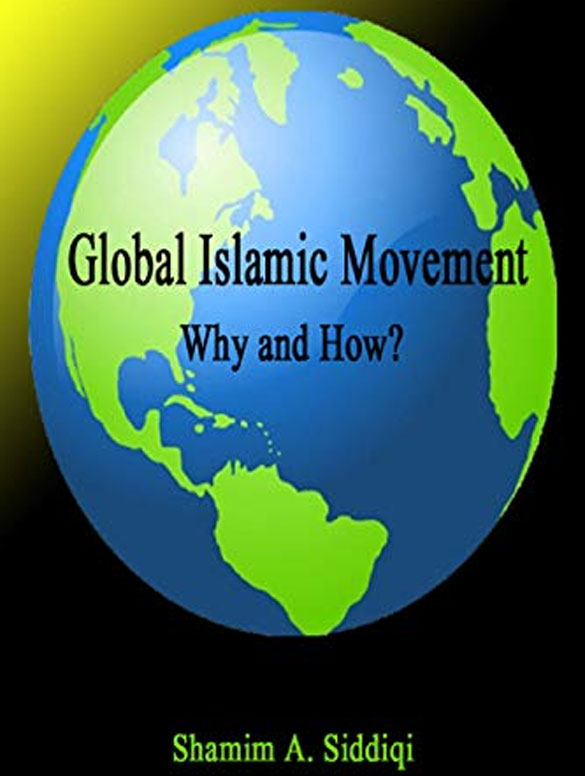 Global Islamic Movement: Why and How?

By Shamim A. Siddiqi

Brooklyn, United States of America:  The Forum for Islamic Work, 2014

Islamic revivalist movements are a factual reality of the Muslim world. Most of these revivalist movements concentrated their efforts on establishing an Islamic state, through a process of what academically is known as Islamism. Islamism has witnessed an evolution, change and has now transformed into Post Islamism in most Muslim countries. Still in many regions and societies, scholars and ideologues of Islamism are still trying to understand the reasons for the failure of the project Islamism whose highest zenith was the establishment of an Islamic state. The present book under review tries to understand these causes, by an Islamist ideologue and activist Shamim A Siddiqi. In his Foreword of the book M. Rafat, Editor of Zindagi e Nau, an Urdu Jamaat e Islami India publication observes, “The book Global Islamic Movement is indeed a thought provoking book. All those committed to betterment of humanity should take note of the author’s message” (P-X). In his Preface, Shamim appears lamenting about the pessimistic outcome of revivalist movements, “Now I feel, unfortunately, that all the movements are simply bogged down in solving just the community problems along with their ideological pursuit to change the system of the day and establish the requisite Islamic state somewhere in the Muslim land. However, what I see is that our movements could not succeed anywhere in spite of their most sincere painstaking efforts. Ummah stands nowhere except in a very devastated condition at all counts” (P-XVI). The book is an attempt to understand the reasons for the devastation and trying to find remedy for these ailments of Ummah.

Shamim is of the opinion that every system whether it be democratic, socialist, communistic or dictatorial has failed to resolve the problems facing humanity. He then writes about the need for Muslims to produce an alternative to capitalist system that according to Shamim is on decline, “Now capitalism is at the verge of its death too. Muslims must produce a model Islamic State as an alternate system of life for many capitalistic democratic societies of this world. It is an open challenge to our Islamic movements around the world to produce its model lest we miss the bus again” (P-17). Shamim time and again invites muslims to introspect and set their own house in order and then call others towards the pristine message of Islam. He is trying to make the reader understand the reasons about the failure of the Islamist movements to establish an Islamic state. He is critical of the fact that Arab spring that offered a ray of hope for Islamist movements turned out to be a tragic illusion as the Arab kingdoms paid money to the dictator Abdul Fatah al Sisi to butcher the cadres of Islamist movement of Muslim Brotherhood. Despite such brutality against the Islamist movements, Shamim does not advocate any clandestine or violent activity as a measure for overthrowing the dictatorial regimes but pitches for a democratic solution, as according to him, “Creating the urge for democratic process in Muslim masses will help in changing the system in due course of time, say a decade or so” (P-30)

Shamim further writes about Islamic system of polity, economy and social order. The differences between rich and poor nations, West and its project of neo colonization of Muslim lands are debated too. Further the opposition of Islamist movements is evident from the U.S policies, monarchies and dictatorial regimes who rule Muslim lands in consonance with U.S and other allied powers, “Nowhere Islam is allowed to emerge as a “Political Entity” and unfortunately, Uncle Sam, the champion of democratic values, is playing its leading role. It is openly opposing tooth and nail that nowhere the Islamic forces and the Islamic movements are allowed to succeed, even through the democratic process. Everywhere their efforts are torpedoed, somewhere directly and somewhere by their local “agents” through his tactic approval. This game plan is quite visible if one studies minutely what is going on with the Islamic movements in Bangladesh, in Afghanistan, in Egypt, in Pakistan, in Tunisia, in Libya and the ongoing civil war in Syria, Iraq and the nascent efforts of ISIS in the Arab world in the heart of Middle East. These secular forces have intentionally sabotaged the blooming emergence of “Arab Spring” and devastated the innocent blood of “Mohammad Bu Azizi” of Tunisia, the “unintentional” founder of the epoch making awakening in North Africa. The secular world and its “Head” have gone amuck. They are blindly opposing Islam which is now the only boon and benediction for them when all secular systems have failed and the capitalistic democracy is counting its days lying on its death bed under “Oxygen Tent” for long. The entire secular world is playing the role of the “Dog in the manger” as elaborated earlier” (P-90).

These are the ground realities, though it is also a fact that Islamist movements have adopted the western institutions of polity including participation of elections and democratic methods for regime change, still the mandate of people is not being respected if it is in favor of Islamist parties. This book is certainly a good read as it points out the fact that there indeed is a process of introspection among the Islamiat movements and despite repression they have not treaded the path of violence. Further Shamim is critical of the fact that Muslims are not responding to the duty of Dawah, calling people towards Allah. This book is a nice read, but the font and uneven highlighting of passages make it a cumbersome for the reader to enjoy.