Islamic Concept of Moderation in the light of Peace, Co-Existence and Interfaith Relations

Islam is being labelled as extremist religion in our contemporary times. Muslims are being described as fundamentalist, who are always ready for violence particularly if something hurts their religious sentiments. These ‘sentiments’ are variegated; so many times one group of Muslims feels hurt by a different sect of Muslims. Hence internecine tussles are not uncommon among Muslims. Despite the freedom of religion being accepted as a fundamental right, the tolerance about the plurality of religious interpretations has witnessed a decline. 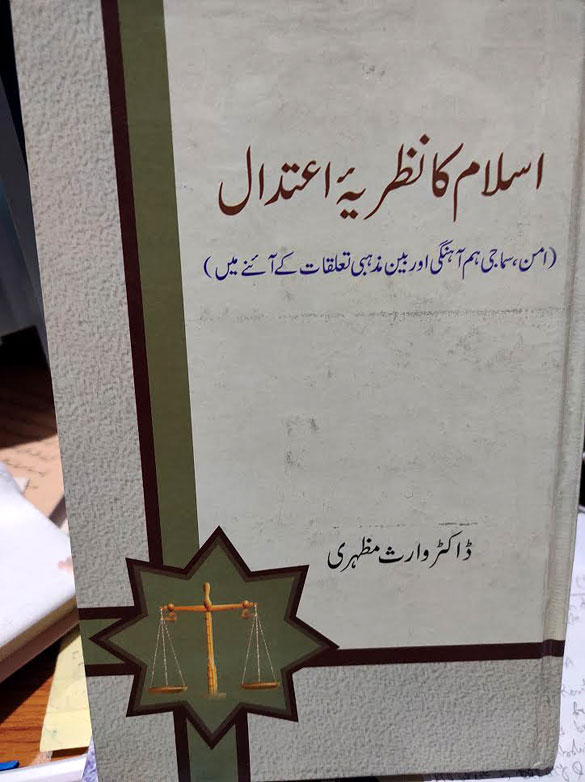 To question a certain interpretation, aspect or a theologian has become akin to raising doubts about religion and God itself. God and religion are beyond question for most believers, something that Islam desists from but masses have been given to understand this liberating value from Islam is missing, so they are ready to act violently against the dissenters. This un-Islamic trend has become mainstream in most muslim countries and communities, hence even progressive scholars of Islam are forced to pay for their interpretations by various measures including silence, exile or imprisonment.

Dr Waris Mazhari is a seasoned scholar, theologian and academic of Islam who has been trained as a traditional madrasa scholar and through his personal efforts has been able to study in the mainstream university educational system. Currently he is teaching at Jamia Hamdard University, and has written various tomes about the need for reforms in madrasas and other contemporary issues facing Muslims. This new book is a collection of his various academic conference papers and research articles that bring forth his efforts for new interpretation and Ijtihad.

Dr Mazhari in his papers describes Islam as a religion of tolerance and moderation. So exaggeration (Ghulu) in religion creates imbalance in religious affairs that renders believers to emphasize for minute details while forgoing and forgetting big and important ones. This emphasis on small details leads to fundamentalism, sectarian extremism and indulging in Takfir (labelling Muslims as Kafir/infidels). So the Takfir is based on intolerance towards varied interpretation of texts. Dr Mazhari is a strong votary for Ijtihaad and Dialogue. He believes that the goal of unity among different schools of thought will be achieved through Dialogue only. But he laments at the fact that different sects and schools of thought among Muslims in India just unite for political and identity issues not on religious and theological ones.

The revolutionary interpretation of Islam has become mainstream and popular in our contemporary era. But Dr Mazhari very well points out that there is no word for Inqilab (revolution) in the Holy Quran but only Islah (reformation) has been reiterated. So what Islam really aims at is purification of the soul from the baser animal instincts a term holistically defined as Tazkiye Nafs, instead of focusing on collectivity of humans and masses. The misunderstood term of Jihad has been wrongly constructed to mean fighting in physical terms whereas in reality it means fighting against the evils of human nature. Its contours also encompass stopping vices and evil particularly those being promoted by so called Islamic groups. Further Jihad in the terms of Qital (killing and be ready to embrace death for a lofty cause/ideal) needs requisite strength, and given our circumstances has been rendered to defensive mode only. Also the aim of Islam is not to gain political supremacy over others or strike terror in the hearts of unbelievers so suicide bombing is to be abhorred too.

The relations between Hindus and Muslims in India is still being constructed as one between a conqueror and conquered that has resulted in insurmountable obstacles. The miss-constructed efforts for Islamic revivalism that includes criticism of values like democracy and secularism even boycotting these institutions by fringe elements among Muslims has resulted in Hindu revivalism and communalization of spaces. It has further given birth to stereotypes and misconception about each other. The participation in Hindu festivals of Muslims is an old tradition and that needs to be celebrated as Islam does stands against Shirk (associating partners with Allah) not abhorrent towards maintaining social relations with Non-Muslims. The participation helps in bridging the divide between Muslims and non-Muslims. Also madrasas can play an important part in this Hindu-Muslim dialogue.

The perception of Muslims about West is flawed and stereotypical and vice versa. There is xenophobia prevalent among west and Muslims, so misconceptions about each other galore their interactions. West although is full of contradictions but they have learnt to deal and tolerate them. This tolerance was a value among Muslims too as there was no Takfir against Khawarij despite their subversive role in the caliphate of Ali.

Currently this tolerance is absent even in Muslim madrasas and universities where freedom of speech and criticism is absent that has led to stagnancy in creative output and Ijtihad in the Muslim world. Badeuzzaman Said Nursi had progressive and pragmatic views about West and Dr Mazhari engages with these views in a paper.  Peace as a value and aspect of life was permanent in Prophetic scheme of things whereas fighting was exceptional. Tolerance towards non-Muslims and their religious spaces was factual in the Muslim history unlike what Taliban did in case of statues of Bamiyan Buddha.

The book is an important noteworthy addition that engages with the contemporary questions and challenges in the light of Islam using the paradigm of Ijtihad. The relevance of this work qualifies it to be translated in other languages too particularly in English for a wider dissemination. Dr Waris needs to be complimented for this important work and we hope that in future too he will continue to write more on these different issues that are baffling muslims. His writings depict that Islamic teachings still provide an answer and alternative to the current challenges given that the scholar and theologian is ready to indulge in Ijtihaad.