Excavate the Old and Examine the Modern: Elif Shafak – Part 1 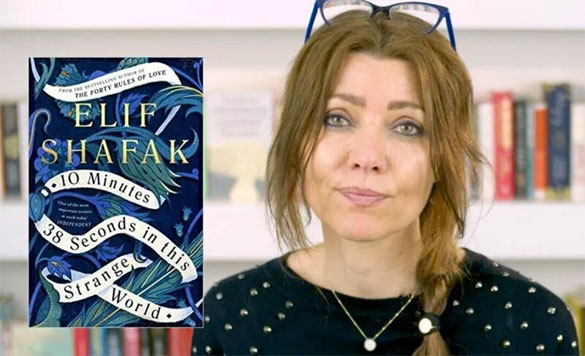 Of literature, fiction is the most complex genre. Writing novel with meaning, substance and purpose is quite demanding. Novel mirrors society, besides being a critique of society, authentic and articulate, call it a life–force to transform accumulated insanities to sanity, transform humans from filth and dross to flowery fragrance and beauty – humans who are all different rolling between sin and virtue. Novel is such a stream of art. Said George Eliot: “If art does not enlarge men’s sympathies, it does nothing morally”. A novelist is according to Wola Salyinka (Nigerian Nobel laureate 1986) at  a time a philosopher, a historian, a psychologist.

Elif Shafak, the Turkish woman novelist, a prolific writer, a wonderful storyteller, qualifies a class novelist whose novels are read, and will continue be read, worldwide.  Her novels are basically stories, mirror-copies from life around – in Turkey, America, Europe, Middle East –the canvas of her story land. She draws, where she claims to belong. She is a Queen Empress of a vast Empire. Her novels go well touching history. She does not philosophize, not her job, but her philosophical viewpoint obliquely manifests in her narratives. She has her preferences – Plato, Descartes, Spinoza, Rumi, Democracy, Liberalism, Feminism, anti-Sexism, anti-Racism, Pacifism. Her in-depth psychological study of characters she creates is remarkable. But she is mainly concerned with what she herself is – a woman – a walking chaos or a rebel. Plight of woman is historical. Shakespeare disposed her off: “Frailty! Thy name is woman.” Elif Shafak, as voice to the silent, exposes this plight of the fair sex in the perspective of long held clichés, taboos and fixates of Tradition. Putting under her kaleidoscope hypocrisies, injustices, intolerance, superstitions, everything ugly and horrible in the social settings of patriarchal societies in particular of the Muslim World. Also, the prejudices harboured by the so called progressive, developed societies of the West (Islam and Islamophobia) and the unrealistic biased criticism of the western civilization by the eastern opinion makers, both unfair and deep down prejudiced.

The craft of a genuine novelist– art for the sake of life. Shafak is a vocal vociferous critic of religio–traditional–cultural–customary stereotypes. An iconoclast of sorts. “All fanatics have one thing in common. They live in the past. (Shafak). And: “what a toxic cocktail is ignorance and power”. Her novels: ‘The three daughters of Eve, The bastard of Istanbul, Honour, Forty rules of love, Ten minutes and eighteen seconds in this strange world, Architects Apprentice’. Of these I have read the first four. I intend to read all. She writes in English her novels. English being a language widely read and spoken and also rich in everything, even in translations. To Shafak words in English are tasty, broad–spectrum.

Here I am going to talk about ‘The forty rules of love.’ But let me passingly say that stoic professor Azur in ‘Three daughters of Eve’ and Asya in the Bastard of Istanbul and her dipsomaniac cartoonist are longer living characters in the subconscious. As for the ‘forty rules of love ‘it’s a brilliant exposition of Sufism. Trailblazer after John Bunyan’s Pilgrim’s Progress.

The Islamic lore is full of Sufi saints. It’s a rich tradition illuminating the essence of the religion of Islam. ‘Sufism is the security of the heart and the generosity of the soul.’ (Junaid) ‘Sufism is to possess nothing and to be possessed by nothing.’ ‘Sufism is morals.’  ‘Sufism is loving the beloved –the Eternal Beauty.’

In the Islamic discourse ‘Sufism’ is the word for ‘mysticism.’ Annemarie Schimmel writes in her classic work ‘Mystical dimensions of Islam’ that Muhammad (SAW) is the first link in the spiritual chain of Sufism. In her biography ‘Black Milk’ this is how Shafak, like Socrates saying,’ I am the citizen of the world,’ presents herself in sum:’ ‘I am a writer. I am a nomad. I am a cosmopolite. I am a lover of Sufism. I am a pacifist. I am a vegetarian. I am a woman, more or less in that order.’ Forty rules of love are her élan vital in that direction. Every universal writer-playwright, novelist, poet is a cosmopolitan, A lover, a visionary with a keener inside – looking eye. Equally a thinker, a scientist. True art is universal beyond time and space with its all-time fixed pursuits of Truth, Beauty and Goodness. Shafak –the thinker is a traveller on the path to Truth through a real human world.

As she sees it with her third eye its inner–most cross currents deep down in its secret repositories. Her outlook is Sufistic with a worldview and at the same time she is a social scientist. All art being in and out of society even so religion. Her tool of discovery, investigation and expression, the novel.

Her novels – What a panorama of stories from the dilemmas of humans across the continents! What a panoramic view across time and space, across history! An urbane-nomad writer with her beautiful descriptions of Bosporus, Thames, Euphrates, Istanbul, Oxford, Baghdad, Konya. She has a heart for colours, rain, flowers and music. Her favourite colour is black. Conflicting cultural issues highlighted of the major stratum of society in the Western and Eastern civilization, if civilization in a global world of satellite communication and technology could be dissected thus. But here they are, how trivial but volatile – headscarf in Turkey and miniskirt in Europe, Eastern terrorism/extremism and Western Islamophobia and materialism. Importantly that agent provocateur – the shattering word- the question. Every question not answered but raised, insinuatingly suggestive of answer. Question everything.  Religion, Society, politics, culture, love, History and questioned violently, brazenly. Excavate the old and examine the modern.  Pass through convulsions of rejection and acceptance. Read her and see what happens. You are forced to think the unthinkable, breaking the taboos and clichés. Shafak will administer shock therapies to cure illnesses in human mind having petrified since ages. For example, the Muslim Woman’s Manifesto (MWM) in The Three Daughters Of Eve.’ Read this: “I‘ve never understood people who are proud to be American, Arab or Russian–Christian, Jewish or Muslim. Why should I feel satisfaction with something I had no role in choosing? It is like saying I’m proud of being five foot nine. Or congratulating myself on my hooked nose. Genetic lottery.” Scintillating nuances, satire and wit make her novels so very interesting, extremely readable and enjoyable. Two points made here go deeper. Curse of ultra-nationalism and wearing religion on the sleeve-fanaticism. Going hammer and tongs on populism. Or going for Derida’s deconstruction.

The forty rules of love are formulated and promulgated in the context of evolving episodes in the story of Shams Tabrizi – Maulana Rumi becoming companions in Sufistic theosophy on one side and Ella the Jewish housewife relating herself to respect and admiration of A Z Zahra, who is a convert to Islam through Sufi influence on the other. The former is something celestial and the latter mundane. What is to be made out is how the celestial informs the mundane. Sufism is imaginatively brought under searchlight through these two sets of stories, but the first one of the main themes and the second is elucidative of that. Between these two parallel plots come in men and women, mortals between immortals, hell and heaven side by side. The main plot is laid out in the thirteenth century Baghdad and Konya. The second in Northampton and Amsterdam of the twenty first century. Rumi is Universal. Isn’t connecting people to distant lands and cultures one of the strengths of good literature? Shafak asks.

Love is the dominant power of Sufism.  Love hits everybody. Even a middle-aged wife Ella Rubinstein in Northampton.  Her husband David is a fallen soul, depraved of lust. It is a Jewish family with three siblings, the family is extraneously shadowed by one A Z Zahra who is a globe trotter but lives in Amsterdam, alone. Zahra’s wife is dead six years ago. Zahra (Aziz) a photographer by profession and serving the refugees in Amsterdam by interest.  Ella is a liberal, opinionated Democrat, a non-practicing Jew, not an atheist. Major problem consuming the world today, as in the past, was religion, she believed. A decent housewife bringing harmony to her family, even ignoring the waywardness of her husband. She is an educated woman with a University degree in English literature occasionally writing reviews on books for a publishing company. A Z Zahra is a beautiful character like Professor Azur.  Zahra (Aziz) is a Sufi enamoured of Shams of Tabriz, the legendary master of Sufism, Maulana Jalaluddin Rumi, the unsurpassable poet of Sufism. Not a novelist, Aziz has written a novel, his first and last calling it “Sweet Blasphemy”. Famous mystic saints of Islam Mansur Hallaj in Baghdad in 922 less known Aynul Qudat in Baghdad in 1132. Sarmad in Delhi were executed for blasphemy.  Aziz’s Sweet Blasphemy reaches Ella for review. Sweet Blasphemy is a tale of two superhuman souls – Shams and Rumi. Bewitched, Ella is pulled to Aziz, one in Northampton and the other in Amsterdam, entering into correspondence through e-mails thanks to intercontinental interconnectedness enlarging upon Shams- Rumi love and passion in the annals of mysticism.

Sweet Blasphemy brings the two loving hearts to meet each other in Boston where this secretive hidden interconnectedness develops into platonic love thanks to humanity of Aziz. (Thanks to the human heart by which we live. William words wroth). This platonic love, this ethereal phenomenon, sublime psychology, deep philosophy, something real something unreal, misty, pure and serene. And thus, detailing Sweet Blasphemy through reading of Ella, Shams of Tabriz and Rumi of Konya enter the storyland of the ‘forty rules of love’. Baghdad and Konya of mid thirteenth century, Northampton and Amsterdam of the twenty first century are the two-time frames in which the web of this novel is woven. The former is the ruthless time of Mongol invasion and of the crusades on the crescent of Islam and the latter the blood-soaked time of violence and terror. “This violence has generated a sense of insecurity and the fear of other. At times like these the need for love is greater than ever”, observes Shafak the Sufi.

We come across Shams Tabrizi in Baghdad in September 1243, resident in a Khanqah – a hospice for Sufi dervishes. Baba Zaman the patron Sufi of the hospice urges Shams to go to Konya on a mission to initiate Rumi onto the Sufi path. If a scholar and preacher of the stature of Rumi, a Minar of clericalism, enters the realm, it will illuminate, enlighten, and enlarge the realm beyond measure. It will be for the benefit of humankind as long as the sun shines, the world being too dry and arid with soulless religion. Shams even on his own cherished the idea, an encounter of a Divine Ministerial with a man of knowledge and learning.