The Trouble with France: The Largest Muslim Community in Europe Seethes on the Periphery 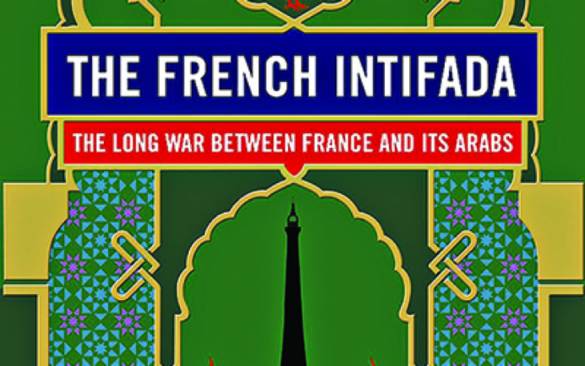 Andrew Hussey doesn’t give you the France of the guidebooks. His vision of the Republic extends far beyond the faded cafes of St ¬Germain-de-Prés, or warm summer nights in Provence. In Paris: The Secret History, he told the story of those excluded from mainstream accounts, “marginal and subversive elements” as he described them, “insurrectionists, vagabonds, immigrants, and sexual outsiders, criminals, whose experiences contradict and oppose official history”. Flecked with the slang of the streets and off-the-beaten-path wanderings, this was about as unofficial as history gets.

In his dark, disturbing new book, The French Intifada: The Long War Between France and Its Arabs, Hussey, dean of the University of London Institute in Paris, again ventures to parts of France that aren’t on any tourist itinerary – the impoverished, outlying areas of French cities known as the banlieues. More than one million immigrants reside in the banlieues around Paris, mostly from North and Sub-Saharan Africa, living in gritty housing estates. Not all banlieues are poor; but the perception remains in France that such places are rife with social problems.

“The banlieues is the very opposite of the bucolic suburban fantasy of the English imagination,” Hussey observes. “For most French people these days it means a threat, a very urban form of decay, a place of racial tensions and of deadly if not random violence.”

Here, Hussey argues, a grim struggle is unfolding, pitting France’s Muslim minority, Europe’s largest, against the French state. Combining history, travelogue and reportage, Hussey explores the long, tangled history of France’s colonial conquest of Algeria, Morocco and Tunisia in the 19th and 20th centuries and the fraught legacies of the period that the author says cast a shadow over contemporary France.

Many Frenchmen and women would prefer to forget France’s colonial record in the Maghreb, but Hussey argues that it is precisely this legacy that is at the heart of the troubles he outlines. It’s the phenomenon of “an old nation whose identity as the world capital of liberty, equality and fraternity is at every step challenged and confronted by antagonisms with its cultural opposite – the secular republic against the politics of its dispossessed colonial subjects … [T]he fact is that France itself is still under attack from the angry and dispossessed heirs of the French colonial project”.

Hussey’s book succeeds most when he is describing his personal encounters in the immigrant neighbourhoods of Paris, Lyons and environs.

On his French journeys, he tries to make sense of the riots that have wracked these areas in recent years. Even those who have decent jobs, like a young Cameroonian computer engineer he spends time with in Bagneux, south of Paris, despair over life in the banlieue: “If you live here, if you speak with a banlieusard accent, you are condemned as an outsider in Paris and in fact in all French cities. It is a double-exile – you are already an outsider because you are black or Arab. But then you are an outsider because you are banlieusard.” He talks with people in cafes, shops and sports centres. His findings are troubling, if not shocking. He finds rage and anger aimed at two primary targets: France and Jews. Hussey also journeys to Muslim immigrant districts within Paris. After the murder of the Rabbi Jonathan Sandler and six other people in Toulouse in 2012 – the killer was Mohammed Merah, a French national of Algerian descent – he ventures into the Barbes district. Hussey has a keen ear for street slang and an eye for telling details. Hip-hop and football are common passions among the men he meets. He watches “young Arab lads flogging trabendo – Algerian slang for contraband goods, mainly cigarettes but also wristwatches, dope and cheap alcohol. Young Arabs and Africans are slouching on benches, smoking weed, gossiping, leering at girls.”

Outside a mosque, he asks a group of young men, Algerians and Muslims, what they think of the Toulouse murders and Merah. “We hear stuff. France is our enemy,” one tells Hussey. “So why live here? France is easy. No one is hungry. In Algeria you could starve to death. And that’s because of the French.” As for Merah, “He was just a guy who wanted to fight the enemy. He wanted to be a soldier.”

What is to explain such simmering discontent? Hussey plunges into the colonial and postcolonial histories of the Maghreb looking for answers. These sections take up the bulk of the book. Drawn from secondary sources in French and English, these long chapters offer a more conventional account, speeding you through the history of French rule in Tunisia, Morocco and Algeria. Of these, it is Algeria, the biggest of the three Maghreb countries, that looms largest. The passage of Tunisia and Morocco into independence was one of relative peace; Algeria was a different case. Separation from France could never be easy – Algeria was governed as if it was part of France itself. (A young François Mitterrand declared: “Algeria is France. And who among you mesdames, messieurs, would not employ every means to preserve France?”) It had a large population of settlers known as pieds-noirs (“black-foot”) who were fiercely passionate about maintaining control. Algerian independence came at a steep price for both France and Algeria as a vicious war that pitted the National Liberation Front of Algeria against French forces raged from 1954 to 1962. Hussey’s account is luridly violent – it was a nightmarish struggle of beheadings, mutilations and mass killings on both sides. The French did indeed employ every means, including torture, to keep Algeria French. The struggle brought down the Fourth Republic and nearly caused a civil war within France.

Algeria’s post-independence years were troubled. Euphoria gave way to dismay and discontent in the 1970s and 1980s as Algeria’s rulers consolidated their regime. Social exclusion reigned; the ruling elites, known as le pouvoir (“the power”), “flaunted their wealth and privilege with their fast cars, fashionable clothes and international travel” while many Algerians merely scraped by. In the 1990s, a vicious struggle erupted as Islamist insurgents battled the Algerian government.

For Hussey, Algeria and France are locked into a fatal bind. A keen student of Frantz Fanon, the psychiatrist and theorist of anti-colonial struggle, Hussey reads the situation through the lens of psychology. The Algerians he encounters – mostly young men – rage at France; yet still it beckons. Millions of Algerians have made their home in French cities, trying to escape grinding poverty and unemployment at home. When Nicholas Sarkozy, the French president at the time, visited Algiers in 2007, he was greeted by crowds chanting: “Give us your visas!” Of this mass of contradictory feelings, Hussey writes, “nothing hurts more than unrequited love. It can literally drive you mad. This is why what happened in Algeria is best understood in the language of psychoanalysis.”

Hussey’s travels through the cities of the Maghreb make for dispiriting reading. He goes to Tangier, but not to pursue the tracks of Paul Bowles and other expatriate writers who lived in this famously exotic city. Morocco has its own population of troubled young men, some of whom have turned to radical Islam. Hussey notes that all 18 bombers convicted for the 2004 Madrid train bombings had connections to the city. In a cafe, he talks with patrons. “‘We should be making famous footballers who can play for Chelsea,’ I was told by a guy called Rachid, who spoke English with a Cockney accent as a result of his time spent in UK prisons. ‘But we don’t: we make jihadis instead.’”

There is little hope on these pages. Hussey gropes for explanations. Is such alienation cultural, economic, religious, and existential? He sometimes lurches from one conclusion to another; in other instances, he suggests a mishmash of all four factors. Some of Hussey’s conclusions are overblown – “It may be that what France needs is not hard-headed political solutions or even psychiatry, but an exorcist” – but his reporting is solid and memorable. He might have offered comparisons with other countries and regions – how does the situation in France compare with, say, Italy or Scandinavia? What part of the troubles he describes can be explained by globalisation? Still, there is much to ponder here.

Matthew Price’s writing has been published in Bookforum, the Los Angeles Times, The Boston Globe and the Financial Times.