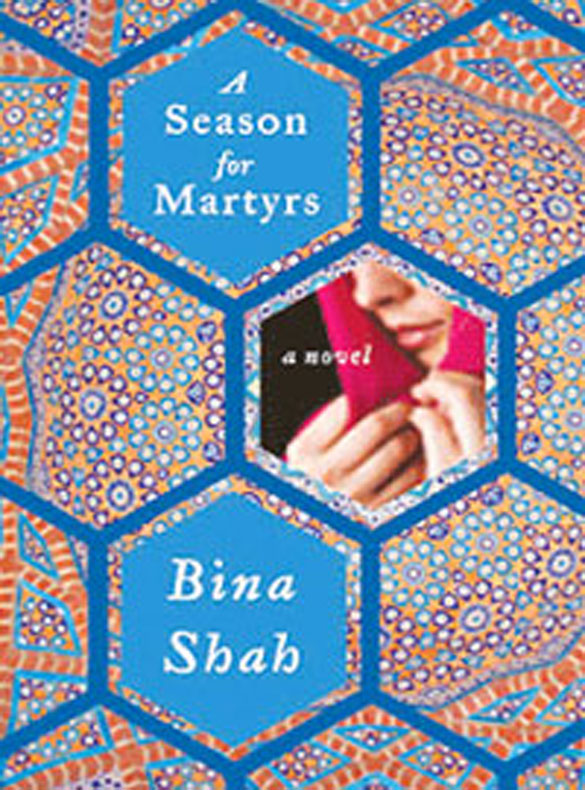 THE success of Bina Shah’s previous novels has depended largely on their fast-paced, high-stakes plots, sympathetic Karachiite characters drawn from the city’s ordinary echelons and under classes, and their contemporary settings and thematic relevance. Such works include The 786 Cyber Cafe (2004), in which a young Pakistani man’s entrepreneurial dreams and the virtual worlds of internet sex and online faith rub shoulders, and Slum Child (2010), a gripping story about a young Christian girl’s guilt-fettered attempts to escape her mother’s breakdown and the likelihood of falling prey to paedophilia and enforced prostitution.

In comparison, A Season for Martyrs (2014) is an altogether more expansive and compositionally challenging project, of the kind one might expect a writer to attempt as her career and her command of the craft matures. In this ambitious novel Shah endeavours to interweave episodes from Sindh’s feudal, poetic, Pir-enthralled, and anti-colonial past with a story which encompasses the personal aspirations and political activism of the province’s sons and daughters in the much more recent present, focusing on one young man’s experience of following the fatal return to Pakistan of the self-exiled Benazir Bhutto in 2007.

In the process, Shah’s new work combines fact with fiction, recorded historical and biographical details with personal anecdote, myth and legend. A Sindhi herself who can trace her lineage back to the early 18th-century Sufi poet Shah Abdul Latif Bhitai, the author describes the experience of writing the book as “somewhere halfway between a dream and a long hallucination into the past” — and, specifically, the “rich history” and “heritage” of “this beautiful province”. A Season for Martyrs, in its attempts to “envision” the lives of the poet-saints, and “understand” how their inheritors came to be “power-brokers in Sindh”, also endeavours — significantly for our times — to comprehend the magnetism of modern politician-poets like Bhutto who, since her death, has also been the subject of myth-making and veneration.

The novel’s contemporary narrative opens in Karachi and unfolds not only in the capital of Bhutto’s native Sindh, but also partly in Islamabad and Rawalpindi, where its denouement takes place. Spanning the nine weeks from Bhutto’s homecoming celebrations in mid-October, sabotaged by a suicide bombing, to her assassination at an election campaign rally at the end of December 2007, it presents, from the point of view of the 20-something protagonist Ali Sikandar, a critical and at times highly cynical perspective on the political career of Pakistan’s first woman prime minister. Although narrated from an omniscient third-person perspective, the 10 alternate chapters of the novel tell the story of the television researcher Ali, an estranged son of a pro-Bhutto Sindhi landowner, frustrated with his father’s blindness to the politicians’ faults and ashamed to confess his identity, are nevertheless very much dominated by the young man’s point-of-view.

Disenchanted with his media job, uninspiring studies, the privileged lifestyle of his Karachiite friends, even the prospect of a coveted US visa, and additionally depressed by his cameraman’s killing in the first assault on the Dubai-returned Bhutto, Ali starts to find some solace by “dissolving”, “annihilating” or “losing himself” in ecstatic “union” with the protesting crowds whose activities he is sent to monitor. These include those demanding for Musharraf’s resignation in the wake of the dismissal of the chief justice, and the imposition of emergency rule. Inspired by this feeling of belonging, he gradually shifts from the position of spectator to participant, becoming involved with the underground People’s Resistance Movement, and with the world of “smart” “Protests.

Marches. Vigils. Blogs.” aimed at circumventing the censure of both “army and establishment”, and ensuring that voices raised against dictatorship cannot be silenced.

Yet in the process of his increasing involvement, Ali does not undergo a dramatic political conversion so much as find a sense of purpose, a means to shirk off a stifling “helplessness”. Shah casts his trajectory from the mid-October day, when he is assigned the seemingly irksome task of obtaining “vox pop” responses to the return of the hallowed Benazir, to the late-December one when his optimism and imagination are finally fired by the infectious atmosphere of the Rawalpindi rally, as a journey from jadedness to reluctant admiration, and eventual, tragic epiphany.

Ali’s story is lodged between sketches of significant moments in the lives of those powerful men who previously presided over and shaped Sindh’s cultural heritage and history from the 10th to the 20th centuries. These include the Sindh-conquering general Charles Napier; the region’s saintly Sufi protector Khawaja Khizr; Shah’s determinedly anti-colonial ancestor Jeandal Shah; wily Scots explorer Alexander Burnes; Jeay Sindh founder G. M. Syed; and Pir Pagaro, the Hurs’ controversial leader, in addition to the ascetic scribe of the famed, folkloric tales of Sindh’s seven self-sacrificing heroines, Bhitai, whom the author describes as her book’s “guiding spirit”.

The most engaging of these accounts, it has to be confessed, are the most fantastical ones (rather than the surely erudite but less arresting attempts to animate significant historical events, such as the convening of influential Pirs at the Provincial Khilafat Conference in Sann in 1920). These include the tale of the honourable Jeandal Shah’s desperate effort to wrestle for his life with his master’s pet cheetah, after having failed to save Sindh from the British. The haunting story of the incarcerated and soon-to-be hanged Pir Pagaro’s last game of chess with his young awestruck jailer is also particularly memorable. Last but not least is the appearance in the novel’s later pages of a youthful Benazir, into whose world Ali’s Zamindar father Sikandar briefly steps to offer his condolences on the murder of Zulfiqar Ali Bhutto at the hands of Zia’s military regime in 1979. We see her here, delicate and chador-swathed, as a grief-stricken girl, desperate for this stranger to supply her with a shred of hope — which Sikandar does, by way of a second-hand story of having witnessed her condemned father’s composure and resilience. This is a story that, according to Shah, “would pass into legend, as would all the tales and myths surrounding [Bhutto’s] mysterious death” — and as the stories surrounding that of his daughter will surely do too.

In the Acknowledgements to A Season for Martyrs Shah mentions that the writer and critic Aamer Hussein “nicknamed” her work-in-progress her “GSN or ‘Great Sindhi Novel’”. In its range and density of historical content it may offer the beginnings perhaps, but the novel as it is currently composed is more a series of vignettes which serve to punctuate rather than profoundly connect with the more accessible, contemporary narrative of a young Pakistani’s journey from political alienation to hazy enlightenment. Shah’s novel is also perhaps an early contribution to a much wider cultural project of trying to grapple with Pakistan’s — and particularly Sindh’s — relationship to the ambiguous icon that is Benazir.

Madeline Amelia Clementshas a PhD in contemporary South Asian Literature in English from the University of East London.