Karachi: The City with the Ravished Soul 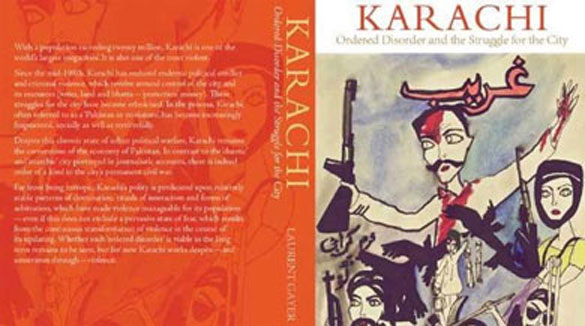 Laurent Gayer consoles us by saying Karachi is not as knocked-up as Caracas and Guatemala City in other parts of the world, where the state is in the same process of recession — silently predicting we may have to survive yet higher levels of violence in Karachi to match the thresholds achieved by them.

No one knows more about Karachi than this extraordinary Frenchman named Laurent Gayer, with his undying French sensibility producing gems like “normalisation of the unofficial” to describe the death of a metropolis in his book Karachi: Ordered Disorder and the Struggle for the City (OUP 2014). He consoles us by saying Karachi is not as knocked-up as Caracas and Guatemala City in other parts of the world, where the state is in the same process of recession — silently predicting we may have to survive yet higher levels of violence in Karachi to match the thresholds achieved by them.

Karachi was a halcyon city under the British Raj and under Pakistan, in the afterglow until the 1980s, when the country faced the Soviet invasion next door in Afghanistan, which stuffed the city with more alien populations than it could take without going bust.

Gayer says Karachi was founded by Hindu “Baniya” traders of upper Sindh, later supplemented by similarly occupied Hindus and Muslims from Gujarat. My own finding is that the Hindus of Gujarat, calling themselves Lohana, were not original to Gujarat. BJP leader L.K. Advani says in his memoir that he was a Sindhi Hindu, but his ancestors had come from Multan in Punjab. Discovery: Holi was first observed in Multan, where Prahlad and Holika lived.

Gayer writes: “[Through] its origins, Karachi has been a city of migrants. It was developed in the early 18th century by Hindu merchants (Baniya) from the Sindhi hinterland, before attracting large numbers of traders, entrepreneurs and workers from Kutch, Gujarat, Bombay and Balochistan, so much so that by 1921, the number of residents born outside of Karachi amounted to almost half of the total population of the city.” The city had self-destruct genes at its birth: it grew 369 per cent between 1941 and 1961, the “fastest rate of growth ever registered for a city of that size in world history”. Here is a shocking glimpse of what happened: “In 1941, 51 per cent of the city’s inhabitants were Hindu and only 42 per cent Muslim. Ten years later, 96 per cent of the city’s total population was Muslim, and only 2 per cent Hindu.” And 55 per cent were Muslim refugees from India!

Pre-Partition history of the city reads like civic utopia. Gujarati gentlemen, Hindu, Parsi, Ismaili and Memon, ruled as popular philanthropes. Today, even in the United States, Congressmen enjoy less public trust (12 per cent) than the mayors of American cities (70 per cent). The mayors of Karachi had that kind of charisma.

Seth Bhojoomal, the founder of modern Karachi and himself a prosperous merchant from the interior of Sindh, proceeded to fortify the city by cutting down mangroves and putting up mud walls to protect it from pirates. Then came Seth Harchandrai Vishandas, another tycoon-president of the Karachi Municipal Corporation, between 1911 and 1921. The milestones he created were the roads today known as MacLeod Road, Elphinstone Road, Clifton Road and Bandar Road, which became the M.A. Jinnah Road and “remains one of the city’s main arteries to this day”.

Gayer uses terms that are new to us, apart from “ordered disorder”, which was famously coined by Bertolt Brecht, like “domains of violence” and “overlapping of sovereignties” and “short arm of the law” and “normalisation of exceptions”, and many other Hobbesian tags that capture the ravished soul of Karachi.

His view of the city is microscopic, in keeping with the focus that lawlessness brings to its otherwise nondescript urban nooks: “[Of] the 10 most violent towns in 2011, four were already major sites of violence in 1995: Orangi in the west; New Karachi in the north; Korangi in the south-east; Garden/ Lines Area in the city centre. This continuity goes back further than 1995. The most dangerous part of the city in 2011-12 was the zone covered by the Pirabad police station in SITE Town. It includes localities such as Banaras Chowk, Aligarh Colony and Qasba Colony, which were on the frontline of Karachi’s first major ethnic riots in 1985-86.”

In the 1980s, violence began jolting the city and most of it was student-related, the Urdu-speaking ethnic community trying to throw away the yoke of Jamaat-e-Islami that had zeroed in on educational institutions after failing to make headway in electoral politics. This assault on the campuses of colleges and universities was the first “normalisation of the abnormal” that Pakistan allowed across the entire country, and that was to push it to its “failing state” phase in the 21st century.

Gayer’s next “normalisation” is the rise and rule of the MQM in the midst of growing fragmentation and volatility, giving the city space to breathe through the “balance of terror”. This, in turn, gave rise to “new politico-military forces contesting to the MQM and the state the monopoly over the use of coercion, representation and revenue collection”.

The Sindhi nationalist from his stronghold in the small cities of interior Sindh is angry about the way his city has been taken over by “aliens”: “Whereas, in 1941, Sindhi was the mother tongue of 61 per cent of Karachi’s residents, 10 years later, 51 per cent of the population returned Urdu as their mother tongue, as against 8.5 per cent for Sindhi.”

Migrations arouse fear and anger among host populations. The Muhajir migrant dominance of the MQM has been shaken by more migration from the northwest of the country: over 300,000 Pashtuns, displaced by the combat between the army and the Taliban or by the 2010 floods, have altered the ethnic equilibrium that kept the MQM in the ascendant. The Afghan refugees who fled the Soviet invasion — followed by the Taliban invasion of their own country — too came to Karachi through Balochistan.

Smaller diasporas of fear in the region hurt the Karachi equilibrium of power: Uzbeks, 30,000 to 40,000, and Hazara and Tajiks, 20,000 each, the Hazara feeding into the sectarian frenzy that the ideological state of Pakistan could not comprehend, given its medieval understanding of what had grown into a complex modern phenomenon. Its jihad franchise had sapped the state’s monopoly of power to even examine the damaging effect these Diasporas were having on the city.

More “normalisation of the unofficial” took place when Karachi received Bangladeshis, Burmese, Sri Lankans, Filipinos, Thais, Iranians, Iraqis and even Ethiopians, without any border scrutiny. These illegal aliens are “spread over 22 localities in the city, using 29 government schools and nine hospitals, while running 44 out of the city’s 869 religious seminaries”.

Al-Qaeda and its Pakistani acolytes shake Karachi down daily to top up their war-chests. The ransom note arrives and the amount of “Bhatta” is indicated on it. If you don’t pay up, you are found dead in front of your house or right in front of the police station where you had gone for protection. And if the police officer becomes too serious about protecting you, he is more of a sitting duck than you are.

Unlike elsewhere, most violence in Karachi is religious-Islamic, and that includes bank robberies. Even when common criminals use Islam as cover, it is hardly different existentially from the real stuff.