Indo-Pak animosity has made a lot of people suffer over 72 years, defying wisdom and stultifying growth in the region. A lot of it had to do with history, but a lot is also due to the inability to reconcile state identity with the needs of modern times. 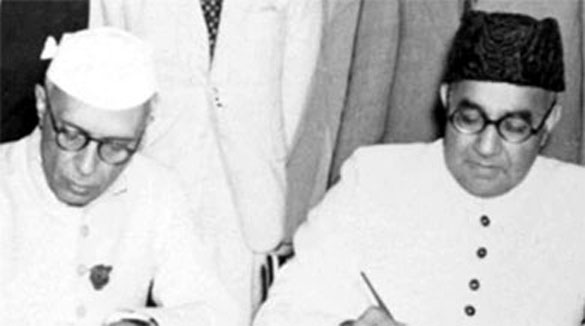 The Nehru-Liaquat Pact, also known as the Delhi Pact, was signed in 1950.

History-writing became polarised along narrow nationalisms till the two couldn’t even discuss what estranged them. With Pallavi Raghavan’s book, Animosity at Bay: An Alternative History of the India-Pakistan Relationship, 1947-1952, you are compelled to make an effort to arrive at a dispassionate view of how the two states behaved in 1952. This period saw India and Pakistan facilitating a transfer of populations, rationalising bilateral relations after the violence of Partition, sorting out canal-water issues and evacuee property disputes without the venom you see between them today.

Can the two retrace their steps and become “normal”? Raghavan wishes to study “the ways in which the legacy of a Partition can provide for productive spaces of innovation for a state”. She looks into the collaborative exercise which India and Pakistan had to do “in consultation with one another and which could not be unilaterally achieved”.

The book studies the Nehru-Liaquat Pact of 1950, which the two sides would dismiss out of hand today. It was a declaration binding the two states to protect “the interests of minorities in both their countries”. The details of how the population transfer was handled — with particular reference to making the minorities stay rather than leave — is a highlight of the book. One must note here the “neat fit” the transfer aspired to when you realise that neither the Bihari Muslims of Bangladesh nor the Urdu-speaking Muslims of Karachi have been allowed to “integrate”. The book details the incongruity of the Hindu migration from East Bengal to Assam as well.

Remarkably, the book notes, the politicians engaged in the exercise were completely free of the antipathy for minorities that you see today. Animosity, indeed, was for later times. Look at what the Liaquat-Nehru Pact promised: “Both governments solemnly agree that each shall ensure, to the minorities throughout its territory, complete equality of citizenship, irrespective of religion, a full sense of security in respect of life, culture, property and personal honour, freedom of movement within each country and freedom of occupation, speech and worship, subject to law and morality.”

Prime Minister Jawaharlal Nehru wanted a no-war pact with Prime Minister Liaquat Ali Khan. The mere fact that it was actually discussed measures for us the “normal” goodwill that existed despite the years of quarrelling during the Pakistan Movement. That Nehru wanted it seems normal, but Liaquat — as leader of a revisionist state — wanting it is extraordinary by today’s parameters. However, in those early days of obsession with sovereignty and suspicion of “arbitration”, India’s powerful civil service advised against signing the pact. Though what is important is that the two states actually discussed it.

The most remarkable achievement noted in the book is the Indus Waters Treaty of 1960. The BJP might curse Nehru for having signed it — Pakistanis too cursed General Ayub for it — but the truth is that Nehru did extract from it the advantage of using some water from Pakistan’s three “exclusive” western rivers, Sindh, Chenab and Jhelum, for consumptive use, that is, agriculture.

Raghavan notes: “Nehru and Liaquat were defining the Indo-Pakistani relationship as one that was admittedly tense, but one that could also be negotiated in inherited frameworks of international relations, and the emphasis they placed on the paramount capacity of the nation state.”

Today, India under Prime Minister Narendra Modi can lay claim to the status of primus inter pares, or first among equals, in South Asia on the basis of its economy. Pakistan needs trade and a trade-route deal too, and says so under the much-disenchanted PM Imran Khan and his current army chief. “Normalise through trade” is the slogan that will work if we want to set aside the complicated baggage of animosity in the region.