The Grand Jihad: How Islam and the Left Sabotage America

The Grand Jihad: How Islam and the Left Sabotage America (Andrew C. McCarthy) 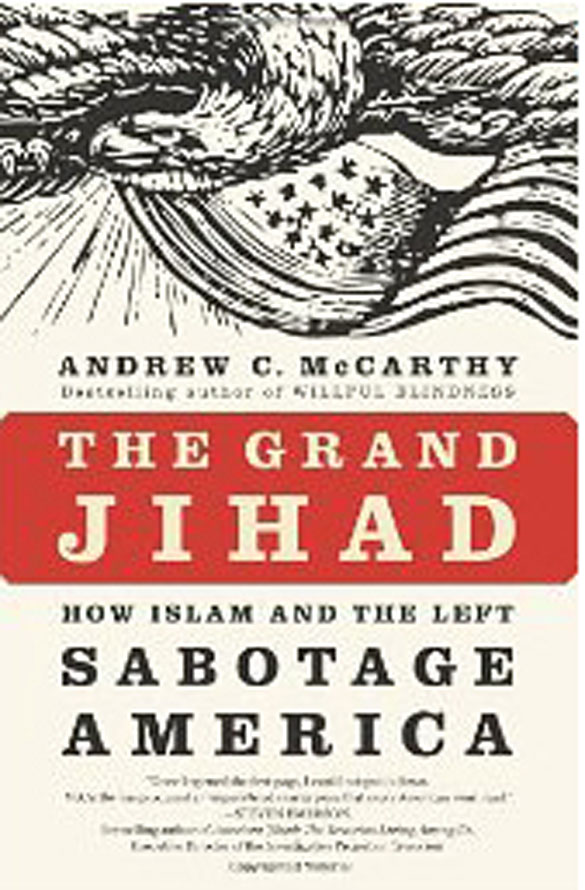 The political left has been accused of serial hypocrisies to the end of advancing ideology over celebrated causes.  But according to Andrew McCarthy, the alliance between Shariah-advancing Islamists and the left is the most significant betrayal yet of claimed liberal causes like equal protection and basic civil rights.

In The Grand Jihad: How Islam and the Left Sabotage America, Andrew McCarthy demonstrates that leftists and political Islamists have mounted a dynamic double-front against American and Western traditions.

While acknowledging that the alliance may be temporary while deferred cultural disagreements are tabled, McCarthy builds a strong historical and motivational case for the contemporary collaboration.  The premise of the book -- that both groups work to sabotage fundamental strongholds of rule of law and expressive rights -- is key to understanding the dimensions of the cultural conflict.

With constitutional American and political Islamist objectives clashing, sober insight and sound analysis are useful.  Andrew McCarthy has unique qualifications as an assistant United States attorney for the Southern District of New York at the time of the first World Trade Center attack; he served the people well in the successful prosecution of Omar Abdel-Rahman (the "blind sheikh"). Rahman is now serving a life sentence.  The unique and intensive trial strategy added dimensional legal expertise to McCarthy's biography, but most importantly to his role as a national security commentator, he also gained rare insight into the history, mentality, and the pervasive honour and shame code that drives militant Islamists.

McCarthy begins with the historical foundation for the deep natural attraction that draws Islamists and leftists to pursue many of the same ends by employing similar means.  The shared touchstone is centralized control of society for the end of accomplishing social justice -- at least, as respectively defined.  Both schools unite on the need to subjugate individual liberties and self-determination to their agendas.  Without clearly understanding the dynamics of this alliance, it is impossible to reconcile McCarthy's assertion of the left's apparent hypocrisy and seeming betrayal of equal rights, feminism, and freedom of conscience.

Similar to Jonah Goldberg's approach in Liberal Fascism, McCarthy starts with the philosophical influence of France's Jean-Jacques Rousseau to explain the left's inclination to authoritarianism and statism.  The idea of utopian social engineering is not new -- nor, as McCarthy demonstrates, is the statist's admiration for Islamist goals a recent phenomenon.

McCarthy finds notable parallels between Rousseauian thought and the teaching of Sayyid Qutb, Muslim Brotherhood theorist and father of modern Islamism, including mutually admiring statements on the social obligations of government, merging of civil and religious realms, and disdain for capitalism and private property -- all in pursuit of relative utopianism.  Both used a version of "forced freedom," or coerced subjection to statist goals, to undermine the concept of individual autonomy.

While Rousseau's model system was based upon a lopsided social contract with a beneficent state, the Islamic theocratic system "holds that Islam is the complete, obligatory guide to human existence, governing all matters political, social, cultural, and religious from cradle to grave (and, of course, beyond)” McCarthy confirms this with influential Sunni Sheikh Yusef Qaradawi's pronouncement: "Legislators don't really legislate; they are merely vessels of Sharia."  Whether via technocrats or via clerics, both systems offer a totalitarian and collectivist path to the destination called socially approved justice.

Are Non-Terrorist and Terrorist Islamist Goals the Same?

Critical to The Grand Jihad's conclusions is the charge that Americans have bought into the proposition that non-terrorist Islamists are generally benign.  McCarthy builds a convincing case for the existence of a false dichotomy in classifying all Muslims as either terrorist jihadists or non-violent -- and therefore friendly and compatible Muslims -- as he says that non-terrorists have been so effective in advancing the very same political goals that they worry about terrorists retarding their progress.  In fact, Muslim leadership has voiced concern that al-Qaeda set back their efforts by launching the violent 9/11 attack.  McCarthy posits that the difference is means and methods, not goals.

McCarthy asserts that this rationalization accrues from years of explaining away the growing threat from Islamism while describing those who voice concern as alarmists.  Many American opinion leaders apply the benefit-of-the-doubt approach to pious Muslims who are "not uncompromising, blood-soaked Islamist[s]" to qualify them favourably as a "cause for hope."

McCarthy borrows a metaphor to underscore his argument that the non-violent -- but Sharia-advancing -- Islamist is as dangerous as the terror-plotter, writing that the culturally insurgent Islamist is like "the polite collector you pay in the hope that the leg breaker won't be next at your doorstep. And even as he sneers in his nice suit at the leg breaker's cruelty, you somehow know all your money is going to the same place."

Imposition of Sharia Is the Goal

One of the explicit aims of The Grand Jihad is to convey the warning that a civilization cannot predict a threat that is not first recognized and understood.  With this cautionary backdrop, McCarthy asserts that the essential threat America faces is imposition of sharia by degrees, not jihad.  "The goal is sharia. Jihad is not the direct goal of jihadist activity, violent or not."

A critical component of McCarthy's warning is that national security policy "obsesses over means -- in particular one tactic, terrorism -- while ignoring the end the means seek to accomplish."  While homeland security operatives focus on terrorism, the Sharia movement "slipstreams behind terrorists," and it "bores into our institutions and tries to hollow them out from within."

For those still investigating whether Sharia is an existential threat, McCarthy elucidates the ways in which Sharia is antithetical to America's bedrock values: "It establishes a state religion, rejects the freedom of citizens to govern themselves irrespective of a religious code, proscribes freedom of conscience, nullifies economic freedom, destroys the principle of equality under the law, subjugates non-Muslims in the humiliation of dhimmitude, and calls for the execution of homosexuals and apostates."  When Sharia regulates everything from the personal aspects of marriage, divorce, custody, inheritance, property ownership, and charitable giving to societal concerns regarding land use, commercial transactions, finance, military, government structure, and treaty law, there is no room left for participatory democracy.

For those worried that First-Amendment free exercise protections would prevent penetration of the religious cloak around Islamism, McCarthy writes that religious exercise in America may be protected, but there is no prohibition against critique of a doctrine.  He also suggests that conduct driven by beliefs is open to inspection.  He warns that as we allow Islamists to "eviscerat[e] the line dividing the secular from the spiritual," the result is that "we are unilaterally surrendering far more than the space society owes to religion."

McCarthy also discusses dawa, the sharia-based command to spread Islam, which he says is accomplished in the United States by a two-pronged public relations campaign.  First, sharia is presented as innocuous and constitutionally consistent.  Second, any who work to expose the realities of sharia and its radical proponents are called racist or Islamophobic.

As McCarthy demonstrates, Islamists are adept at manipulating political will, public opinion, and even legal outcomes with the threat of bigotry as leverage.  His charge that "Islamism does not participate in politics[;] it uses politics" is a pattern witnessed by Americans many times since 9-11.

One prototypical episode in this ongoing saga of "grievance theatre," also called law fare, is the Flying Imams production.  Not only did these six imams ostentatiously pray in what McCarthy calls a "tawdry display" before a flight out of Minneapolis International Airport in 2006, but they also chanted what has become the indicator of every terror attack: "Allahu Akbar!"  They loudly cursed U.S. foreign policy, and several requested seat belt extenders that were stowed within arm's reach at their strategically-dispersed seats.

The various Muslim civil rights and public relations groups rolled into action, and suit was filed against the airline, the government, and the passengers who reported the conduct.  Ultimately, the airline paid an undisclosed settlement sum.  The massive intimidation campaign scored a huge victory when the judge awarded settlement funds to the imams, and it provided a model for similar stunts, including the recent amusement park showdown where Muslim women demanded to ride roller coasters in hijab, despite notice and warnings that headgear was not allowed.

If America's fate is to be different from that of Europe, McCarthy expects that this very heritage of individual determinism will fuel the fight for freedom.  While Americans still have the right to speak and the right to persuade, there is time to sound the call to action.

America's Founders provided a constitution structured to guarantee freedom of conscience, not freedom from examination.  Whether there is interest in an unfettered public discussion of Islamist designs based upon the European record -- regardless of the protests and blanket denials -- may determine the course and trajectory of this cultural dilemma in the United States.  Would this notion -- that something called religion but act as a subversive socio-political system -- be given an unqualified berth by the Framers who labored to assure personal and religious liberty?