THE ULTIMATE AMBITION IN THE ARTS OF ERUDITION

A Compendium of Knowledge from the Classical Islamic World

Edited and translated by Elias Muhanna 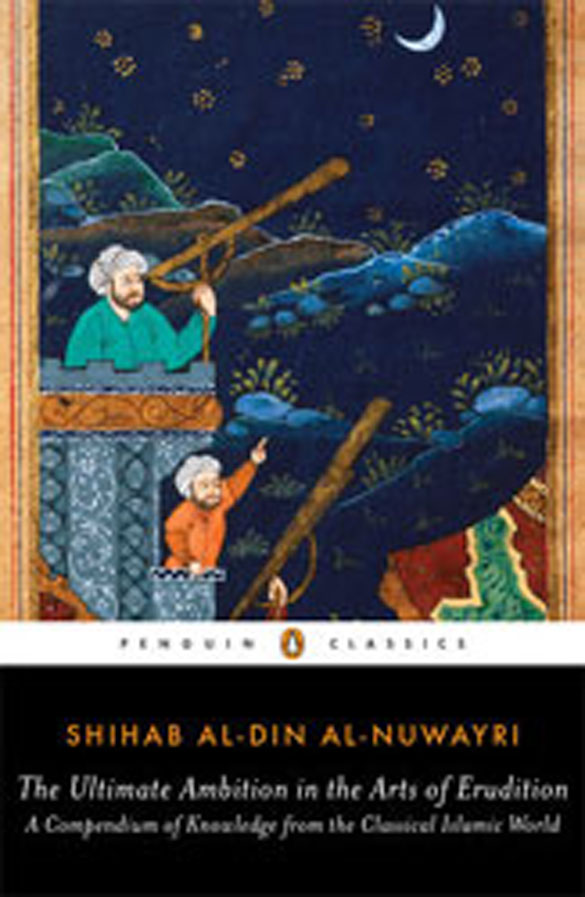 Shihab al-Din al-Nuwayri was a bureaucrat from an elite family in medieval Egypt. Until his retirement, probably in 1316, he served the ruling Mamluk dynasty in various roles, running the sultan’s private treasury, managing imperial properties in Damascus, heading a local chancery in Lebanon, and supervising hospitals and colleges in Cairo. His career coincided with a period of relative stability in the region, as the Mamluks under the sultan al-Nasir Muhammad built a prosperous empire stretching from North Africa into the Levant. At the end of his tenure, al-Nuwayri devoted himself to the task that would define his life, the compilation of a truly gargantuan encyclopaedia.

Sprawling over two million words and 33 volumes, al-Nuwayri’s “The Ultimate Ambition in the Arts of Erudition” has long been considered a monument of classical Islamic learning. A significantly abridged version is now available in English, translated by Elias Muhanna, a professor of Arabic literature at Brown University. The text opens a window into a lively and eclectic world of scholarship, a realm of humanist scribes and poetry-spouting polymaths.

Its wide-ranging contents span chapters on cosmology, sociology, human biology, zoology, botany and history, but to describe al-Nuwayri’s sparkling material in such bald terms does not do it justice. Reading this compendium is like exploring a cabinet of curiosities, each section home to uncanny and startling mirabilia. Its many wondrous tidbits include the various Arabic names for dust (“the dust that swirls around the hooves of horses, . . . dust stirred up by the wind, . . . the dust of a battle, . . . the dust of feet”); the uses of radish in defending against scorpions; recipes for homemade aphrodisiacs; digressions into puzzling etymologies; the contents of the sultan’s buttery; a grisly summary of a plague in Cairo (“The corpses that were not well buried were eaten by the dogs. Meanwhile, the people who lived ate the dogs”); marriage contracts for the deaf and mute; and a description of how Adam, when cast out of Paradise, perfumed India with his tears. There are also pages of wry proverbs, and euphemisms, and excerpts from arresting poetry. In part, the aim of the compendium was to instruct members of al-Nuwayri’s own class. Sophisticated Mamluk bureaucrats prided themselves on their range of knowledge and their ability to adorn letters and speech with an apt poetic line.

Al-Nuwayri marshalled this overflowing detail with the earnest precision of a clerk, dividing his tome in methodical sections and subsections (the complete table of contents is included here as a 13-page appendix). Through this zeal for classification, the structure of the universe and the affairs of human beings could be understood in a systematic way.

Centuries of diverse scholarly activity and textual exchange buttressed the encyclopaedia. Al-Nuwayri quotes earlier thinkers extensively, including figures who may be familiar to Western readers, like Aristotle, Avicenna and the ancient Greek physician Dioscorides. In a self-­effacing note in his preface, he insists the compendium is the achievement of other writers. His own words “merely interpret the book’s contents and frame them like eyebrows over the eyes.”

Muhanna renders what might have been a rather baroque text in elegant prose, shedding formalities from the classical Arabic that would tire a modern audience. In whittling down al-­Nuwayri’s opus, his selections skew to the crowd-pleasing. Large chunks of history (which made up the bulk of the original text) and scribal etiquette are jettisoned, while the heart of the translation consists of marvellous chapters on wildlife (“mute beasts”), botany and “sexual medicines.” Beyond these more obvious charms, the pleasure of “The Ultimate Ambition” lies in exploring its bewildering scope, a range emblematic of the broad imaginations and curiosities of the 14th-century Islamic world.

Kanishk Tharoor is the author of a story collection, “Swimmer Among the Stars,” and the presenter of the BBC radio series “Museum of Lost Objects.”