‘Ten Lessons for a Post-Pandemic World’ Is an Intelligent, Learned and Judicious Guide for a World Already In the Making 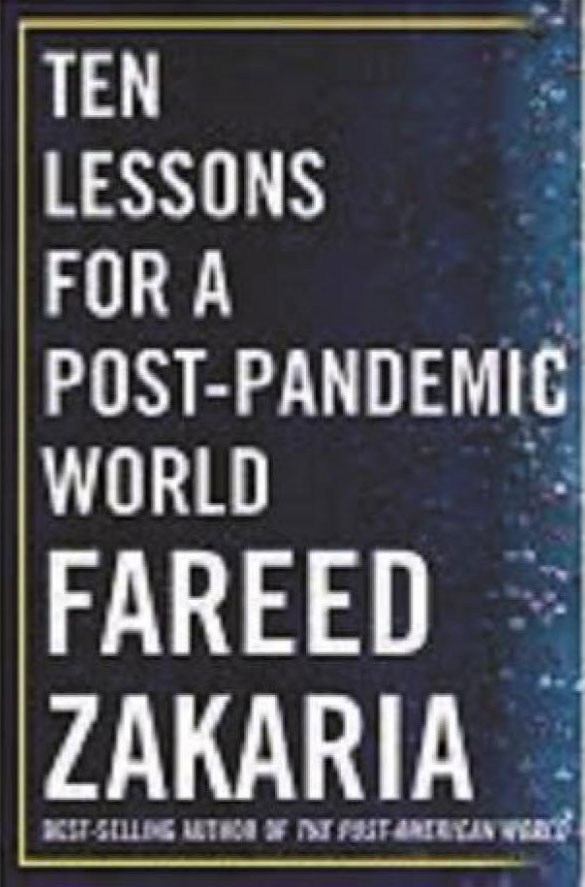 Oh, no, not a book about the pandemic just a few months into Covid-19. Not another series of snapshots overtaken by tomorrow’s events. Fareed Zakaria, a CNN host with a Ph.D. from Harvard, does not fall into this trap.

Wisely, he stays away from the daily battles over masks and lockdowns. Nor is doom mongering his business. Instead, “Ten Lessons for a Post-Pandemic World” employs a wide lens, drawing on governance, economics and culture. Call it “applied history.” What insights does it offer during a catastrophe that evokes the Spanish flu after World War I, which claimed 50 million — some reckon 100 million — lives?

That story comes with a word of caution about historical analogies. Zakaria ascribes “seismic effects” to such cataclysms. Ancient Athens, a proud democracy, never recovered from the plague. The late-medieval Black Death all but wiped out Europe with a toll between 75 million and 200 million. Yet note that it was estimated to have run for 100 years. The Spanish flu trickled away after two. As mortality soared in the United States, the economy dropped by only 3.5 percent. It took until the 1930s before we could actually see a virus under the electron microscope. Today, SARS-CoV-2 was sequenced almost instantaneously.

The past, then, is like the Sphinx with her ambiguous advice. Not only has science learned a few things. So have governments, which went for penny-pinching and deflation after the Crash of 1929, but now pour out trillions.

Having laid out a “gloomy compendium of threats,” Zakaria rightly celebrates “our resilient world.” States actually “gain strength through chaos and crises.” He also dispatches the facile notion that despots like China’s Xi Jinping do better than democratic leaders. We owe the coronavirus’s leap around the globe to China’s suppression of lifesaving data; thereafter, the police state took over. Khamenei’s Iran and Erdogan’s Turkey performed badly, and so did Brazil, ruled by a would-be caudillo.

The democracies did not succumb to authoritarianism, but neither is there any clear pattern. At least until recently Germany, Denmark and Austria performed best, Belgium, Sweden and the United Kingdom worst. Taiwan and South Korea quickly contained the virus without totalitarian tactics. The United States is so-so, near the bottom of the Top 10 in deaths per million. So, what are the lessons?

What matters is not the ideological coloration of government or its size, but its quality, Zakaria says. He argues for “a competent, well-functioning, trusted state.” Sweden is all that, but also high up on the League Table of Death. The United States has proved neither competent nor cohesive. It is an archipelago of some 2,600 federal, state and local authorities charged with health policy.

Yet federal Germany, with its ancient history of decentralization, is also a hodgepodge and still shines forth. The ur-model of the strong state is France. In terms of deaths per million, it ranks far above confederate Switzerland, with its 26 cantons jealously holding off Berne.

So, what is good governance? An efficient bureaucracy like Prussia’s, infused with the spirit of freedom rooted in the American Creed? Beyond your small-town D.M.V., the United States seems to enjoy neither. Social Security is superb, Veterans Affairs a disaster. Meanwhile, officialdom has grown exponentially in a supposedly “anti-statist” country. America, Zakaria says, must learn “not big or small, but good government.” Amen to that — though not forgetting Churchill’s quip that the United States will eventually do the right thing after exhausting all the alternatives.

Zakaria lays out the road from the pandemic to the transcendence of America the Dysfunctional. The to-do list is long. Upward mobility is down, inequality is up. The universities of the United States lead the global pack, but a B.A. at one of those top schools comes with a price tag upward of a quarter-million dollars. The country boasts the best medical establishment, but health care for the masses might just as well dwell on the moon.

We should adopt the best practices of northern Europe, Zakaria counsels. Like Sweden long ago, Denmark is the new Promised Land, even when compared with the rest of Europe. Striking a wondrous balance between efficiency, market economics and equality, those great Danes embody an inspiring model; alas, it is hard to transfer. A small and homogeneous country on the edge of world politics, Denmark is the very opposite of the United States. Maybe its people should occupy America for a couple of generations to reform 330 million über-diverse citizens.

The world’s troubles are not just Made in U.S.A., Zakaria rightly notes. They are rooted in ultra-modernity: globalization, automation, alienation, mass migration, the lure and decay of the world’s sprawling metropolises. These are the stuff of misery — and the fare of cultural critics since the dawn of the industrial age.

With his lively language and to-the-point examples, Zakaria tells the story well, while resisting boilerplate as served up by the left and the right. Nor does he spare his own liberal class, the “meritocracy” of the best educated and better off, which he fingers ever so gently as deepening the divide between urban and rural, elites and “deplorables.” He might have said a bit more about the uses and abuses of cultural hegemony that have driven hoi polloi into the arms of Donald Trump and triggered defections from the democratic left in Europe.

The book’s central message comes in the last paragraph: “This ugly pandemic has … opened up a path to a new world.” Which one? The gist of Zakaria’s program is revealed by a recent editorial in The Financial Times, which he quotes approvingly. That newspaper was once a cheerleader of global capitalism. Now it argues that “many rich societies” do not honour “a social contract that benefits everyone.” So, the neoliberalism of decades past must yield to “radical reforms.” Governments “will have to accept a more active role in the economy. They must see public services as investments. … Redistribution will again be on the agenda; the privileges of the … wealthy in question.” Now is the time for “basic income and wealth taxes.”

Not bad for a supposedly capitalist mouthpiece. Yet this should not come as a surprise. Both The Financial Times and Zakaria’s book urge a revolution already upon us, and probably represent today’s zeitgeist and reality. Free-market economics à la Ronald Reagan and Margaret Thatcher have had a nice run since the 1980s. These days, Covid-19 is merely accelerating the mental turn engendered by the 2008 financial crisis. We are all social democrats now.

Government in the West is back with industrial policy and trillions in cash. It is not a radical, but a consensual project. Taxation, a tool of redistribution, will rise along with border walls. For the more perfect welfare state can flourish only in a well-fenced world that brakes the influx of competing people and products.

If that mends the miserable American health, transportation and public education system without cutting into the country’s dynamism, then more power to the spendthrift. Still, “writing checks,” Zakaria warns, sometimes “goes badly.” Especially if it feeds consumption, not investment. Or favours giga-corporations. After half a lifetime of retraction from the economy, big government is back — and looks as if it will stay. But beware of what you wish for.

Meanwhile, read “Ten Lessons.” It is an intelligent, learned and judicious guide for a world already in the making. May we all be as smart as the Danes. They have marvellously combined welfarism and individual responsibility. But they have not invented the PC, MRT, iPhone or Tesla, not to speak of Post-its and the microwave popcorn bag.

Original Headline: Fareed Zakaria Looks at Life After the Pandemic