From Afghanistan to a More Dangerous World

From Afghanistan to a More Dangerous World 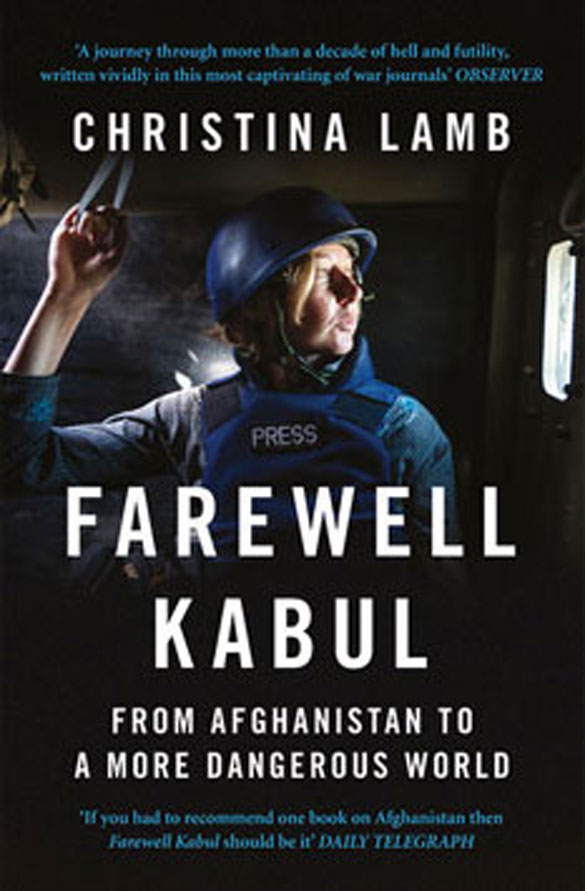 There is a certain subspecies of journalist who comes to feel more at home in a foreign war zone than in her native land, who gets so plugged in with power brokers and average people that her access is the envy of diplomats and intelligence agents, and who develops a knack for explaining a country’s idiosyncrasies to a readership keen to make some sense of “that mess over there.”

Christina Lamb, a British journalist and author, stands out among this subspecies as one of the premier explainers and explorers of Afghanistan. She is that rare breed of reporter who not only manages all of the above, but who also refuses to abandon a story even when it disappears from the front pages or becomes exceedingly dangerous to cover. This career choice — which comes with a mandatory flak jacket — offers rewards that are bittersweet: The thrill of having a front-row seat to history is lessened by the loss of still-young colleagues and sources you spoke with only yesterday. But perhaps one of the best rewards is living to tell the tale that virtually no one else can.

Lamb achieves exactly that in “Farewell Kabul.” Following the success of her books “The Sewing Circles of Herat” and “I Am Malala” (with Malala Yousafzai), Lamb’s newest volume sheds as much light on the post-9/11 military adventurism of the United States and Britain as it does on Afghanistan and, by default, on neighbouring Pakistan. With more than 25 years of experience reporting in the region, Lamb takes the reader on a journey that begins in Kabul on Christmas Eve 2001.

A few days earlier, on Dec. 22, Hamid Karzai had been inaugurated as the new president of Afghanistan. Most Afghans, Lamb points out, did not even know his name. But Westerners found him dignified and eloquent, and he had been chosen at a conference in Bonn earlier that month in part because he wasn’t just another warlord. His name may have been new to most of the planet, but not to Lamb. She had come to know Karzai when she lived in his neighbourhood in Peshawar in the late 1980s, back when he was a spokesman for a small mujahedeen group fighting the Soviets.

Late December 2001 was a little more than three months after Al Qaeda had flown planes into the World Trade Centre and the Pentagon, killing nearly 3,000 people. America responded by launching a war to topple the Taliban and kill or capture all of Al Qaeda’s arch-­terrorists, who’d found succour with the Taliban regime. Several American allies were cajoled to help, most notably Britain, though as Lamb observes, when Britons look back on the first and second Anglo-Afghan wars of the 19th century, they see mostly graveyards. In 1963, the British Prime Minister Harold Macmillan declared: “Rule No. 1 in politics: Never invade Afghanistan.”

Unless, of course, it’s being used as a launch pad by Islamic extremists. Al Qaeda’s attack provided more than enough of an excuse for the United States and its allies to invade Afghanistan — or “liberate” it, as the Bush administration put it. When Lamb made a quick visit to New York City that December following 9/11, a still-­smouldering ground zero brought home to her the magnitude of devastation for Americans. But most Afghans, she points out, had no access to television or the Internet, and didn’t believe towers so tall could exist, much less be destroyed by planes. Her senior Pakistani sources were sure it was the work of Israel’s Mossad.

George W. Bush, on the other hand, was impressed with how swiftly the largely Pashtun Taliban had been toppled, thanks to an alliance with its rivals in the Tajik-­dominated Northern Alliance. So impressed, in fact, that around the time of Karzai’s inauguration, Bush was discussing an invasion of Iraq.

“Elections were planned for the following spring,” Lamb writes. “But when I talked to my Afghan friends, nobody mentioned democracy or women’s rights. They wanted security and food and speedy justice. The West had its swift military success, dismantling the Taliban regime in two months. I don’t think anybody spoke to ordinary Afghans about what they wanted.”

Although the countless mistakes and policy blunders that were made have been documented elsewhere, Lamb connects dots in a way that few others manage. She shows how Afghanistan led to Iraq and how Iraq led to ISIS. Lamb says the West’s sense of failure in both Afghanistan and Iraq led President Barack Obama and Prime Minister David Cameron to stand by “as more than 200,000 people were killed in Syria and Vladimir Putin started to redraw the map of Europe, annexing Crimea from Ukraine.”

Inevitably, Lamb often turns her attention to Pakistan, where she began her connection with the region after befriending a young Benazir Bhutto, who would go on to become her country’s prime minister before being assassinated in 2007. Personal affections aside, Lamb’s overall impression of Pakistan mirrors the feelings of most Afghans — of suspicion and exploitation. Without the help of Pakistan’s ISI, or Inter-Services Intelligence, neither the Taliban nor Al Qaeda would have thrived, nor would it have taken so long to find and kill Osama bin Laden. Lamb sounds nearly Afghan herself as she describes her reactions to 9/11. “ ‘Afghanistan didn’t do this,’ I wrote in my diary. ‘I don’t know who or how, but I am sure this came from Pakistan.’ ”

Some of Lamb’s most moving observations arise in her postscript, aptly titled “War Never Leaves You.” Journalists of her subspecies usually cannot help themselves — at some point they need to go back. It’s now 2014, Lamb is based in Washington, and she misses Afghanistan “with a yearning that I could not explain — in a way that was deep and anguished, like the lament of an ancient mariner for a troubled sea.” Despite the comforts of the West, “I missed squatting uncomfortably on village floors drinking green tea and listening to fantastical stories of ancient feuds. I never remembered the bad bits.”

Ultimately, those bits pale in comparison to what she finds upon her return to Afghanistan that January. The Taliban are resurgent, even seasoned journalists are being targeted, beloved guesthouses and hotels that were considered safe territory for foreigners are now being bombed or shuttered. Colleagues have been murdered, and opportunities to learn from past mistakes have been squandered. Karzai, once the darling of Washington, is now so publicly at odds with the United States that he slams it in his farewell speech. Britain doesn’t get so much as a thank you for its 13-year effort in Afghanistan before pulling out all its troops, and few Britons view the mission as a success.

But perhaps, as Lamb says, we’re living in an era when wars no longer come to a clear end. Especially now, with the Taliban in the midst of a murderous new offensive launched in mid-April of this year, it’s difficult to point to hallmarks of progress amid the rubble. Yes, once-secluded Afghans are now enjoying cellphones and Facebook — and have gone to vote a few times — but security is as elusive as ever.

To cheer herself up, Lamb goes to the city of Herat. There, the warlord-­turned-politician Ismail Khan makes time for her, but even he is gloomy. Khan believes, for example, that the international community’s disarming of 100,000 mujahedeen in his area was a mistake, making the region less secure than ever. Foreigners, he says, come to Afghanistan too briefly and learn too little. “They want facts and dates, things which are not our way,” he tells her. “We can converse all our lifetimes, but you will not understand.”

“Farewell Kabul” will help its readers understand Afghanistan a little better — or at least give them a glimpse of its deepest fault lines. They may even come to understand how a place can be so beautiful and so hideous at once. Like a journey through the war-torn country itself, Lamb’s 640-page book may take some time to get through, but it ends up being more rewarding than one could have ever imagined.

Ilene Prusher covered Afghanistan for The Christian Science Monitor from 2001 to 2004. She teaches journalism at Florida Atlantic University and is the author of the novel “Baghdad Fixer.”