Editor's note: Firstpost contributor Hassan Suroor has written a book that looks at the Muslim community in India today. He explores and dismantles the stereotypes and holds up a mirror to their reality. Here's an excerpt from Suroor's India's Muslim Spring: Why is Nobody Talking About It?

Let me confess that this is not the book I set out to write. The book I had in mind was about the unchanging face of Muslim fundamentalism in India. But barely a few weeks into research, I discovered I was completely on the wrong track. The big story staring me in the face was quite the opposite— far from flourishing, Muslim fundamentalism was actually dying a slow death. As I travelled across the country and spoke to people, I found that over the past decade there had been a profound change in the Muslim mindset. Today’s Indian Muslim, I discovered, was altogether a different species—educated, aware, wiser, less sectarian and more pragmatic ....

Away from the sensational headlines about Islamic extremism, a quiet revolution is taking place. The Muslim discourse has moved on from an obsessive focus on sectarian demands (does anyone remember the last big debate on Muslim Personal Law, for example?) to the more secular bread-and-butter issues. Where once the dinner table talk in Muslim households was unremittingly negative and pessimistic (it was all about how Muslims were being ‘crushed’ and trampled upon, and had no future in India), today it is about change and looking forward. There is a new optimism abroad that is hard to miss. What is significant is that the change is being urged upon not by the usual suspects—the agnostic left-wing Muslim intellectuals...— but by ‘gold-plated’ practising Muslims, deeply conscious of their Muslim identity and unapologetic about flaunting it.

There is a new generation of Muslims who want to rid the community of its insular and sectarian approach by concentrating on things that affect their everyday lives: education, jobs, housing, and security. They despair of mullahs and self-styled Muslim ‘leaders’. And they speak a language that is modern and forward-looking. Their interpretation of Islam stresses inclusion and tolerance. They abhor the use of violence in the name of Islam. They may not be wildly enthusiastic about the western notion of free speech and ... some even tend to share the conspiracy theories about Salman Rushdie’s alleged motives [behind writing The Satanic Verses], but they condemn the campaign of intimidation and harassment to which he has been subjected in the name of ‘defending’ Islam and the Prophet. They are embarrassed by such antics which, they say, bring shame to the community and, indeed, Islam itself. There is a feeling of having been let down by previous generations—their parents, grandparents—who they believe were too timid to challenge the fundamentalists. ‘We want to draw a line under all that and move on,’ is a common refrain.

Notably, it is the young women, often in ‘hijab’, who are driving the change. Contrary to the stereotyped image of the ‘Muslim woman’, they are educated, articulate, and conscious of their rights and have aspirations that are no different from those of any other modern Indian woman. I found them more progressive in many respects than their male peers. And their struggle is greater as they are engaged, simultaneously, on two fronts—challenging the male Muslim orthodoxy and fighting for a wider change in the community that they hope would alter the prevailing negative perceptions of Muslims. 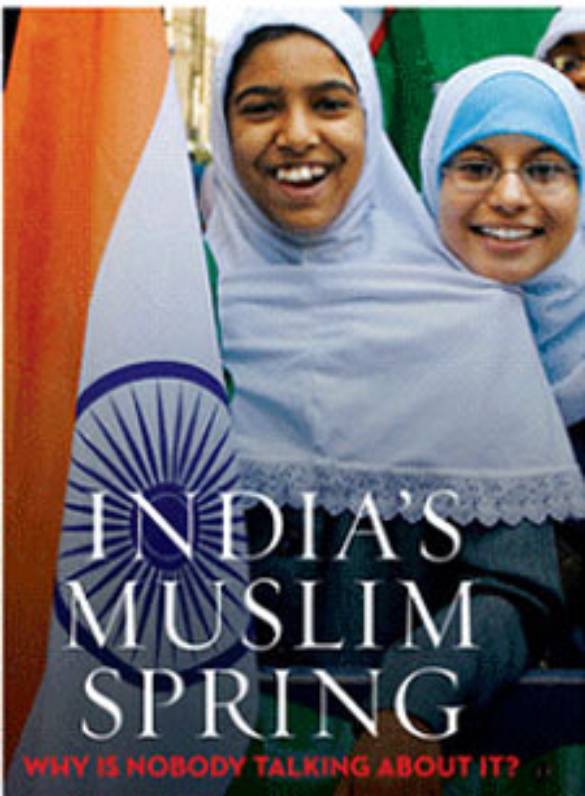 India's Muslim Spring: Why Is Nobody Talking About It?,

Paradoxically, at one level this is also perhaps the most religious post-independence generation of Indian Muslims ... . More Muslim youth wear beards today than ever before and young Muslim women proudly show off their ‘Hijabs’. ... Yet, it is also the most open-minded and self-confident generation; and—most importantly—optimistic about its future in India. India is their home and this is where they see their future.

‘It is the best place in the world,’ is a phrase that I heard over again and again. For all the talk of Muslim ‘alienation’, today’s young Muslims are remarkably well-integrated ... . Today’s young see no contradiction in being proud practicing Muslims and proud secular Indians. They find it insulting to be asked whether they regard themselves as Muslims first or Indians first. To them the question smacks of the questioner’s own prejudices. On the Muslim street, it is dismissed as a ‘bogus’ debate contrived to force Muslims to choose between their religion and their country—a choice that Hindus are not asked to make.

‘It is a false choice that we are asked to make. Call me an Indian Muslim or a Muslim Indian, it makes no difference. When I’m abroad and people ask me my nationality I simply say I’m an Indian, but when they ask me my religion I say I’m Muslim. It’s as simple as that. There is no question of one taking priority over the other,’ said Ishrat Jahan, a hotel executive.

... Indian Muslims are having their own ‘spring’. It may not have the shape of an organised movement, and we may not see people going around waving banners or picketing ‘mullahs’, but it is genuine, widespread, and it looks like it is here to stay. The media has largely ignored the change that is sweeping India’s Muslim community and continues to play up the extreme voices because they make ‘news’. Yet, five or ten years from now, it might realise that it missed the biggest story of its time unfolding right under its nose.

Living through the worst phase of Indian Muslim fundamentalism from the 1970s through to the 1990s, I never thought I would live to write its obituary. The depressing prospect of having to live the rest of my life in a climate of competitive Muslim-Hindu fundamentalism, feeding on each other in a toxic double act, was one reason why at an age when many migrants contemplate returning ‘home’, I decided to take a break from India and moved to Britain. I simply couldn’t take it anymore.

At one extreme, there was the creeping ‘Hindutva-isation’ of India with a resurgent Hindu Right flexing its muscles, and at the other, a wave of Muslim fundamentalism dragging the whole community into a long dark tunnel of isolation... . With such friends, Muslims didn’t need external enemies. ... The Babri Masjid fiasco was as much the doing of chest-thumping Muslim ‘leadership’ as it was a calculated act by the right-wing Hindu middle class, to humiliate Muslims. Arbitrary ‘Fatwas’ based on the most regressive of interpretations of Islam were commonplace. I heard of more Fatwas in the 1990s than I had in the previous half century. Those who didn’t agree with the fundamentalist view were denounced, portrayed as closet ‘RSS stooge’, and hounded.

That was then. A decade later, there is a sea change, thanks to the coming of age of a new generation of Muslims—less excitable and wiser—having learnt from the follies of their predecessors. And certainly more realistic about their place in a Hindu-majority India. All you need to do is to get out a bit more, talk to people, listen to the voices around you, and you’ll discover how refreshing the air smells today ... .