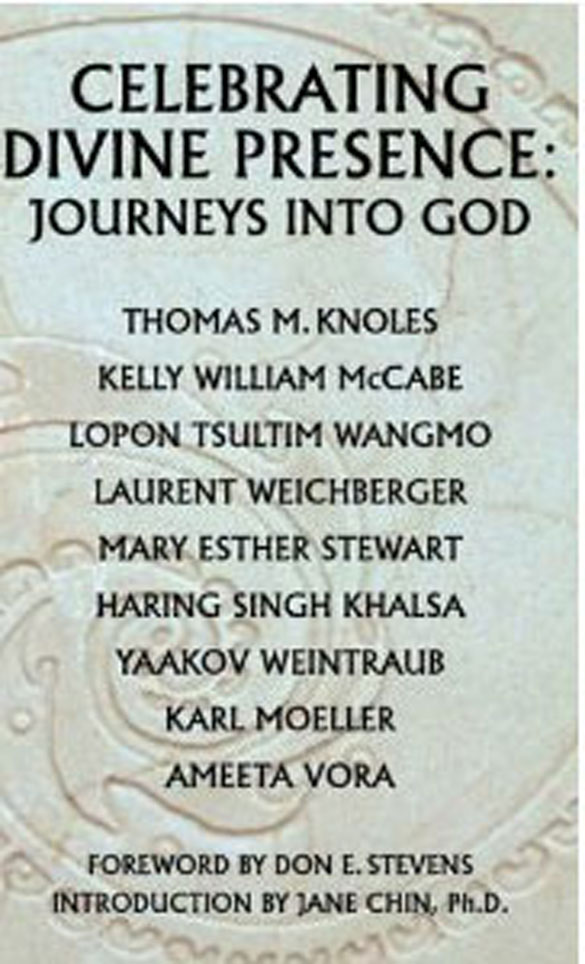 A Happy Blending of the Head and the Heart

“Celebrating Divine Presence” is a book that aims to—and in so many ways succeeds at—revitalizing our experience of all religions by bringing them together as “beads on one string,” to quote the words of the twentieth-century spiritual master Meher Baba. In these chapters, the authors, all practitioners, and many scholarly, invite you into their personal faith journeys. The tone of this book is personal and conversational, while also featuring in-depth studies of ten religious traditions. This book represents a happy balance of the heart (personal experience and autobiographical narrative) and the mind (rigor in fidelity and creativity in insight).

“Celebrating Divine Presence” begins with an excellent chapter on listening, a fulfilment of Martin Buber’s ideal of the “Life of Dialogue.” This is a book born of the “Beads on One String” project to create an Interfaith context for dialogue. Brilliantly, Laurent Weichberger shows us how the great religious founders are “exemplars of listening.” (And of course. The Jewish creed is called, and begins with, the word “Listen!” [*Shema*] And listening involves learning to appreciate others’ differences.) Rumi began his great *Mathnawi* with the word “Listen,” and similarly, this is a book to be listened to for the music beneath the words.

Foundational exemplars of listening appear throughout this book’s pages in different contexts—a dynamic which enlivens the book. This is a book with insights into (the elsewhere grossly understudied) Zoroaster, as well as Abraham, Rama, Krishna, Buddha, Jesus, St. Catherine, Muhammad, and Meher Baba. Each of these figures are treated in detail and with feeling. (Along the way we are even granted the rare experience of reading a Zoroastrian prayer. [p. 41]) In a number of chapters, we glean perspectives also on contemporary seminal spiritual teachers, especially: Sri Ramakrishna, Swami Vivekananda, Hazrat Inayat Khan, Maharishi Mahesh Yogi, and Meher Baba. One of the great strengths of this book is that it exquisitely and precisely articulates an understanding of the much over-used and little-understood—though perhaps James Cameron’s film has helped—archetype of the Avatar. Levels of sainthood and God-Realization are clearly explained. A very beautiful interlude section describes what I take to be a one-page answer to the question, “What would Saint Francis do—in this day and age?”

This book teaches us how we can stop derogating religions and stop exercising prejudice toward people of other faiths, by showing the commonalities of the “one string” among all people and all faiths. In Laurent Weichberger’s chapter on “Ancient Mysticism,” he creates a new paradigm for thinking about the differences and interrelationships between various religious traditions and he diagrams his creative insights brilliantly in three dynamic charts. This chapter is a wonderful orientation to the World’s Religions and their interrelationships.

The chapter on Sufism is a masterpiece. Written by a practicing Sufi with deep and extensive personal, community, and global experience, Karl Moeller, surveys the vast range of types of Sufism as well as the vast ranges of phenomena and traditions—both in Islamic Sufism and in Universalist Sufism. Moeller clearly explains Sufism’s roots in the Prophet Muhammad’s mission and his teachings and practices. It includes sufficient information on the foundations of the Prophet’s example and the Qur’an for the novice to proceed into this survey of Sufism. Passages from Qur’an and hadith have been deftly selected. Moeller discusses the relationship of Sufism to Islam. He explains the model of spiritual psychological transformation, the seven levels of the soul. Moeller explains the role of saints (*Wali*) and of Axial Saints (*Qutb*. The chapter also explains the attributed spiritual blessing-power (*baraka*) that saints are sought out for. Moeller explains the practice of seeking intercession through saints. The very popular, wide-spread practice of visiting (*ziyara*) saints’ tombs is discussed and described. A beautiful feature of this chapter is the explanation of the dynamics of lineage and the samples of actual lineage-succession lists (*silsila*). The teacher-student or master disciple relationship, so central to Sufism, receives extensive analysis. Sufi meditational practices (*zikr*) and the spirituality of listening (*sema*) to sacred music are discussed. A great number of Sufi-lineage traditions (*tariqa*) are discussed in depth and others are listed. Moeller also comprehensively surveys contemporary expressions of Sufism, both globally and in Europe and America. Delightfully, Moeller includes the Sufi wisdom-humor stories of Mulla Nasruddin Hoja. There is even a sort of “FAQ” included. Copious quotes from Sufis, including Rumi, appear.

The Judaism chapter rang true for me when I saw that its author Yaakov Weintraub immediately highlights the Friday-dusk-to-Saturday-nightfall Shabbat that for many Jews defines or sets a standard for being Jewish. Its topics include God, Torah, the Holocaust, Halakha (“the Law”), and the Chaggaim, the holidays. This chapter’s exposition is enriched by personal narrative and poetry. Two chapters on Hinduism treat all the basics of the family of Hindu traditions: Veda, Vedanta (in its varieties), meditation (and brain research on its effects), and all the yogas of devotion (*bhakti*), knowledge (*jnana*), action (*karma*), and topics such as liberation (*moksha*), or God-Realization (*jivanmukta*). Spiritual paragons, their lives and teachings are also discussed: Sri Ramakrishna, Swami Vivekanada, Swami Shantananda. Worship of the Mother Goddesses, idols (*vigraha*), and Avatars are also explained. Detailed instructions are provided for practice of each of the four major forms of yoga.

A beautiful “Images” section extends the beauty of this book. Other chapters survey Jainism in detail, Tibetan Buddhism in a way that brings to life the Budddha’s teaching, Christianity in full scope. Through a combination of personal witness and diligent scholarship, Mary Esther Stewart makes Jesus Christ very real and relevant. She provides creative analogies for the Trinity. She explains liturgy, sacraments, saints, monastic orders and Church hierarchies. In the course of a personal narrative, she gives a beautiful summary of Pierre Teilhard de Chardin’s vision of “world justice, dialogue, and peace” (p. 293) and explains Vatican II. She then creates a moving portrait of Saint Francis. Then follows “If Saint Francis Were Here,” a wonderful one-page summary of what Saint Francis would say and do today, with a beautiful illustration of Saint Francis.

The Punjabi-based Sikh religion (*Khalsa*) is also beautifully explained with wonderful quotes from its founder Guru Nanak’s prayers, its rich tradition of Hindu and Muslim devotional poetry. Guru Nanak comes to life in these pages.

Then editor and coordinator of the “Beads on One String” project, Laurent Weichberger then proceeds to survey “Modern Mysticism.” Here he discusses Sri Ramakrishna, Hazrat Inayat Khan, Rabia Martin, and Avatar Meher Baba. Meher Baba’s life and teachings—at least in terms of a 32-page summary—are given extremely insightful, detailed, extensive, and expert treatment. Weichberger even succeeds in explaining in accessible terms one of Meher Baba’s most elusive of paradigms, the “Ten States of God,” from Meher Baba’s magnum opus, “God Speaks.” Weichberger describes these in a down-to-earth way that complement the more formal explanations of Meher Baba and many of his interpreters. In these pages Weichberger shares many important Meher Baba quotes and presents Meher Baba’s Universal Prayer, the O Parvardigar prayer, laid out in a poetic verse form that is the easiest to read of any printed version I have seen. Weichberger follows with a section on “Sacred Places,” detailing all the various holy sites of all the world’s religions featured in the book that Meher Baba himself visited, made pilgrimage to, or at which he meditated.

“Celebrating Divine Presence: Journeys into God” is an invigorating, inspiring, instructive read and also a great research resource. I salute Laurent Weichberger and the “Beads on One String” project for this ripe fruit of their seminars, dialogues, and communion. This book is a model for Interfaith dialogue, global citizenship, and the study of World Religions. This comprehensive and insightful book on 10 spiritual traditions helps to address Islamophobia—and other less pronounced phobias—by contributing to an experience and understanding of spiritual sharing, commonality, and kinship among the *people* who practice the religions, and even, ultimately extending to a kinship among all the faiths themselves brought “together as beads on one string.”