A Hizmet Approach to Rooting out Violent Extremism 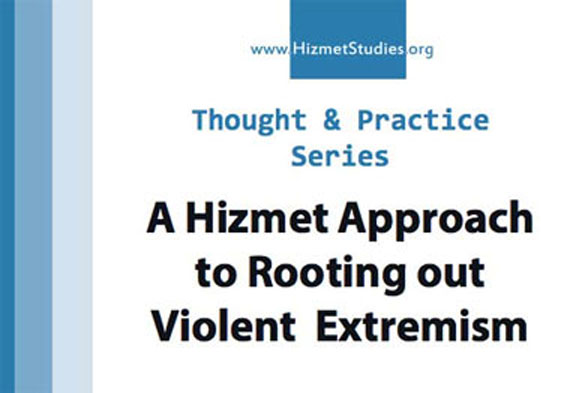 The violent extremist ideology cannot be rooted out until an effective, coherent, comprehensive and well-reasoned counter-narrative is evolved. For that, all the theological, religious, political, historical, instrumental and socio-psychological underpinnings of the global jihadism have to be counter-argued and dismantled. “A Hizmet Approach to Rooting out Violent Extremism” by Ozcan Keles and Ismail Mesut Sezgin produces a case study in this context. It provides a critical and detailed analysis of the Hizmet’s refutations of the ideological, theological and text-based rhetoric of the violent extremism, which could be aptly termed ‘radical jihadism’.

Based on a case study of the Hizmet’s approach to countering, rebutting and dismantling the extremists’ core underpinnings, the theoretical focus of the book is to argue and buttress the central point that the writings and teachings of the moderate Islamic scholar and Hizmet’s founder-ideologue, Mr. Fethullah Gulen have greatly inspired the movement’s multi-faceted anti-extremism initiatives.

The Hizmet’s Ideological Underpinnings against the Violent Extremism

The authors assert that the Hizmet’s arguments against the Violent Extremism mainly rely on a “robust” understanding of the spirit and teachings of Islam’s primary sources, the Qur’an and Sunna. The founder-ideologue of the Hizmet and a progressive Islamic scholar, Mr. Fathullah Gülen propounds: “A true Muslim cannot be a terrorist and a terrorist cannot be a true Muslim because they are so fundamentally and diametrically opposed to each other, not just according to the ‘letter of Islam’ but also according to the ‘heart, soul and spirit of Islam’ (Ozcan Keles and Ismail Mesut Sezgin, 2015).

Going by the detailed analysis of this book, the Hizmet’s ideological underpinnings against violent extremism can be summed up in the fowling five points, as put forward by Mr. Fathullah Gülen:

“Muslims must confront the totalitarian ideology because every terrorist act in the name of Islam profoundly affects all Muslims, alienating them from fellow citizens and deepening the misperceptions about their faith’s ethos”.

“When terrorists claim the Muslim mantle, then they bear this identity, if only nominally and members of the faith must do whatever possible to prevent this cancer from metastasizing in our communities”.

“Muslims must denounce violence and not fall prey to victimhood”.

“Having suffered oppression is no excuse for causing it or for failing to condemn terrorism.”

“That the terrorists are committing grave sins in the name of Islam is not merely an individual opinion; it is the inevitable conclusion of an honest reading of primary sources: the Quran and the accounts of the life of Prophet Muhammad.”

The Hizmet’s theological refutation of violent extremist narratives has been worked out in a consistent, coherent and effective way. The first part of the book is titled: “Hizmet’s theological refutation”. According to the authors, Ozcan Keles and Ismail Mesut Sezgin, the Hizmet’s counter-extremism narrative or rhetoric is primarily based on a deep understanding of the foundational Islamic scriptures, the Qur’an and Sunnah. They state: “Hizmet’s position on violent extremism is based on a comprehensive, thorough and robust understanding and reading of the spirit and teachings of Islam’s primary sources, the Qur’an and Sunna – the same foundations on which its core teachings are based”.

The authors tell us that in order to promulgate his narrative of peace and counter-extremism, Gülen sought help from the popular interpretations of Badiuz Zaman Sayeed Nursi (1877–1960), an influential moderate Turkish Islamic scholar of 20th century. For instance, in his interpretation of the famous Qur’anic verse that forbids unjust killing equating it with ‘the killing of all humankind’ (Al-Ma’idah 5:32), Nursi is reported to have said:

“Every form of life manifests a unique combination of God’s names and attributes which we as humans were created to see and reflect upon in our spiritual journey of ‘travelling’ from the created to the Creator and arriving at a higher form of understanding and awareness of ourselves and God – that is the purpose of creation. Therefore, in addition to its inherent value, every form of life, be it human or not, is a unique species in and of itself”.

Based on this understanding of the Quran, Fathullah Gulen infers, as the book points out, that “people have a positive responsibility to appreciate one another and ensure the continuation of life. And, since, according to Saeed Nursi, humans are key to the purpose of creation; unjust killing is a grave injustice not just against the person killed and their loved ones, but also against the entire universe to which their existence gives meaning”.

Therefore, the book states, Gülen sees no difference between suicide bombs in London, Tel Aviv or Istanbul. Since the unjust killing of one person is a grave sin, it cannot be employed for any so-called Islamic objective. Here, the book also has quoted Mr. Fathullah Gülen as having said: “A true Muslim cannot be a terrorist and a terrorist cannot be a true Muslim because they are so fundamentally and diametrically opposed to each other, not just according to the ‘letter of Islam’ but also according to the ‘heart, soul and spirit of Islam”.

The book patently explains how Gülen offers well-considered, rethought and progressive interpretations of the Qur’anic terminologies and references such as jihad, Hakimiyah (God’s rule over the earth), Khilafah (Islamic caliphate) and Istishhad (divine martyrdom) and Al-Wala wal-Bara (love for the sake of God and hatred for Him). These are some of the Islamic doctrines that the radical Jihadists misconstrue to justify their acts of violence and extremism. Based on a canonical understanding of the primary Islamic scriptures and scriptural reasoning, Gülen’s writings and oral statements have evolved a complete and coherent literature that refutes the jihadist ideology point by point, clause by clause.

For instance, Gülen has redefined the medieval jurisprudential terms such as “Dar al-Kufr (abode of disbelief) and Dar al-Islam (abode of belief)” which were instrumentalised to present a dichotomous worldview of ‘us’ versus ‘them’. He strongly exhort the Hizmet volunteers to replace all such exclusivist terms with a spiritual Islamic concept “Dar al-Hizmah” (abode of service) viewing the whole world as one family of God (Ayal al-Allah) and hence he enjoins them to serve and help each other.  In a nutshell, Hizmet’s theological curriculum on peace and counter-extremism, freely accessible in the online media, is entirely based on a deepened, balanced and insightful understanding of the two foundational scriptures of Islam—the Qur’an and Hadith.

A ‘Positivist’ Counter-Narrative against Extremism

With regard to the Hizmet’s Approach to rooting out violent extremism and radicalisation, the authors are of the view that Gülen has developed a ‘positivist’ counter-narrative against extremist, xenophobic, intolerant, radical and violent interpretations of Islam. By counter-auguring the narratives of victimhood and conspiracy theories, Gülen has worked out a moderate narrative of understanding Islam as a peaceful, pluralistic, progressive and forward-looking faith. This is precisely what another author on a similar topic, Mr. Marthe Hesselmans has better illustrated; “The Hizmet offers an alternative take on tolerance in which a strong religious group identity is balanced with flexibility towards people, values and customs outside one's own boundaries” (“A Different Take on Tolerance? Gülen's Alternative to Islam Controversies in Germany”, by Marthe Hesselmans, Journal of the Ottoman and Turkish Studies Association, Vol. 1, (2014), pp. 149, published by: Indiana University Press).

Some of the most inspiring and guiding quotes of Mr. Fathullah Gulen that the book has reproduced could be interesting to go through:

“A person who believes in the letter and spirit of Islam is called a Mu’min (literally, ‘believer’), which stems from the Arabic roots Amn and Amanah, meaning trust, trustworthiness, peace and security – attributes that should be upheld by a true believer”.

“A believer must always follow the concept of Sirat al-Mustaqeem (the middle way), avoiding harmful extremity at every level of life including thought, feeling and even in the practice of religion”...... A Mu’min of this type is one from whom others are safe with respect to what he says and does.....the Prophet admonished those who were too extreme in their fasting and praying to the point of neglecting their homes and families”.

The book also reproduces many of Gulen’s talks delivered on the subject of “Islam and violent extremism”. In one of his talks, Gülenis reported to have recited a Hadith narrated by Ibn ‘Abbas, which states that faith leaves the body of a believer when he or she commits a grave sin. (Therefore) “since suicide bombers die in the state of committing their murderous acts, they may die not only while committing a great sin but also outside the fold of the religion they claim to be serving”. “Even beyond the reprehensible violence of indiscriminate killing, violent extremism and terrorism, Gülen offers a rethinking on the less clear forms of state-declared war”, the authors comment.

From the page number 17 to 27, the book has devoted a chapter to the Hizmet’s Positive counter-Narrative and what it calls “Hizmet’s Deradicalising by Default Praxis”. These pages conclude that the Hizmet is trying to defeat the violent extremist narratives head-on. By the “Hizmet’s Deradicalising by Default Praxis”, the authors meant the movement’s default approach which proactively address some of the underlying causes as they relate to ideology, mindset and inculcation. Thus, all the above-mentioned three parts are aimed at explaining the distinct and myriad facets of Hizmet’s approach to counter-extremism.

The book concludes that the Hizmet approach to counter-extremism and de-radicalisation does contribute to producing solutions to this growing problem. However, situations used in the book are hypothetical.A critical analysis of the Hizmet’s refutations of the extremists’ theological and ideological underpinnings clears its position that the mainstream moderate narrative of Islam, which the movement adheres to, is completely antithetical to the extremist Islamist doctrines. A holistic reading of the book proves that Hizmet’s positions on the extremists’ ideological arguments starkly contradict the mainstream spiritual narrative of Islam, which the movement claims to follow and promulgate. The book came as a part of “Thought & Practice Series” brought out by Centre for Hizmet Studies in 2015.