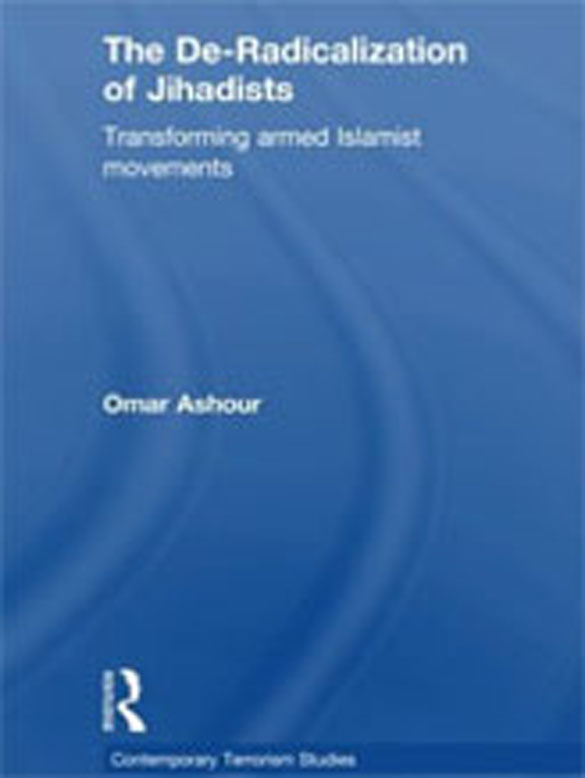 At a time when the U.S. administration has picked the label "Violent extremism", the question arises to many of us as to why some Islamophobes are miffed up with that? Why do they want to keep the word "Islamic" in bracket with “terrorism”, “extremism” or “radicalisation”?

An objective study reveals that the word “radicalisation” is extensively used by the media as well as academia to denote something very identical to the connotation of “violent extremism”.  This term was initially coined for different extremist fringes in certain political, national, ideological and religious contexts. However, “Islamism” or “jihadism” became synonymous with “radicalisation” in the global media. Most specifically, in the wake of the bombings on World Trade Centre (9/11), the London terrorist attacks in 2005, the killing of the Dutch filmmaker Theo van Gogh in 2004, the Madrid bombings in 2004 and recently perpetrated acts of terror in Paris and now in Belgium, Islam and Jihad have been conflated with the term “radicalisation” both in media and academia.

In fact, radical Islamist movements the world over, most particularly in the Middle East, have become a serious threat to the world. While the essential Islamic values and doctrines are peaceful, the extremist and radical Muslim fringes claim to engage in acts of violence with an inspiration stemming from their religious beliefs. A fresh instance is that of the recruits of the ISIS (or its Arabic acronym Daesh) in Belgium. The brazen violation of human rights by the Islamist hardliners and adherents of radical jihadism and Kharjiism continues unabated. Daesh or the self-declared caliphate of Abu Bakr Baghdadi continues to perpetrate atrocities across much of the Muslim world, much in the same way as they played havoc in Brussels.

These religious extremists seek to ‘purify’ Islam in a bid to retrieve the ‘purity’ of the ‘Salaf’ (the predecessors of Islam). Boko Haram—for instance—literally means: “western education is Haram (religiously forbidden). It loudly claims to forbid secular education replacing it with the religious sermons. For, there was no liberality or secularism in the Islamic education system in earlier times, in their view. Clearly, this goes completely against the spirit and history of Muslim education. But it is interesting to note that while the extremist Islamists loudly claim to bring Muslims back to the medieval era in the name of the Islamic Shariah, they keep upgrading themselves with modern western weaponry, employing modern approaches, advanced tools of communication including the ‘new media’, online media and digital media. Thus, they are very sophisticated and ultra-modern in disseminating their medieval, obsolete and retrogressive ideology, massively propagating a desiccated version of Islam shorn of spiritual and universal values and successfully recruiting the vulnerable section of the young Muslim generation.

The online media particularly the social networking sites have been used as tools in the hands of the radical Islamists for the radicalisation of young Muslims to prepare them for Salafist-jihadist combat across the world. Given this, the question arises: is there any evolution and integration of the moderate thoughts to curb online radicalization? The violent Jihadsit outfits have not only dominated the world's media headlines with its constant and continued ruthless atrocities, but they also run full-fledged media of their own, both offline and online. It seems as if they have captured an influential space in the cyber world.

A qualified expert on terrorism perspectives, Dr. Omar Ashour takes it into serious consideration as a baffling problem requiring a concrete solution. He authored the first detailed study on jihadist de-radicalization processes and programs, The Deradicalization of Jihadists: Transforming Armed Islamist Movements based on intensive fieldworks and interviews with Islamist, jihadist, and former jihadist leaders, grassroots, and sympathisers. In his findings, he opines that since the online jihadist indoctrination and recruitment of the Muslim youth is snowballing, an effective ‘online de-radicalisation’ against the extremist rhetoric is imperative, particularly for the moderate Muslim scholars and thinkers. He writes: “as opposed to its effects on radicalisation, the Internet can play a vital role in promoting a counter-narrative and in facilitating counter-radicalization and de-radicalization efforts”.

In an equally significant work “Islamic State: The Digital Caliphate”, the writer of this book, Abdel Bari Atwan explains how the jihadist outfits are exponentially growing with an acute grip over social media, the 'dark web', Hollywood 'blockbuster'-style videos, and even jihadi computer games.

Undoubtedly, moderate Muslims need to explore the role of the ‘new media’ or online media in indoctrinating the violent extremist narratives into the young, gullible and impressionable Muslim minds. We need to take a hard look at this vital role of online media which has been corroborated by numerous research findings. But the question for the world governments is: how the mass communication portals and social networking sites are able to facilitate the interconnection between the radical ideologues and the gullible Muslim youth in this age of tight vigil and security? This is a grim situation that should have triggered an intellectual debate on the online media and its key role in mediating and popularizing, directly or indirectly, the extremist narratives among a wider section of the Muslim audience.

The question is why the world governments’ well-considered, well-worked-out and strongly-worded strategic approach to countering radicalisation proves futile? Apparently, the political establishments don’t take cognizance of the fact that radical thoughts cannot be dismantled until a complete, coherent and cogent counter-narrative is evolved and disseminated on all the digital media. For this, all the theological underpinnings, twisted religious misinterpretations, besides political, historical, instrumental and socio-psychological narratives, of the global jihadism have to be counter-argued.

Surprisingly enough, even the hard-hitting religious rebuttals of these extremist fringes by the moderate Islamic clergy, as encapsulated in a recent global anti-terror fatwa endorsed by the world’s Islamic luminaries, have no practical imprint. The moderate Ulema’s writings and thoughts do inspire the mainstream Muslims in their effort to counter extremist messaging on social media. But online de-radicalisation is too gigantic a task for them to accomplish. Even high-tech teamwork is not able to battle the ISIS radicalisation. No wonder then, executives from Apple, Twitter, Snapchat, Facebook, MTV to Buzzfeed have failed to stem the tide of ISIS radicalisation despite their constant efforts and concrete inputs to counter online radicalization.

In an article entitled “How radicalisation happens and who is at risk” (dated March 23, 2016) a prominent online media outlet The Wire reveals how the extremist groups like ISIS recruit militants and ideological adherents are using the mass media and most particularly, the social media. It cited the example of the Australian physician who now serves in a hospital run by the Daesh in Raqqa, and serves as a recruiter on YouTube. Going by the Brookings Institute report, The ISIS Twitter Census uses social media metrics to map the geographical distribution of Daesh militants. It has also revealed tweeting patterns, follower ratio and the number of accounts followed.

The Brookings Institute has portrayed the top locations claimed by ISIS-supporting Twitter accounts. In total, the number of Twitter users connected with ISIS is 46,000. In its findings, it has also highlighted some of the key recruitment and radicalisation mechanisms use by Daesh. We may take a look at the following chart which shows a strong online recruitment base for ISIS in the countries which are caught up with the jihadist threat of the Daesh: 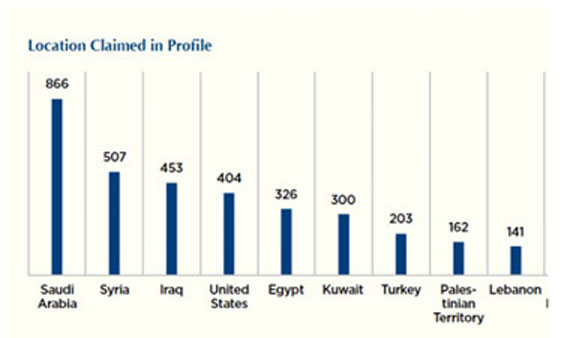 In the conclusion of his research paper, Ashour offers what could be a ‘concrete solution’ in his mind to ‘online radicalization’. The most important question he poses is: whether online counter-extremism is possible. He concludes that the ongoing online extremist indoctrination can only be countered by an online de-radicalisation. To work out an effective and impacting counter-narrative, he avers, we need to channelize digital media, websites, online newspapers, blogs, wikis, internet TV and most importantly social media. Through all this, the modern cyber-men should be exposed to the moderate and tolerant Islam to effectively counter and curb the extremist Islamist narratives.

In fact, the radical, puritanical and “the only pure Muslims” are far removed from the Islam peacefully preached and mystically experienced by Prophet Muhammad (pbuh). His lifetime (called Ahd e Nabawi) is a classic example of how people of different faith traditions peacefully coexisted as one Ummah (nation). They all lived by the Mithaq e Madina (constitution of Medina), a written agreement fostering the clauses of universal brotherhood, pluralism and peaceful coexistence of all religious communities inhabiting Medina, the Prophet’s state. Social justice, equality, compassion and mercy were the hallmarks of the Medina state.

But regrettably, a blatant strike on all these universal values and egalitarian messages of traditional mystical Islam is on the rampage for the last many decades. Al-Qaida, Al-Shabab Taliban, TTP and Boko Haram brazenly violated the basic principles enunciated in the Mithaq-e-Madina. The situation got worse by the emergence of the violent and bloodthirsty incarnation of terror outfit Daesh (ISIS). At the same time, it is also deplorable that the entire Muslim community is faced with xenophobia, Islamophobia and constant suspicions due to the spread of the intolerant doctrines of the handful extremist fringes.