In the years after Independence, especially after the passing of the leaders of the freedom movement, the contours of Muslim politics changed from secular and nationalistic to largely parochial and conservative. Diverse types of leadership then emerged.

One (and this was the minority) was of ‘progressive’ Muslims, fired with Communist ideology. According to Congress politician, lawyer, and author Salman Khurshid, ‘The “progressive” Muslims were Communists or Leftists. Though steeped in Islamic culture by way of mannerisms and attire, they were not always practising Muslims.’ What’s more, they did not see themselves as representatives of Muslim interests alone. Their politics, though nationalistic, was aligned with the international Communist movement. A large number of ‘progressive’ Muslims, especially the litterateurs, identified with Communist ideology because of its emphasis on social justice. This was because they found echoes of the Islamic principles of equality and fraternity in the ideals of Communism. Hence, even though their respective parties may have viewed them as Muslims, neither they nor their constituents regarded them as Muslim politicians because they did not conform to what was expected of a Muslim—as a result, few of them won elections.

Another type comprised the conformists. For this lot, how their constituents viewed them mattered greatly because their relevance in politics depended on their ability to win elections. In their perception, religion was not just a matter of personal faith, but a qualification for practising politics. Hence, they had to not only look Muslim but also be more Muslim than others. ‘We have to conform to the expectations of our constituents,’ admits Khurshid. ‘It helps us connect with them. Hence, issues like Namaz and Roza become important because these are the questions politicians like us are asked by our constituents.’ The dichotomy here is that many of these politicians are progressive in their outlook but are often forced to take regressive positions. Instead of inspiring their constituents to become progressive or liberal, they fuel religious conservatism. 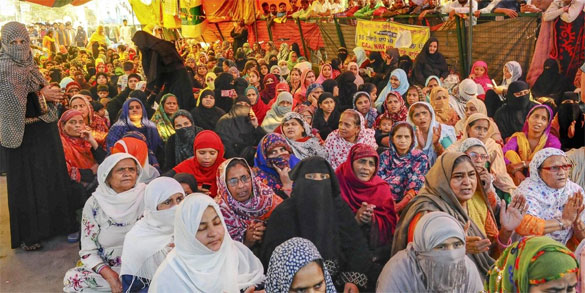 Historically, Muslims, by and large, from the days of the caliphate onwards have regarded spiritual and temporal powers as unified. Even in later centuries, when hereditary dynasties took over the function of governance, the kings maintained the façade of being guided by divine law. The ulema were part of the court. When the Mughal Empire fell, the ulema effortlessly moved into the role of community leaders, as a kind of a bridge between the state and the people.

Subsequently, when non-religious Muslim politicians emerged in the beginning of the twentieth century, their focus was the political representation of their class of Muslims, which was the Shurafa, rather than the uplift of the downtrodden. To discredit them as representatives of the larger community, the ‘nationalist Muslims’, essentially members of the Indian National Congress, turned to the ulema, mainly from the Darul Uloom Deoband and its Delhi-based associated group, Jamiat Ulama-i-Hind, to steer the Muslim masses towards the Congress and its politics. Explaining this paradox of supposedly liberal politicians seeking Muslim support through its least liberal entity, the ulema, Khurshid says that once the educated class—the AMU crowd and the landed gentry— drifted towards the Muslim League, thereby according it legitimacy, the Congress party had to find a new class of grassroots leaders whom the masses could identify with. In their perception, the ulema had that sort of persuasive power to steer the masses towards the Congress.

‘There was no choice but to pick potential leaders from the madrassas,’ says Khurshid. ‘I had once asked the senior Congress leader Narayan Dutt Tiwari why most of the Congress leaders were Brahmin. He said that was because Brahmins could mobilize people at the grassroots level. In a similar manner, the catchment area for Muslim leadership became the madrassas.’

There was another reason why the Congress party gravitated towards the ulema of Darul Uloom Deoband. Between 1913 and 1920, the ulema from Deoband ran an underground campaign which came to be known as Reshmi Rumaal Tehreek (Silk Scarf Movement) that sought the support of Afghan and Turkish rulers to overthrow the British. On the pretext of travelling to Mecca, the Deoband ulema travelled to Afghanistan and Turkey to garner support. Messages were relayed through silk handkerchiefs, hence the name. They managed to get some support from both the Afghans and the Turks. What’s more, they established communication and collaboration with the Ghadar Party, an underground movement formed by Punjabi peasants working in the west coast of the United States. Most of them were former soldiers of the British Indian Army who had migrated to the US after their military service and worked as labourers in parts of California. The British eventually caught on after some silk letters were confiscated from Punjab. The main conspirators, the leading ulema from Deoband, were arrested and deported to Malta.

Even though the ulema were trying to wage a jihad against the British, it is not clear what kind of British-free India they sought—an Islamic India or a multi-religious and multicultural country. Nevertheless, Reshmi Rumaal Tehreek established the reputation of the Deoband ulema as nationalists, as opposed to the Barelvis who had thrown their weight behind the Muslim League. The general secretary of Jamiat Ulama-i-Hind, Maulana Mahmood Madani, says with a measure of pride, ‘The ulema of Deoband participated in the freedom struggle alongside Gandhiji.’ In January 2013, President Pranab Mukherjee released a stamp commemorating the efforts of the ulema involved in the movement.

The ulema benefitted greatly from this aspect of their historical evolution. So even when university-educated, professionally-qualified Muslims sought a political career, they felt compelled to co-opt the ulema. This gave rise to the perception that to represent Muslims the leader must be, or at least appear to be, religiously conservative. A Muslim mainstream politician, therefore, started carrying a twin burden. He (it has rarely been she) would need to appear to be devout for the benefit of his Muslim constituents and flaunt his liberal credentials to his party and possible non-Muslim voters, lest he be considered illiberal or communal. A consequence of this balancing act has been that Muslim politicians are reluctant to raise issues that genuinely affect the community and call for changes in government policy or even the accountability of law-enforcement agencies. For instance, prejudice in government employment, harassment in the name of security, the blatantly partisan behaviour of state police forces, and, most importantly, the bogey of terrorism—all of which are frequently invoked to harass Muslim youth are issues that mainstream Muslim politicians rarely take up. Instead, they dabble in the same issues that the ulema do, such as the protection of Islam, Urdu language, Muslim Personal Law and so on.

Interestingly, a small section of these Muslim conformists has also aligned itself with the Hindu right wing. The BJP has always had a few token Muslim politicians in its ranks—these politicians are projected to seem bigger than the influence they really wield, both within the party and amongst the voters. However, these representatives of inclusiveness are so powerless that they are unable to register even a token protest when their fellow right-wing hardliners victimize Muslims.

Despite the necessity for minority representation in a democracy, the truth is that Muslim politicians essentially cannot do much to better the lot of the Muslim masses. Their position and power within mainstream political parties is limited to getting a few votes. Their own self-interest, insecurity, and likely inability to connect with the Muslim masses (because of their repeated failure to deliver) have rendered most of them irrelevant within their own parties.

Another kind of Muslim political leader wields influence from behind the scenes. These strongmen usually belong to organizations that have consolidated influence at the grassroots level. Leading the pack is the All-India Muslim Personal Law Board. It came into being, unsurprisingly, to protect Islam which was facing multifarious threats, both from dissenting Muslims like reformer Hamid Dalwai as well as non-Muslims.

In March 1970, Dalwai established the Muslim Satyashodhak Mandal (Muslim Truth-Seeking Society) in Pune to work towards reforming Muslim Personal Law. Two years later, in December 1972, ulema of various hues got together to establish the AIMPLB to (among other issues):

Take effective steps to protect the Muslim Personal Law in India and for the retention, and implementation of the Shariat Act;

Strive for the annulment of all such laws, passed by or on the anvil in any State Legislature or Parliament, and such judgments by courts of Law which may directly or indirectly amount to interference in or run parallel to the Muslim Personal Law or, in the alternative, to see that the Muslims are exempted from the ambit of such legislations;

Set up an ‘Action Committee’ as and when needed, for safeguarding the Muslim Personal Law through which [an] organized countrywide campaign is taken up in order to implement decisions of the Board;

Constantly keep watch, through a committee of Ulama and legists, over the state or Central legislations and Bills; or Rules framed and circulars issued by the government and semi-government bodies, to see if these, in any manner, affect the Muslim Personal Law.

Although in conversation with me, the AIMPLB’s spokesperson, Kamal Farooqui, listed social reforms as one of the objectives of his organization, the reforms that he spoke of were similar to the ones pursued by religious sects like Deoband, i.e. removing extraneous influences from Islam and ridding the Muslims of social evils like dowry, ostentatious weddings, and un-Islamic rituals. The AIMPLB came into its own when it spearheaded the campaign against the Supreme Court verdict in 1985 on Shah Bano’s case. This forced Prime Minister Rajiv Gandhi’s government to overrule the court, and instead pass the Muslim Women (Protection of Rights on Divorce) Act in 1986.

The above is an extract from the chapter ‘Minority Politics’ in Ghazala Wahab’s new book Born a Muslim: Some Truths About Islam in India (Aleph Book Company). 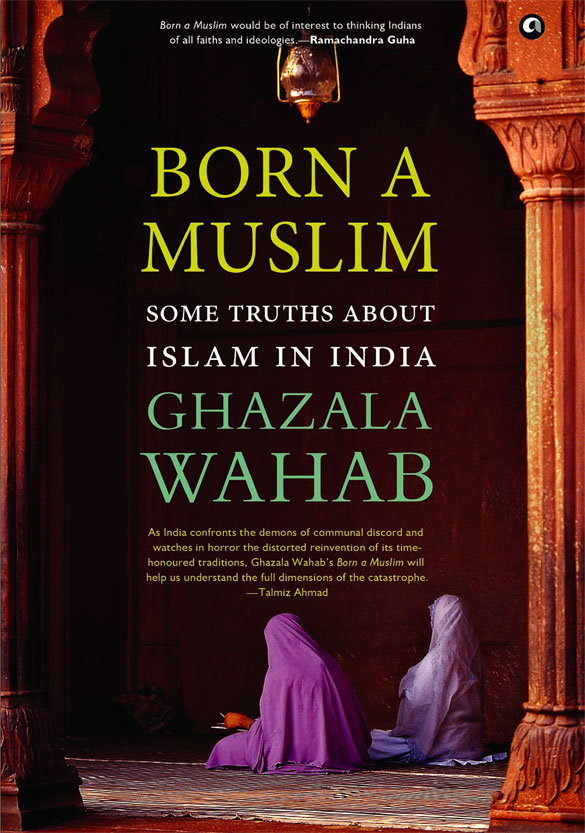 Original Headline:   Minority Politics: Notes on How Muslims Have Been Political in India